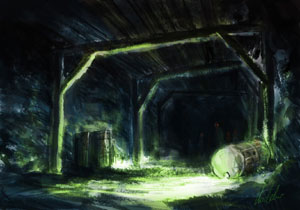 Buccas in the Diagonal Mine Shaft

It is a sleepless few hours, arriving in Bodmin at 2:00am.

The bleak wilderness slowly gives way to farmhouses and then clusters of buildings as a small village now appears in the flashes of lightning – black and white images flickering in the storm. The clicking of the cars slows. The buildings are dark and there are no streetlamps.

As the trains slows, a flash of lightning illuminates a sign by the railroad track – it reads "Bodmin". The station here is a simple long wooden platform and a small structure with a sign out front that reads “Station Master’s House”. There are several lamps invitingly glowing in the house, although the platform and surrounding streets are empty – heavy, leaden rain drenching the area.

A solitary figure comes to the window as the train pulls up – and I can see it disappear back into the house. It is the station master, Cyril Cyhyreath. He is a short Welshman in his late sixties. I would describe him as bespectacled and disheveled. He recognizes the Royal coach and had been expecting to see the train pass by several hours ago. He asks about Prince Albert – obviously flushed with excitement about see a Royal.

Mr. Dalton, the conductor, asks for a replacement brakeman. Cyril suggests they ask Matthew Weeks “as he is the new fiancée of my granddaughter Rose”. In fact, Weeks is at the station house. He was playing whist with Mr. Dalton while he waited for the train and has done some work on a train as a brakeman.

As we are meeting Mr. Weeks, Miss Sarah has a premonition about him – strongly objecting to him boarding the train. After some significant debate, a young lad named Justin – a clerk for Cyril and a train enthusiast – is brought on board. It seems like a poor choice to me. Women and their hunches. Bah!

Cyril also asks if we can take a passenger – a blind man – Old Man Franklin to St. Just to visit his wife’s grave. Franklin is asleep in Cyril’s house in front of the fire. Mr. Dalton considers it as Mr. Franklin is summoned. At last, as he approaches the train platform, Old Man Franklin has a terrible vision – and, frightened of Miss Sarah, collapses on the ground. Marleybones tries to help him, but he is dead. Sigh, another body for the train.

At this point, Constable Emmit Mathers is summoned. A thin, nervous man in his late 30’s with brown hair and eyes, Mathers speaks slowly as if trying to avoid mistakes. He is clearly out of his element here. We have him detain Eliza Curry as a traitor - again on the insistence of Miss Sarah. Doing so, he takes notes for a report to Scotland Yard but otherwise is unremarkable in helping us.

Meanwhile, Miss Moody goes into the Station Master’s house to send a telegraph to London – only to find one awaiting us which reads: NEWS OF CROWNS MINE DISCOVERY RECEIVED. B.M. ARCHAEOLOGISTS REQUEST ARTIFACT TO BE TRANSPORTED BACK TO LONDON. PLEASE CONFIRM. CONNAUGHT AND STRATHEARN.

Will the strangeness never end?

With the addition of Justin and the body of Old Man Franklin, the train again departs Bodmin – hopefully we will be back on schedule soon.

As we leave Bodmin, it is nearly 4:00am. The rain has slackened a bit, but the skies are still stormy and the night dark. As everybody retires to their cars, the train is quiet. Progress to Penzance is reasonable, but the train slows noticeably afterwards as it snakes its way toward the coastal town of St. Just.

Daybreak brings little light as great massive rolling thunderstorms pound the Cornish countryside. With the late night interruptions, all the shades on the train are pulled down and only the quiet sounds of the boys playing and telling stories break the still air. It is almost noon when the other passengers begin to stir. The tracks from Penzance to St. Just are winding and poorly maintained – part of a private line that does not meet the standards of the Empire tracks – and it is early afternoon when I see the signs for St. Just after a short jaunt along the cliff’s edge overlooking the sea. The rain has stopped but the clouds are ominous

As you pull into the tiny St. Just station – a spitting image of the stop at Bodmin – a fat man in his late 40’s with slicked back black hair – a cigar hanging from his mouth – puts a pocketwatch back into his vest.

We learn the man is Mr. Reginald Gwinnett – the Crowns Mine Foreman. He notes the late hour and begs us to begin our mine tour immediately.

Horace, Lucy, and Bufford stay behind to set up the camp at Ballowall Barrow. The train staff are staying on board to continue to repair and clean the train.

Leah, who was in the meantime sending and receiving telegraphs comes back with another strange missive. BIRD POEM FOUND IN B.M. ATTRIBUTED TO BEETHOVEN. NO SOLUTION KNOWN. CONNAUGHT AND STRATHEARN.

Arthur, Robgoblin, the nanny Emily, the tutor Cyrus and the five King of Club members move on to the mines with Mr. Gwinnett.

The Boscawen Diagonal Mine shaft is a true marvel of the Victorian Age. The shaft starts right at the edge of the sea and continues down for 250 fathoms (1500 feet) and goes out for almost a half mile under the sea. Large pump houses remove water and provide fresh Cornish air to the works.

Mr. Gwinnet tells us of an accidental discovery in the mine. “Total blind luck. We just had a hunch there was something down at the bottom of the Diagonal Shaft. We just knew if we kept digging, we’d find something. Well, this is something you have to see.”

Our ride is in old ore carts - a jarring ride down the mineshaft. Bits of dirt and dust float down from the ceiling. The walls are rough-hewn with wooden supports every six to ten feet. Some of the supports appear to be rotted. Side passages are mostly boarded up. Lanterns glow from hooks every few hundred feet. Two long metal tubes run along side the train. The tubes appear to be patched and very worn, and the sound of rushing water and air can clearly be heard coming through them. The air here is fetid – stale and hazy. There is an overwhelming sense of claustrophobia.

I notice the repressive feeling seems to affect everyone except the boys and Mr. Gwinnett. Youth!

After almost 20 minutes of descent, the carts come to a stop. A narrow shaft continues about 60 feet beyond the end of the tracks. The air and water hoses snake along the tunnel which breaks abruptly into a large cavern beyond.

The floor of the cavern is actually islands of stone surrounded by a thick black liquid – oil, Mr. Gwinnett explains. Across from me, about 100 feet away – lit by a number of lamps – is what at first glance appears to be a large natural black rock formation in the middle of the room. Thirteen large tentacles rise from the black oil like round ducts a foot in diameter near the floor, they split into smaller and smaller tubes as they arch upward to join together in a central ganglion suspended several feet off the floor. The latticework of black tubes is in stark contrast to what lies inside – a large, oblong box about the size of a coffin – made of copper.

The oil seems to move as we approach. Miss Sarah takes the boys, the nanny and the tutor back to the cart.

As we reach the strange structure, I first notice that the copper has been etched with a number of figures of misshapen humans each running to its left point a finger at the figure to the left – forming a frantic, conga line of disturbing images. Underneath the images which run the entire perimeter of the box, a number of strange symbols – an unknown language can be seen. In the light of the mines, the copper glows a blood red.

Mr. Gwinnett urges us to help him extract the box from the black columns – and we debate the matter.

Meanwhile, Miss Sarah reports that the boys have seen a bucca. Both Emily and Cyrus confirm something odd is happening. I enter the room with the shaft just in time to see Robin throw a penny in the air - and much to my surprise – it disappears mid-air. I swear I hear an evil cackle fill the air – although it could have been a squeaky wheel.

After a frantic search for the bucca – in which a loose connector pin between the carts is discovered and repaired – the decision is made to end the adventure.

As we return to the surface without the coffin – much to Mr. Gwinnett’s protests – a carriage is waiting to take us to the barrows for the evening. We promise to return to the mine on our return trip through St. Just.