Goth's Notebook Entry No. 2 - The Break In 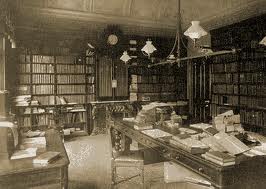 We chose to scale the lower west wing of the Estate, as this inevitably holds the kitchen and staff rooms – which will be noisy pandemonium with guests arriving. From our vantage point, we could see a cocktail party in the large downstairs lounge. From there, we quickly scaled the main building gaining the roof – the second floor windows were dark, and we wanted to enter from the furthest point from the party.

Some movement from the far end of the roof prompted us to quickly enter through the main apartment balcony on the second floor. I could swear the beast was a giant spider, but I can’t be right about this – as this creature was the size of a bear. The main apartment was in disuse, the furnishings covered in white linens – except for a solitary wingback chair. Thinking that the wind from opening the window had blown off the covering from the chair, I repaired the situation only to have the white linen lift off the chair and settle again on the floor – this time without the aid of the wind. Sitting in the chair brought forth a most amazing apparition – that of a thin man, dressed as a Colonel, with soulful green eyes. Unsure of what was happening in the dim light, I could swear it was beckoning me down the hallway. I closed my eyes, and the apparition was gone.

Moving to the aforementioned room, I could hear rain coming into the room. Opening the door showed a grisly sight – a marble coffin, now slipped onto the floor by a collapsed table, its lid slightly ajar. I move into the room, drawn by seven photographs in silver frames along the mantel - six children flanking a photo of a Colonel and a young wife. Trembling, I noted that one of the photographs was of me at a very young age – what deviltry is at work here? Before I could think, a giant spider – and this time I am sure – swung into the room. Only the shot of the tranquilizer gun saved us from a fight allowing us to retreat while the monster was still drugged.

The remaining rooms showed recent use but only as storerooms – one filled with now-empty crates. The label which read: ANCIENT ALTAR – ATLANTIC OCEAN off the coast of SPAIN. Ship to: British Museum, Ancient Antiquities. 1823.

The sound of music hastened us to move down the stairway and onto the first floor.

The door to the first floor landing was closed, but it was clear that several guards lay just beyond – their voices speaking in hushed tones – something about getting ready for the séance. The ghost of Guy Greville – our queue to disrupt the party.

On the far side of the staircase, a small window opened up onto a portico leading to the east wing of the manor. Slipping through, we moved to the far end of the building. The grounds below were quiet – nobody has heard us yet. A stained glass window had no egress, but we found another that let us into what we expected to be a chapel. Instead it was an unsettling wax museum – filled with ten figures which I describe below because of their oddity:

“Ten figures stand around this dark room - several are armed with swords and others with antique flintlocks. One is covered with a white sheet. Lighting the room shows that these are wax figures of some excellent design. They are: Agamemnon, Julius Ceasar, a gladiator with net and trident, King Harold, William the I, Richard the Lionheart, Cromwell, a Roundhead, and Wellington.”

Unfurling the sheet on the remaining figure revealed a statue of the man we know as Mr. Hyde. He is dressed in a smart Kensington suit with a top hat and wooden cane. The work is extraordinary, although the figure is cold and lifeless. It is clear that this figure is much more recently constructed than the others. Searching quickly we find a drawer of syringes filled with blood and wax. A secret door leads into a room beyond.

Intrigued we open the door, only to have four large dogs rush into the room. But, they are not dogs – just mad creatures the size of dogs. These beasts are armored with plates like a lizard with antennae and a strange whirly-gig tail. Instinctively, Bop shoots. The bullet bounces off the armor – but the noise is deafening. As I run into the chamber beyond – which turns out to be a library – I throw a knife at another of these creatures. The knife turns into dust.

Passing quickly through this secret library into a larger, formal and clearly public library – I snatch a piece of paper off a desk, stuffing it into my pockets. We move quickly into the to hall and enter the next room – just narrowly avoiding guards passing down the hallway to the library. The bedroom is clearly that of Leonora Piper – outfitted in the latest French fashion.

No time to poke around, we dash out the door as soon as the guards enter the library, into the stairwell, and down two flights of stairs to the basement. As we pass the main floor, I hear children singing what at first sound like holiday carols. However, the minor keys and slow, dirge-like tempos are unfamiliar and alien – sung in Latin, I suppose – very dark and disturbing. I can’t shake their effect.

The basement has several rooms leading off a long hallway. The last door on the right is lit with gaslight – voices of men speaking softly can be heard. They are obviously unaware of the disturbance two floors above. A quick peek - the room is filled with strange devices: rods on hand cranks that protrude into the ceiling, broomsticks connected to the ceiling with hinges, etc. These are placed randomly around the room. A number of chairs are scattered here. A large bellows is pointed toward a hole in a bricked-up fireplace.

Odd. As we listen to the men who are huddled around these devices talk, it is clear that they are going to be the “spirits of the séance” – moving tables and chairs and making whistling sounds through the fireplace. A brilliant scam!

Just at things are getting ready for the show – a strong fishy odor wafts in and an impossibly large man with dead eyes opens the door right next to me. Time for action.