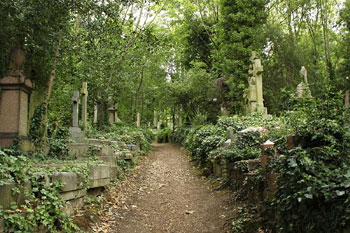 The cemetery is located on both sides of Swain's Lane in Highgate next to Waterlow Park. The Main Gate is located just north of Oakshott Avenue.

The cemetery in its original form – the northwestern wooded area – opened in 1839 and dedicated to St. James by the Right Reverend Charles Blomfield, Lord Bishop of London. 15 acres were consecrated for the use of the Church of England and two acres set aside for Dissenters. Rights of burial were sold for either limited period or in perpetuity. The first burial was Elizabeth Jackson of Little Windmill Street, Soho, on 26 May.

Highgate soon became a fashionable place for burials and was much admired and visited. The Victorian attitude to death and its presentation led to the creation of a wealth of Gothic tombs and buildings. It occupies a spectacular south-facing hillside site slightly downhill from the top of the hill of Highgate itself, next to Waterlow Park. In 1854 the area to the east of the original area across Swains Lane was bought to form the eastern part of the cemetery. Most of the open unforested area in the new addition still has fairly few graves on it.

The cemetery's grounds are full of trees, shrubbery and wild flowers, all of which have been planted and grown without human influence. The grounds are a haven for birds and small animals such as foxes. The Egyptian Avenue and the Circle of Lebanon (topped by a huge Cedar of Lebanon) feature tombs, vaults and winding paths dug into hillsides. For its protection, the oldest section, which holds an impressive collection of Victorian mausoleums and gravestones, plus elaborately carved tombs, allows admission only in tour groups. The newer eastern section, which contains a mix of Victorian and modern statuary, can be toured unescorted.

It is the alleged site of the "Highgate Vampire".

"At the front gate of the cemetery, there is a posting – “Highgate Cemetery closed after dark until further notice – by order of the Deputy Commissioner of Scotland Yard. Beware - roving bands of hoodlums have been sighted in the area at night.” Someone has painted a five-pointed star in red paint over the notice.

A path winds through the tangled trees of Highgate Cemetery – the wind causing an eerie creaking. Leaves are blown into piles about the grounds – making exaggerated mounds of debris. The graveyard is empty.

Directly across the ancient stone wall from the Piper Estate, an elaborate marble vault rises above the other tombs in the area. Above the door “WALFORD” is carved in gothic letters. The structure, vaguely cross-shaped has no windows and a small footpath leading to a set of stairs and an imposing iron door. A wrought iron fence surrounds the building, although it appears to be ornamental – much too low to keep out intruders. Several naval symbols (anchors, etc.) decorate the tomb along with the insignia of a commodore in the Royal Navy. Unlike the other grave sites, there are no trees in the Walford plot – merely overgrown brambles.

On either side of the Walford mausoleum are smaller, non-descript burial buildings. Across the path from the crypt, the ground slopes up to a small hillock. Individual headstones dot the hill and there are fewer trees."