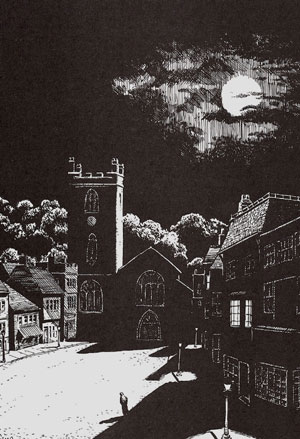 Inventor Bell has made two hollow boot heels, into which Robert can place the keys he carries. We still wonder who Miles is. Col. Deasy wires Inspector Smythe of Scotland Yard to apologize for missing lunch and to say he saw officer Garside at the docks in London. And he will figure out how to tail Constable White.

The Vicar learns that the local paper is the Tutbury Herald, run by a James Goodley. Goodley tells that there have recently been strangers in town. He also lets it known that Constable White is a bit old now, and his young assistant, Bailey, is up and coming. He mentions that Nathan Hardwicke's mother suicided, and Nathan has recently had people working up that Hardwicke House. There is to be a Grand Unveiling next at the House. Col. Deasy questions a child paper seller, Bobby Campbell, about the Constable. Eventually, he pays Bobby to tail the Constable, asking that he come back to him in the morning at the Tutbury Inn.

We learn some things about Tutbury. At the Tutbury Castle, there is said to be a ghost who haunts it, named the Keeper. He seems to say only, "get thee hence."

Robert Clark and Dr. James rent some horses and ride out to Tutbury Circle. The road they are on goes through the Hardwicke estate. We note that the stables are in ill repair. As we round a corner, some horses begin whinnying, drawing attention to us. A burly farmhand identifies himself as Nathan Hardwicke and wants us off his property. We ride back down the road, being followed for bit, but we round off the road and ride through the woods and go behind the house and up to the Stone Circle. We hear construction as we approach it. With spyglasses, we observe the activity. Dr. James sketches what he sees for Inventor Bell. There are 10 pits, 10-feet square and 10 feet deep. There are guards watching the construction, and we take cover in the woods.

Col. Deasy checks into the Tutbury Inn, as one Benjamin Barett. Georgina Rukhs intuits that Nora Donavan, proprietor of the Castle Hotel knwe the kidnapped Penny Fletcher. She also tells Georgina that Constable White is known to go to the Hardwicke House for his gambling. She describes Nathan Hardwicke as a sandy haired man who doesn't attend church. Her description does not match who Robert and Dr. James saw. Every two weeks, a Mr. Miles goes into town for supplies. He seems to be an unbathed worker.

The Vicar reads through the newspaper for the advertisements. He finds a note from one A. G. Knott of the Tutbury Mercantile, calling for help with getting more lumber and rope. Also, there is an ad from Nathan Hardwicke, calling for young servers to visit the Hardwicke House to audition as help during the upcoming celebration.

Dr. James and Robert return, and we notice that Vicar Moore has gone missing. We look for him at the Rectory, but don't find him. We meet the others in bar.

While in the bar, a man named Donald walks in, demanding the barman's last keg of beer. He won't sell it, as he needs to sell it to his guests. He goes out and begins riding away with a small wagon. Col. Deasy and Robert follow him from a distance. Up ahead they spot Constable White in the bushes and the wagon slows for him. The Constable says he needs to see Rufus and he gets in back of the wagon. The colonel notices little Bobby jumps under the wagon and holds on, tailing the Constable for him.

Eventually Robert and Col. Deasy waylay the wagon, from hidden positions. The driver, Donald, is wounded and the Constable is killed with his gambling dice in his pocket. Bobby runs away, very scared. He may need psychoanalysis. But he does have a story for the paper. Donald has a key to a large padlock, which they take.

They dump the body in the woods and tie Donald to a tree. They take the wagon back to town to find a keg. They find a real dive, called the Raven and the Rat. The proprietor, Mr. Rheinhauser, is surprised someone wants to buy his beer, let alone a full keg.

Inventor Bell disguises the Colonel. They get the keg on the wagon and ride back to the house. They meet with the tied-up Donald on the way and question him. Dr. James intimidates and senses motive with Donald. His name is Donald Dorset, and he is an explosives expert. He was brought here to blow up holes in the stone circle. There are three cases of dynamite in the shed. He's been part of the Penny Fletcher kidnapping, and she is in the house. Of Rufus Gladstone, he says he's tall and weird. There is no password on approaching the house, but everyone is recognized. We re-gagged him and head toward the house.

The Vicar returns and talks to the Colonel, who is planning to go with Mr. Goodley of the paper, to photograph the ghost. Somehow there have been spotted two ghosts at the castle! The town is in uproar. I need the Vicar to explain these happenings to me.

Our plan is to rescue Penny Fletcher. Robert and Dr. James examine the shed up at the house. It has recently been repaired. Therein are two cases of dynamite. We head over to the carriage house. Inside we find a very large (15 by 15 by 20-feet high wagon, with 8 massive iron wheels. On top of the wagon is a cage of black iron bars. We booby trapped the great large cage/wagon thing with 8 wheels. Inventor Bell was rigging up something concerning fuses and maybe weight. Regardless, the dynamite placed could be ess-ploded with rifle shots.

Meanwhile the beer has rolled on up to the back of the house. We put some chloroform into the beer to make it knock out the people in the house. Someone takes the beer inside. After 15 minutes, Bell, Rukhs, Clark and James go around to the back of house, and they enter through an unlocked window. It's a bedroom. There, Clarke finds a small glass locket with the engraving With Eternal Love and initials EH. We believe this to be from Edgar Hardwicke to his wife.

We quietly go upstairs and listen and look around. As we approach a corner in the hall we hear a very non-human sounding scream and rattling from behind heavily boarded up door to a room. We have a plan, but Dr. James really blows a dice roll for moving silently. I'm told this is the equivalent of Dr. James suddenly commenting out loud that we should "check out the Edwardian architecture." I prefer to think his shoelaces got hung up on something and he tripped. He will now be wearing loafers, from now on.

Due to the lack of silence, I just burst through a double door into the large room. I see what must be Penny Fletcher and begin shooting at her captors. Again my rolls are not helping me, and I plink some holes in the Edwardian plaster. Ruhks sees a guy duck into a room down the hall to the left, and she engages him, eventually finishing him off. I eventually wound one Aron Chadaway. Robert downs one Thomas Godwin. Dr. James and inventor Bell take a lot of damage. Dr. James uses his Queens' Scotch remedy to get back some HPs, and he does 6 cure light wounds to raise Inventor Bell's points.

Georgina asks Penny what the thing is downstairs, and she says it Mrs. Hardwicke, who was supposed to have suicided. Mysterious. Inventor Bell takes this opportunity to apply a little cocaine to lift his spirits.

We decide we should get out of the house, through the window, barring the door. As we get outside, we see the Vicar running toward the door, frothing at the mouth, crazy with fear. The door of the house opens, and Robert takes aim with his shotgun and dispatches everyone who is shooting at us through the door and windows.

We pull the vicar into some brush and Dr. James successfully performs psychoanalysis to calm him. Meanwhile the Col. is keeping the whole town at bay. Now there has been talk of some crazy man in the moors.

Inventor Bell and Dr. James, being low on HPs, take Penny Fletcher to the town, as heroes and rescuers. They need to see the town doctor.

The others check out the stable. They hear a scratching noise and a buzzing sound. This makes the vicar disappear. They leave go back to the house, to look into the boarded up room with the noise in it. Using an auger, Robert looks inside. Losing a point of sanity, he sees a man with an axe chasing 10 to fifteen children. He begins to tear at the boards to attempt a rescue, and out comes a zombie woman, a ghoul. The Vicar attempts to turn undead. Curse of the Stone (what is this?) is used. Somehow the ghoul confuses Robert into thinking that Professor Rukhs is the ghoul, so he attacks and hurts her, then he returns to normal. The ghoul runs away into the forest.

Robert and the Col. go to the stable again. They plan to use dynamite to blow up the stable and the buzzing beings inside. They toss the lit dynamite up into the loft and run. Suddenly two huge wasp-like things (Mi-go, according to Deities and Demigods) with feelers and pincers fly out of the stable, as if they could read their minds, knowing about the dynamite. One picks up the colonel and tried to fly away with him. Robert shoots it and it drops the colonel. One flies at Robert and misses him. Robert shoots at it, but neither of these seems to take damage from his weapons. Suddenly one takes out an obloid-shaped device which fires blue sparks at the Colonel, which causes some paralysis.

Now the townspeople are going to be here soon, and they will get to see the ghoul, and they'll probably burn down the house. The two Mi-go fly off to the northwest, toward the stone circle.