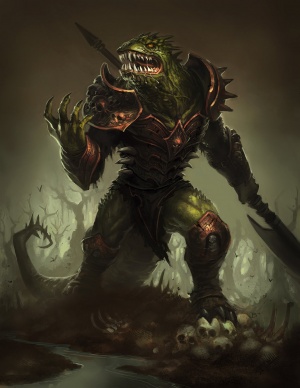 Lizardfolk are proud and powerful reptilian predators from the hostile environs of the Forbidden Lands. Their remote homeland and a reluctance to travel have left the lizardfolk regarded as savages. In earlier Ages, scholars believed that lizardfolk were mutated humans or dragon-human cross-breeds. However, lizardfolk are actually a vibrant race filled with tradition and an oral history stretching back to the First Age.

Most lizardfolk stand 6 to 7 feet tall and weigh 200 to 250 pounds, their powerful muscles covered in scales of gray, green, or brown. Some have short dorsal spikes or brightly colored frills. As their reptilian blood makes them sluggish in the cold, most lizardfolk hunt and work during the day. Lizardfolk have a very slow rate of reproduction. Though generally neutral, lizardfolks’ standoffish demeanor, staunch rejection of other race's traditions, and legendary ferocity in battle cause them to be viewed negatively by most "civilized" people. As for their tendency to consume the bodies of dead friends and enemies alike, the practical lizardfolk are quick to point out that life is hard in the desert and nothing should go to waste.

Origin of the Lizardfolk

The society of lizardfolk is based upon a worship of fire and the sun. The central figure in the milieu is the mother-figure, Llith, who is said to have been born from the lava of Ssruthu (commonly called the Scaly Mountain due to an unusual rippled lava pattern resembling serpent's scales). Llith is said to have laid a million eggs. Where the eggs fell into the water, the race of sahuagin were born. Where the eggs fell onto the earth, the greater reptilian race (lizardfolk) and the lesser reptilian race (kobolds) were hatched. The shells of Llith's eggs are rumored to be among the rocks strewn throughout the Forbidden Lands.

Lizardfolk live in a caste system based on their hatching brood. In the Reaches, the dedi and laboratus are known collectively as lizardfolk.