The Aether and The Gates 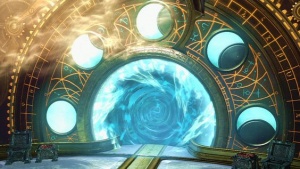 I start by introducing the concept of a dimensional world. This concept can be defined as a discrete spatial reality in which beings can exist and take action. There are perhaps an infinite number of dimensional worlds. My study seeks to illuminate some of these dimensional worlds and how travel is possible between them.

To understand how to travel between dimensional worlds, one must understand the Aether.

The Aether / The Shadows

The primary connection medium between dimensional worlds is called variously the Aether or the Shadows. This is a strange place with few fixed features or inhabitants. It is more of an extra-dimensional space than a proper dimensional world. It does appear that the Aether binds all dimensional worlds together. Historical descriptions of travel through the Aether often refer to sensations of "being drunk while running through a swirling mist of inky blackness".

In my research, I have discovered reference to a number of beings who can move within the confines of the Aether. Certainly, high-ranking members of The Family, The Dark Path, and Cult of Shadows use the Aether as a passageway through locked doors. In essence, they step into the Shadows, move a few steps, and step out of the Shadows. In doing so, they can move thousands of miles or a few paces into a sealed vault. There are also reports of spaces existing - albeit temporarily - in the Shadows. A large room may exist in the Shadows that in the Realm might be a small, dark alleyway between two adjacent buildings. Ever-shifting, the Shadows remain mostly unexplored and completely unmapped.

My research has also shown that there are creatures which inhabit the Aether - moving through it as easily as humans move through the Realm. The most important of these is Worldswing, the Great Dragon of the Ether, who has established - with the help of three powerful artifacts - a semi-permanent castle in the Aether. My encounter with Worldswing in March 832 TA was through a gate at a ruined lighthouse on Thunder and Lightning Point in the Western Reaches.

It is not clear to me whether or not beings from the Realm could survive for long in the Aether.

Gates Through the Aether

For travels over a few thousand miles and for any movement between dimensional worlds, a vast amount of energy is needed. In order to accomplish this, an artifact must be constructed - the most complex of these fills an entire room. While the location of these permanent gates and portals appear to be random when drawn on a map of the Realm, my research points to connections to the dimensional worlds coinciding with intersecting lines of force, sometimes referred to as tendrils. I have discovered several "permanent" gates in the Realm. The differences in construction - some are mechanical and others are magical - lead me to hypothesize that several groups of builders might have mastered construction over the ages. The only name I have discovered associated with the gate construction is the "Tinkerers".

More limited movement can be achieved with magical artifacts - the Pyramids of the Netherworld and the Dead Man's Coins to name two.

Here are the most interesting portals and devices that I have discovered for travel through the Aether.

I start work on four runes for my staff. The first rune, which I call Pendar, will allow me to travel effortlessly between the Realm, Oblivion, and the Land of the Dead. I will utilize a Dead Man’s coin in the forming of this rune. The second rune, which I call Voidwalker, will allow me to travel to the Void. As I gain skill and do additional research, I expect to be able to travel through the thirty-five portals at will. What treasures exist beyond, I dare not try to imagine. I will utilize a Compass of the Void in the forming of this rune. The third rune, which I call Aether, allows me travel through the shadows without limitation. My corporeal body in the Realm will become a simple extension of my far-travelling soul. I will utilize a Pyramid once used for transport in the Netherworld to form this rune. The fourth rune, which I call, Timelord, I suspect will be the most difficult to master. This rune, in combination with a locational rune, will allow me travel both forward and backwards in time. Perhaps one day I can visit the Navigators in their mighty ship before it was destroyed, or see the world beyond the end of my days. I leave the last space on my staff empty. I must admit that the last rune will be carved when I am ready to travel to those worlds outside of the tendril net which binds the dimensional worlds to the Void. I long to be the first traveler to repay the visit made by the inhabitants of Pellum to our humble world and to learn the secrets of their vast magic.