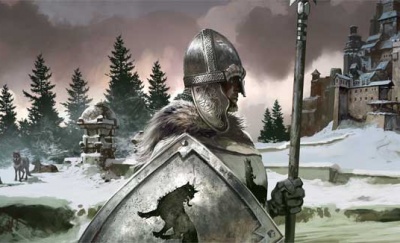 Silence gripped the town as white snowflakes drifted lazily down onto the newly-finished battlements of Dragonsford Castle. A lone sentinel stood on the wall like a statue, only his frosty breath belying any traces of life. The guard looked out over the nearby harbor, a frozen plane of ice and snow. Soon the warm sun would melt the ice, and large merchant ships would come bearing exotic goods from the far ends of the Realm. A cold blast of wind whipped over the guard. Shivering, he turned towards the west, his eyes passing over the frozen white forest and coming to rest on the village below. There, he could see several of the townspeople making last minute preparations for the Festival of the New Year. The cheerful sounds of a small choir singing a ballad drifted on the wind to the lone man high above on the castle walls. Further to the west and far out of the sentinel's sight sat the battle camps where the forces of King Gregory, exiled ruler of Teufeldorf, prepared for the Spring campaign against the evil armies of the Brotherhood of the Seven. The cackling of a nearby raven turned the attention of the sentinel to the south. There, he could see the yellow lights burning in the windows of a lone building. A thin wisp of smoke curled into the still air. The guard smiled thinking of the fresh shepherd's pie and spiced ale that he would be enjoying at the World's End Pub later that evening. For a brief instant, he thought that he could actually smell his pie baking in the ovens of the kitchen.

Inside the pub, a celebration was underway. In a private dining room near the rear of the establishment, the golden light from a roaring fire in the hearth caused the rich wooden walls to glow. Amidst a circle of six dark leather chairs sat a small table on which were four wrapped packages and a large crystal decanter of wine. Six figures occupied the chairs. They were shrouded in the dancing shadows of the firelight. "...and he was a good comrade," a deep voice boomed. Laughter filled the air as the six figures raised their glasses in a mock salute. "Come now, Vince, married life isn't so terrible. Why just the other day, Mrs. O'Barker and myself..." The robed gnome was interrupted. "This is supposed to be a celebration for U-Gene and Goldberry, not a forum for your ribald stories, Hylax," a grinning half-elf joked as he leaned forward and grabbed the wine. The remaining five figures rose and moved to have their glasses filled.

"Let's open the your gifts, U-Gene, and get this bachelor's party underway. It'll be 833 before you get around to opening your presents." Smiling, the muscular dwarf picked up the first package. It was wrapped in a thin blue cloth. "Quite book-like," the dwarf mused, looking at one of his human companions. It must be from you, Fuzzwort. "Perhaps," the cleric responded. Opening the package revealed a tome entitled A History Of Dwarven Weapons. U-Gene's eyes widened as he opened the volume. "Sorry there are no pictures, but your wife can help you with the long words." Again, laughter filled the room. The other three packages were equally well received. Soon, the book, a jeweled dagger, a small ivory statue, and a large pouch of fine hobbit tobacco sat in the midst of shreds of paper and string. "Only four packages?" the wizened gnome asked. "But there are five of us." All eyes turned towards the grinning half-elf. "What gives, Falstaff?" Before the half-elf could answer, the small wooden door leading into the room creaked on its unoiled hinges. The sounds of the crowded pub outside preceded the entrance of two figures by only a moment. The first figure was the familiar hostess of the World's End Pub. Mrs. O'Barker struggled with several large sacks which made a terrible din as they drug against the hard wooden floor. The second figure was much taller and shrouded in a long brown tunic. Mrs. O'Barker cast a disapproving look at her husband, as she backed out of the room, closing the door and leaving the sacks behind her on the floor. Hylax did not notice, however, as his attention was turned to the shrouded figure. "Any guesses, my friends?" Falstaff mused. "A dancing girl," the five good comrades shouted. From beneath the cowl, a deep rumbling laugh immediately proved the party wrong. As the six adventurers returned to the sanctuary of their warm leather chairs, the tall figure pulled back his cowl. The man who stood before them was not handsome by any means. Gaunt and unshaven, his blackened teeth showed a fondness for sweets, tobacco, and strong drink. "My friends," the cloaked figure mumbled, "I have brought U-Gene a puzzle for his wedding. A wonderful and clever puzzle compliments of Falstaff the Druid." A white bony hand appeared from within the voluminous cloak. The spindlely fingers of the man clutched two small leather pouches. The first, he handed to the dwarf. The second, he opened and dumped onto the small table. A number of clear blue gems fell from the pouch clicking on the wooden surface. "Ten thousand gold pieces worth of sapphires, my friends. Yours for the taking. All you clever fellows need to do is figure the puzzle out before I finish this fine wine." Without another word, the cloaked figure snatched up the decanter and crossed the room, taking a place near the warmth of the fireplace. The man drank deeply from the bottle.

U-Gene opened the pouch in his hands and pulled from it a simple wooden pyramid. The pyramid was small and finely crafted, each of its four sides marked with a mystic rune. "A puzzle?" the dwarf smiled. "It looks like a child's toy to me." "Our good friend insures me that this pyramid is the key to a great adventure," Falstaff explained. The gaunt merchant had finished a goodly portion of the wine in the decanter. In a few minutes, he would take back his sapphires smug in the knowledge that he had fooled some of the greatest minds in the Realm. The clock was ticking. But the puzzle remained unsolved.