Waves of the Warder

The Overlord is overthrown, and a new alliance with the young Theodric XX shows promise for peace between the Reaches and the Old Kingdom. Well, except for the fact that the entire court has just been teleported undersea. And visions have surfaced of a new menace - long predicted by the elves - promising further destruction upon the Realm.

You are standing on the high spire of Teufeldorf Castle. It is brutally cold and a storm is lashing the city. At first it seems to be nighttime, but it is, instead, mid-day - the sun blocked by the tempest outdoors. Along the shores of the Great Sea and the delta of the River White, you can see the beaches are filled with large green tendrils, crawling up into the city and surrounding lands. Amongst the tendrils, green shambling forms - perhaps mounds of seaweed from this distance - move among the streets, engaging the city guard and unlucky merchants and townsfolk. The city is under siege - but from who remains a mystery.

Sharpen your swords, dust off your spellbooks, and drink your Potion of Water Breathing - it's Matcon time again.

Dungeons & Dragons: Waves of the Warder

The Overlord of the Old Kingdom, Theodric XIX, lies on the marble floor of the Great Hall. His long, flowing white beard is flecked with crimson blood. Slowly, his hand releases a small blue-green orb, approximately two inches in diameter. The orb rolls onto the floor and then suddenly picks up speed, as if alive in its own rights. As it weaves its way through the room, any who attempt to pick it up are thwarted - always just missing the orb. It finally comes to rest at the feet of Hylax.

In the gnome's mind, he senses a great power centered on the throne room. The walls begin to contract and expand as if the Throne Room is in the center of a living breathing beast. If Hylax does not escape right now, a terrible calamity is going to befall him and his comrades. He must teleport right now, the orb can help move the party to safety. Hylax agrees.

Suddenly, the world gets wet and dark.

You are floating in the sea, salt water stinging your eyes. The light is like twilight from the surface - some 500 feet above. A school of large sharks swim near the surface, their sleek bodies gliding effortlessly through the water. Around you, the room full of nobles are thrashing about unable to breath. Some are swimming for the surface. A few seem at home in the water.

Below you is a large submerged atoll, a ring-shaped coral bed some two hundred feet in diameter. At the center of the atoll, the lies a hill of large clam shells, each about six feet in length. They are covered with green moss. At one end of the atoll, is a large green hillock, spherical in shape and some 50 feet high. It too, is covered by slick green algae. At the other end of the atoll is the hull of a sailing ship, the masts and sails are crooked and dilapidated, but the cause of the wreck appears to be a large hole in the hull about 20 feet in diameter. The ship appears to have been here for years.

Off the edges of the atoll, the seafloor drops precipitously. You cannot see the bottom of the sea here, the inky darkness absolute. Pinpoints of light show a school of lantern fish scouring the depths below.

While D&D has always been the focus of Matcon, a number of diversions have been created over the years. These have been thoughtfully blended into the campaign: Witenagemot and Warmaster providing a large-scale focus on the campaigns of kingdoms and generals; Ranger Magic providing special one-time spells for characters; and even Dwarf Poker providing a way for dwarves to lose their warchests to the forces of evil. Matcon will continue to evolve over time providing new challenges from the twisted mind of CM the DM. 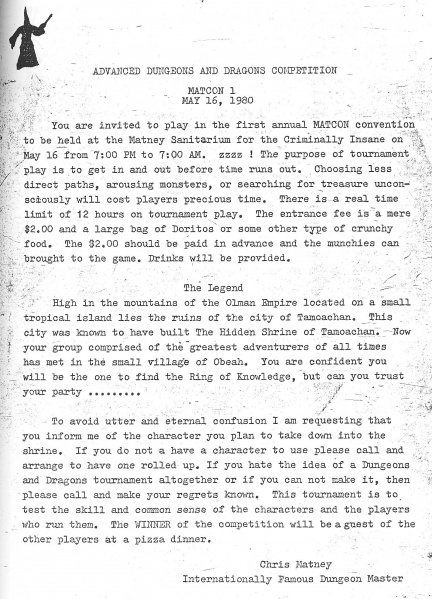