Adventure to the Troll's Bridge 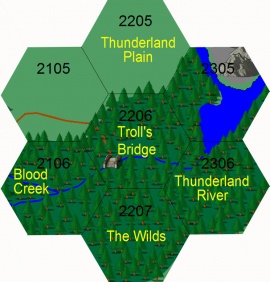 The Troll's Bridge was built in 802-803 TA by Vlag the Impaler. It was a small temple to the troll-god Vaprak. Between 803 TA and 832 TA, the trolls robbed any small or weak party that tried to cross the bridge. When confronted with unusually strong parties, the trolls merely hid in their dens beneath the bridge.

In 832 TA, a party consisting of Ernest Goodfellow, Hylax the Barker, U-Gene the Dwarf, Ohm the Barbarian, Falstaff, Vince the Invincible, and Fuzzwort the Cleric cleared the denizens of the Troll's Bridge. It is currently staffed by Eastern Reaches soldiers.

The Local Events of Dragonsford

It has been a month since your adventures in the Tomb of the Ten Sons. Recall during that adventure you rescued the cursed king. In order to break the curse and let his people rest in peace, the king had to order his people to do a good deed. It was decided that the undead villagers were to destroy the evil Troll's Bridge. It was also decided that your characters would go there to scoop up the treasure. Several adventures ago, you heard the rumor, "Did you know that there was a pile of loot under the Troll's Bridge that is so large it would take an army to move it?" It is also said that some trolls live there that are so large it would take an army to kill them. Word has come back that the undead army of Thunderland has arrived at the Troll's Bridge. Apparently, the three sons that you didn't kill have also arrived. They want to see the undead army fail. You will be going to the Troll's Bridge as the first dungeon of MatCon 7.

Closer to home, several unusual events have occurred recently. While there is no threat to the village of Dragonsford from invading armies, several spies have been found. It is thought that a number more may be lurking about the quiet streets of the town.

It is now late in November. It seems that the Eastern Reaches are safe for the time being. The passes through the Shadowyarn Mountains have been secured for the Winter, and the men of Rivershaw Castle report that the River White is safe. Rumors of spies, minions, and misshapen creatures from Pentacle run rampant through the Eastern Reaches.

It is late one night, and you are sitting in the back room of the World's End Pub discussing the tragic death of Sirfexx Ivancevio. It seems that the Champions of the Realm now number seven. The pub has been closed for several hours and even Mrs. O'Barker has retired for the night. Suddenly, the keen ears of Vince pick up footsteps, and he announces that a lone figure of human stature is approaching the inn. Moments later, a loud knocking is heard. Hylax leaves the room and returns a few minutes later followed by a grungy looking scout. The scout is one of a group of five that was sent to follow the progress of the Undead Army from the Thunderland Plains to the Troll's Bridge.

The scout, whose name is Rolm, tells you that the army will be at the Troll's Bridge in the morning. He says that the trolls are preparing for battle. They have doubled the watch. Also, a party of six large trolls left for destination unknown. Rolm thinks that they may be going for help. The scout also reports that three strange figures have been seen in the area. You assume these are the three sons who were not killed in your raid on the Tomb of the Ten Sons. Rolm bows low and leaves. Hylax suggests that everybody return home to sleep and prepare for battle. The plan is to meet back at the pub about an hour before daylight (for teleportation to the Troll's Bridge). 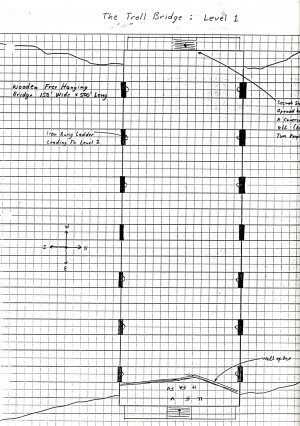 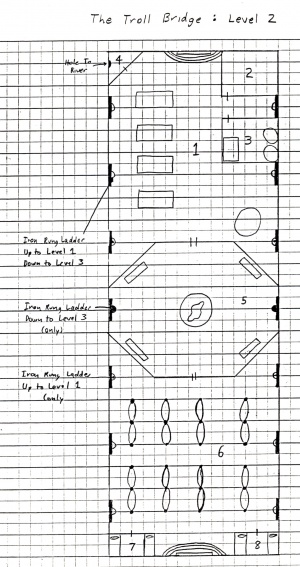 From the outside, the Troll's Bridge appears to be a wooden free-hanging structure mounted directly into the cliff face leading down to the river. The bridge is supported by fourteen posts. In front of twelve of the posts are holes in the the floor leading downward.

This room is the commons for the trolls. Four large wooden tables are set out for food. The ceilings of all of the rooms is 15 feet high. The walls are of unadorned wood. In the corner, there was a circular table used only by the troll captains (usually to play a troll game involving bones).

This revolting room is where the troll's food is kept. It is piled with several dead carcasses. In the midst of the pile is a cleaver. This is a self-serve operation. Nothing of value here.

This room is a storage room. It contains little of interest. There are several buckets of fresh water, an oak table with various vegetables and plants, and food preparation debris. There is a troll here drinking from the bucket.

This is the toilet. There is a hole to a river.

This is a temple to the troll-god Vaprak. Vaprak is a warrior god who bestows a Bless on any troll praying at an alter. Any non-troll kneeling at an alter incurs a wrath of -1 "to hit" and -1 on all saving throws. The four walls are decorated with murals depicting trolls in battle. The statue in the center is of Vaprak himself. The statue will animate and fight if a priest is in the room (at the priest's level and armor class) until the priest is killed. In the pedestal of the statue is a secret drawer which contains 30 diamonds @1000 gp each.

This is the sleeping room for the trolls. Between the number of posts, there are hammock strung. The trolls always carry their treasure with them.

These rooms are the sleeping quarters for the troll army leaders. They are very simple and austere. The trolls generally keep their treasure on their person (a lot of petty theft goes on here). It is likely (in a surprise situation) a sleeping leader will be encountered here. 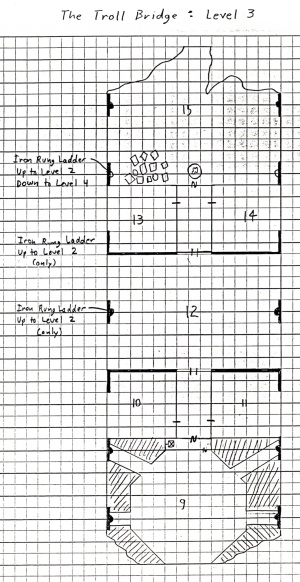 This room is used for important meetings between the priests and leaders (and other dignitaries). The walls of this room are made of wood, and a large wooden table with eight chairs sits in the center of the room. There is no meeting planned for this room, but the guards will not follow the party into this room unless ordered to by a leader or priest.

This is the treasure chamber to the Troll's Bridge. The treasure looks as if it is divided into four large piles of coins. On top of each pile are artifacts strewn about. This room is lined with metal on all sides. This is actually a trap of sorts set up by the Brotherhood.

Each of the four entrances is guarded by a powerful teleport spell which only works against non-troll creatures trying to enter the room. Any creature entering in the room is instantly teleported away.

Each of the four entrances is trapped with a powerful illusion. The illusion causes any creature which is actually teleported to appear (to any outside of the room) as if he entered the room and is functioning normally.

The teleport spell sends the party to the Valley of Mists after stripping them of all non-living items.

This is a store room for adventuring supplies and dried foodstuffs. The party can likely find most standard equipment here (including oil and torches). There is a magical statue of the troll guard here with a mildly suggestive repulse spell.

Postlog to the Troll's Bridge

The party appeared outside the Troll's Bridge. There they saw the three sons from the tomb each perched atop of three hills. In the valley between the hills, the troll army was about to engage the undead army. The party joined quickly into the battle. Falstaff summoned some lions to aid the undead. U-Gene, Vince, Ernie, and Ohm had the look of battle lust, and soon their swords were whirling blurs of light. Hylax, Falstaff, and Fuzzwort stood near the rear and cast mighty spells. Soon the party knew what must be done. The party decided to take care of the sons, and let the undead take care of the trolls. This was done, and the party made for the troll's bridge. There, they met some troll priests and guards, but all were quickly dispatched. Some treasure was taken: a spellbook, 2 necklaces, some gems, and some platinum. Down into the bridge they went. A quick search of rooms 1 - 4 provided little of interest, but the double doors at the far end of the room seemed to be magically held. So, down they went again. The storeroom was searched, and the secret door found. The party then approached the infamous hallway leading to the treasure. Here the party discussed what should be done with the treasure. A weak voice from the rear suggested, "Let's put some into our backpacks in case this is a trap." The party entered one by one. And the rest, they say, is history. It is here that MatCon 7 really begins.