Difference between revisions of "Alfric's Amulet"

This is the beginning of a six-adventure series centered around finding the pieces of Alfric's Amulet. The party will determine the order in which the adventures take place, and each will have implications on Wittenagemot (see Ginger Beddington's letter below for a list of the adventures).

Vince stares at the parchment. He walks to the window.

It is the last day of 917 TA, the Feast of Shadowfest, the Day Between Years. The moon is dark, and so are Vince's thoughts. The snow is deep outside as he looks out from the high tower. Below, the streets are filled with merrymakers - for it has been a decade of unparalleled prosperity. Long forgotten are the threats of the Old Kingdom, the yellow powder, blowing up the city.

Vince shakes his head and returns to his desk.

He shouldn't complain. The Eastern Reaches are still overrun with vampires and werewolves, although the Wolfshaunt has remained sealed. And yet the Ranger King can't quite clear his mind from the thought that tomorrow the treaty with the Old Kingdom ends. Rumors have been rampant - many gathered by Fuzzwort who seems to have taken to his role at the Consulate in Whitecliff. Some evil is brewing. Vince can smell it in the air.

A cork pops behind him.

Ah, Hylax has just sent one of his exploding bottles of bubbling wine. Terrible stuff, Vince thinks. He should probably tell the little gnome that someday. And, like clockwork, the party appears in the room - Hylax, Fuzzwort, U-Gene and Ernie. All dressed gaily for a night's celebration of drinking and storytelling. Is that a flower woven into U-Gene's beard? Vince's mood lightens. Surely nothing sinister could happen at midnight - now only minutes away.

The sound of merriment - singing and musical instruments - drifts up to the guest rooms atop Dragonsford Castle as the bells of the Church of the Hearth begin to ring in the new year. It is 918 of the Third Age.

Ernie proposes a toast to another year of tranquility.

Hylax notes quietly that he has been adventuring in the Realm for 100 years - how things have changed since taking his first humble foray into the Tomb of the Zombie Lord in 818 TA. And who can forget his companions Sir Zachary, Lord Treadway, Condor the Cleric, Father Guido Sarduici, Count Demoney III, and Ikcin Namffoh. As the last bell chimes in the new year from the Church of the Hearth, the little gnome's reverie is broken by a knock at the door.

Glancing at his companions, he wonders if this is a first-foot visitor bringing traditional Shadowfest gifts.

Instead, into the gathering walks a young woman - thin and hawkish - with blazing red hair tied into a neat braid. She wears the robes of a scholar.

Fuzzwort smiles - Ginger Beddington - the daughter of the Baroness of Greenvale. One smart girl and a favorite student of the old cleric. He had challenged Ginger to find the impossible, and from the look on her face, she has been successful - of course.

Ignoring the others in the room, Ginger addresses her master:

"Master Fuzzwort, I have completed the final task to earn my status as an Assistant Librarian of Sarth. As per your instructions, I am permitted to present my report to you in the new year - which I believe is now upon us."

"You asked me to research the records in the Great Library pertaining to the early construction of the Overlord's Palace - specifically to find a means to avoid the need to wear the Guest's Collars. And like all seemingly impenetrable walls, there is a chink in the Overlord's protection. I give you Alfric's Amulet - or a drawing of it, at least." 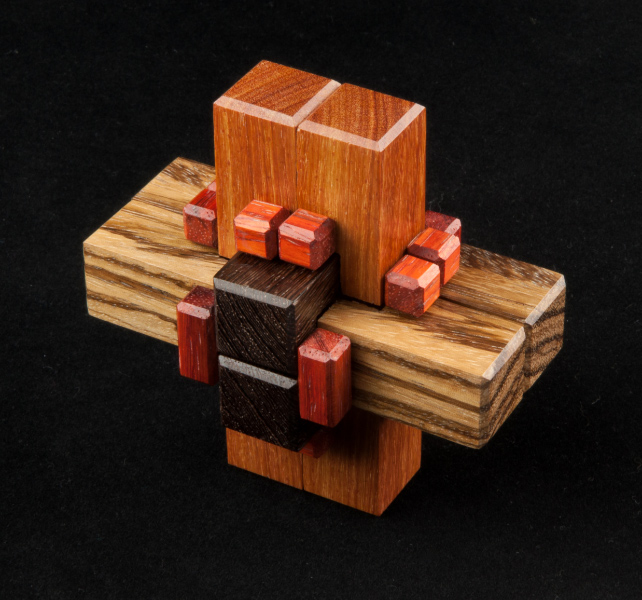 "In the late fifth century of the First Age, when Alfric's Scepter was constructed to create fealty to the Overlord, a second item was created by the elven wizards. An amulet that would allow the wearer passage through the palace without the oath required by the Scepter. The amulet, called Alfric's Amulet, was said hold six stones which could be "charged" to provide unrestricted access to the palace for a period of time. Deemed too powerful, the amulet and stones were separated and hidden - all within the protective confines of the palace."

"Here's the trick, Master Fuzzwort. Look at the picture, what's wrong the descriptions? The old translations are slightly off. The amulet doesn't "hold" the six stones. The six stones are "interlaced" to make the amulet. All this time, scholars have been looking for a physical amulet - a setting if you will - into which the stones would fit - when all they needed were the stones themselves!"

"Retrieve the stones and assemble Alfric's Amulet to charge it, and access to the palace is yours! I humbly submit this report, Master Fuzzwort, and await your decision."

Ginger is doing further research into the location of the six stones - of which she has a "rough draft" of the descriptions of the entrances from a translation.

If not detained or protected, Ginger will be found dead a few hours later in her room in Morgan's Tower.

The room is a 15' x 25' room on the east side of the third floor of the tower. A single window opens up onto the courtyard below. The bed is neatly made. The body of Ginger sits slumped at the desk, her neck cut from a garrote. Blood is pooled onto the desk. It is clear from the bloodstains that papers and books - once piled upon the desk have been taken. The door and window were locked from the inside, and there are no signs of forced entry.

Searching the room, the following parchment is found under the mattress of the bed. It is clearly in Ginger's handwriting. It is undated but looks to be freshly written - within the last few days.

Locations of the Six Stones of Alfric's Amulet
by Ginger Beddington

This should be good enough for an Associate's position at the Great Library. I know that Master Fuzzwort will ask for this information - and I know he will be pleased with my work. - GB