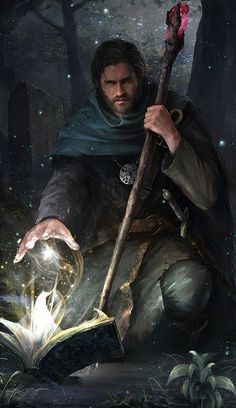 Raiments are unique set of artifacts created for heroic individuals to aid them in a particular quest or following - called a domain.

One of the most famous examples of raiments are The Voice, a set of magical items crafted to provide the Druids with a powerful champion who could put steel behind the Order's mission. In time, this singular champion spawned a following which would become the Rangers. Eventually, The Voice was deemed too powerful, and the items were hidden - until 885 TA when the Archdruid Falstaff was given Thunder, the scabbard of The Voice, by the Elven Queen to begin his transformation to the Paladin of the Balance.

There is little recorded history of the creation of raiments. Most believe the knowledge of these items is held by a small cabal of craftsmen who remain hidden except in times of extreme need. In 900 TA, Ambrose Dall appeared at the court in Teufeldorf to provide services to the three kings and their companions. His arrival coincided with the opening of the Thousand Year Gate, although no direct link has been established.

Ambrose Dall appears as a young man, of square jaw and close-cropped black hair. His eyes are grey but twinkle with flecks of many colors. He wears a simple robe with tools stuck in his belt and a plain, large sack flung over his back. His appearance gives few clues to his homeland, although a number of his tools are dwarvish or gnomish in nature. He has no discernible accent. He always appears at court and leaves court by teleport.

Raiments are formed by combining normal magical items - unlike runes which have a more complex, customized and exacting design. Initially, raiments are a collection of three items - although powerful raiments from history have been known to have more (i.e, The Voice has eight pieces).