Awakening of the Ashen Forest 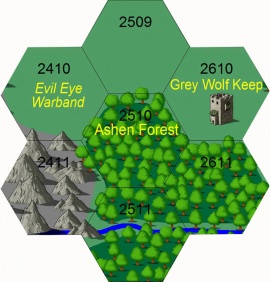 The Ashen Forest runs along the eastern and southern edges of the Plain of the Beast. It is mostly ash and cypress trees in the south turning to pine trees in the north. At one time, the forest was said to be a place of high magic. A group of druid-like men lived in the forest and were said to speak with the trees and animals. Their power was great, as was their need for secrecy. Even the trees were thought to walk like men. Rumor has it that the men had a found secret power within the forest. One stormy night, the heavens exploded over the forest and a great storm ensued. When the storm cleared, the forest was empty. The men and their secret were gone, and trees were silent. Very few wander through the Ashen Forest now, and those that do keep pretty much to the trails. Some say that the Ashen Forest is called that because it was burned down by the lightning storm.

Adventures In The Ashen Forest

With the threat of the demons put to an end, the Pass of Lar sealed from the advancing orcish armies, and the leadership of the enemy forces thrown into chaos, our heroes sought the aid of the tree ents of the Ashen Forest in order to take care of any forgotten foes. The party had learned some important information from their travels, and they searched for a high hill on which sat a ring of ancient trees. The ancient trees were actually evil tree ents which stood guard over a stone crypt. After many a long soliloquy in which Falstaff spoke to small birds and the like, it was decided that the evil trees should be passed through (unmolested) without a trace. It was a wise decision, and the party soon stood in front of a large stone crypt.

U-Gene flexed once, and the lid of the crypt was opened. Lying in state was a druid. At first, the party felt they found the druid they sought. However, a clue on a scrap of paper proved the party wrong. Thinking quickly, the party destroyed the body of the sleeping foe before any damage could be taken. Searching for secret trap doors, the party found a false bottom to the crypt. Within the false bottom was the emprisoned druid. Waking him from his curse, the party was sent on on last quest. They merely needed to go to a small castle and rescue a rare white stag.

The party found the white stag, and Falstaff polymorphed into (what else) a small bird. He flew around the castle until he found the stag tied up in the stable. The party then provided a diversion (thanks to U-Gene and Ohm), and Falstaff led the stag to safety. Returning the creature to the rescued druid, and the Ashen Forest was awake and the ents ready to fight. Another job well done.