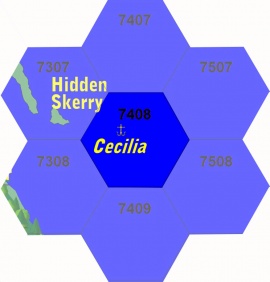 Logbook Description of the Blue Baron

The Blue Baron was the Sea Baron of the North. "Blue" is a descriptor of his balls - which were blue from the cold weather that was common in that area. The island was in hex 7705 - about 120 miles south of the Isle of Skye. the Great Storm of 766 TA destroyed his island, but he was not there. He was aboard his ship "The Cecilia" southeast of Hidden Skerry (hex 7408). His ship encountered the minions of the Temple of Heh. They sunk his ship, teleporting it deep into the cavern below where it was reconstructed. Now, the priests of Heh "adorn" the temple with items captured from other ships that pass by.

NOTE: Father Evan Black is a Priest of Heh currently masquerading as a priest of Few in Hidden Skerry. He will provide the location of the Blue Baron - to add to the collection.

The cone was the point of an ancient structure which has a strange temple at its center that "projects" and image into the world of the living. The structure is maintained by frogfolk who are building a ship to appease their master...

You notice the winds have died and the temperature of the air is dropping. Swirls of fog form as the cold air hits the warmer water around the Wanton Wench.

After a half hour, the fog is thick with visibility down to twenty feet.

A cry from the crow's nest brings all eyes to the port side of the Wanton Wench. Looming out of the dense fog is a ship - a large galleon - ghostly white and insubstantial in the gloom. You can just make out the name of the ship - The Cecilia. You can sense movement, but cannot make out any figures on board.

Suddenly, the figure of a large pirate captain - his body translucent and his bones shining white. At his throat is an emerald - casting a sickly green pallor on his ghostly crew.

NOTE: The Captain will be attempting to tell the crew of the Wanton Wench to remove the sails.

Looking over, you can see the captain and a half-dozen mates standing on the edge of The Cecilia watching the action below.

The ghosts will continue to fight unless it is pointless. At which time the ship fades, and the ghosts disappear.

DC 25: Notice that the skeleton ghosts appear to have their heads at odd angles - as if they are being hanged.

NOTE: Holy water works - the sea works better. Maybe one falls into the ocean. When destroyed, sinks down into the sea with a wail - "The salty grave. My curse."

NOTE: There will be six tsathar (frog-people) watching the ship. They will accept the sails, if necessary. Otherwise they will fight or flee.

NOTE: Wearing the black opal will cause it to glow green. It may be used to bribe the tsathar.

The Crew of the Cecilia (human ghosts)
Tsathar (12) 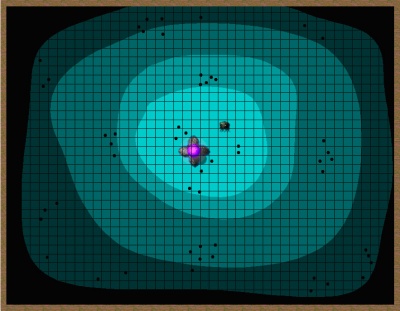 Undersea Entrance to the Temple of Heh

The air seems to be growing warmer, the fog dissipating as a gentle wind returns. Looking into the sea, you see that directly below you is a volcanic peak - the top of which is just 30 feet below the surface of the water.

Normally, it would be impossible to see the feature except for a bright round circle of light almost in the center. The surface is pocked with small holes - from which gas and steam seem to be escaping into the water. The only other noticeable feature is a strange statue that is sitting about 20 feet from the light source - casting an odd shadow into the water.

The stone surrounding the light and that of the stone statue is a dark green - a deep jade. It is shiny and looks recently polished.

NOTE: Bringing a black opal near the statue will cause it to glow green. 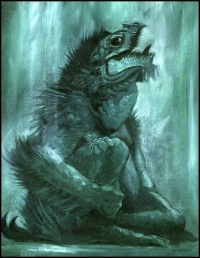 At the base of the statue is ringed with a riddle:

Precious cargo enjoyed by all,
You can take me home in a bottle,
But still I'm left on the ship.

The statue swings counterclockwise to reveal a 5 foot wide circular shaft leading down into the darkness. It is narrow, and the walls are made of the same slick green stone as the statues above. The shaft is filled with water.

At the bottom of the shaft is a wheel on the wall.

Spinning the wheel opens an iris leading down into a short horizontal passageway leading to the north.

A 20 foot long passage runs north-south with two large green stone wheels on either end. At the south end is an iris-passage on the ceiling. At the north end, the iris-passage is on the floor.

The passage is made of green stone and has intricate geometrical carvings in it.

NOTE: If the party opens the second iris without closing the first, they will be swept along by a tide of water through the iris an down into the pool in the center of the 25-foot room. Each will take 4d6 damage.

If the party closes the first iris, the 20 foot tube will empty, a STR 15 or DEX 15 check needs to be made to resist being sucked into the iris.

This will dump the party into ROOM 1.

The Temple of Heh 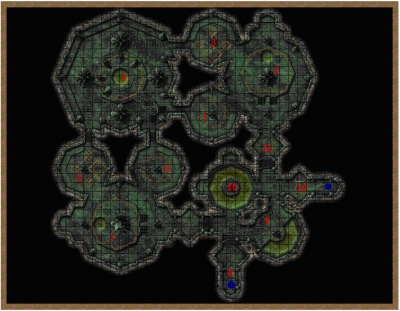 The floors, walls and ceiling of these chambers are made of green, shiny stone. They are intricately carved and gold patterns are carved in unfathomable designs. More elvish than any other common style, they do not appear to have any writing or identifiable meaning.

The ceilings are domed with an apex that makes each room seem to be the inside of a green bubble.

The water that spills into this room is quickly sucked up by a device at the room's center. A loud whirring can be heard that shuts off once the room is dry.

This purpose of this room is difficult to determine. A raised dais in the room's center has a much larger version of the machine in the previous room. To the north end of the dais, a six-foot wide hole in the floor floods the room with light.

This looks down on the Cecilia.

This room has a number of gold tracings on the floor. They flicker periodically with a yellow light.

This room has a number obelisks in it - each carved with a series of gold squares. The only writing that you have been able to decipher here are some numerals.

NOTE: These teleport the party to a random place in the complex. The big square is down to the Cecilia. The small square in the upper right is in the ocean at the top.

There are always 2 hydrodaemons here. 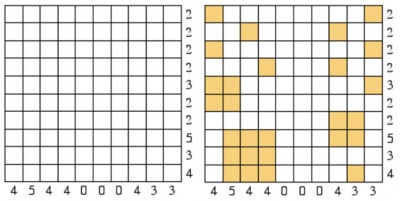 This room has a number of gold tracings on the floor. They flicker periodically with a yellow light.

This room is of the same construction as the rest of the dungeon. It is, however, piled with what appears to be human-sized eggs. They are clear sacs filled with dark liquid. Occasionally, a body or limb is pushed against the membrane - giving glimpses of flippers, strange fins and large over-developed eyes. The eggs appear to be wet.

Movement can be seen periodically.

Another altar can be seen here. This time a massive, squat and bloated frog-like creature with arms in place of its forelegs sits on a throne. The frog and throne are of green stone. Two large horns protrude above deep sunken eyes - which are currently closed.

This is where Heh speaks to his followers.

This short hallway ends in a rounded pool of what appears to be seawater.

This leads to a downward sloped passage that leads out the side of the volcano. It would take magic to find the exit from the outside, as it is covered in moss.

A chanting can be heard coming from this room. A large apparatus protrudes from the floor. Several sets of gills move back-and-forth, and the entire device appears to be breathing. Near the bottom of the strange machine, a flexible globe of brightly glowing green liquid is slowly expanding.

This is the distillery where the "water" is made for the projection room.

There is always a hydrodaemon here praying.

A disc of green stone floats above the cavern below. It is about 8 feet from the edge of the cavern walls.

The disc can be raised and lowered to The Cecilia from here - if the party has figured out the teleport.

This short hallway ends in a rounded pool of what appears to be seawater.

This leads to a downward sloped passage that leads out the side of the volcano. It would take magic to find the exit from the outside, as it is covered in moss.

As seen from above.

The room below you appears to be a large bubble of the same green stone as the rest of the dungeon. The walls are slick and shine unnaturally. The bottom half of the globe-like room is filled with a glowing green liquid - very similar in color to the opal gems. The smell here is overpowering - a mixture of salt, iron and decay.

A drop to the surface appears to be about 80 feet.

At the center of this liquid sea is a sailing ship - full sized and meticulous in detail. It is a warship of Third Age construction.

The masts are intact, with the spars extended. There are no sails on the vessel, however. Hanging from the spars are 12 human-sized cocoons of spun glass. The glass is wrapped tightly about a body, and a rope protrudes from the glass and is looped over the spar. Hundreds of other ropes dangle from the sails - all frayed and swinging gently. The floor of the ship appears to be strewn with shards of glass.

Most notable, twenty arbalests sit on the deck of the ship. In addition, you see three large chests piled near the artillery.

Nothing appears to be moving on the deck. A broken door hangs open to a fore cabin. A closed door leads to an aft cabin.

An eerie darkness spreads from the aft cabin windows - spilling shadows across the surface of the water.

Three chests: 5000 gold, Tooth of the Narwhal (+3 Rapier), Cape of the Swashbuckler

As seen from below.

Looking up, you see that the center of the ceiling - just at the room's apex has a large glowing gem-like device - similar to the one at the top of the pyramid. The gem is glowing from the light collected in the room.

NOTE: This is the other side of the "projector".

This triangular room appears to have been a bedroom at some point in the past. A bed, chair, dresser and small table are strewn about the room. However, these details are lost amidst a weave of glass strands that fill the area.

NOTE: This is the lair of several crystal spiders that cocoon any living creature that steps onto the ship.

This room is dark, and the darkness appears to be casting shadows upon the surface of the water.

All the furnishings and furniture have been removed from this room with the exception of a lone table. Around the table are four human-sized figures. They sit motionless in the room. One is a dark-haired man that the party may recognize as Father Evan Black. The other is the rotting corpse of a sea captain - this is Blue Baron. One figure is a thin woman with grey hair and piercing green eyes. She is dressed as a gyspy. The final figure is that of a man, dressed in the clothes of a noble. He wears a small emblem of the paladin Order of Crusaders. He has brown hair streaked with grey, and he has a wicked, jagged scar across his face. (Jana's minion in Portsmith).

A large frog demon appears to be a statue hiding in the darkness.

NOTE: The status is actually Heh.