Difference between revisions of "Brimstone Mountain"

Brimstone Mountain has always been a subject of superstitious awe to the neighboring villages. People still travel many miles to gaze upon this natural wonder, though few will approach it closely, as it is reputed to be the haunt of various denizens of the dark. The occasional disappearance of those who stray too close to Brimstone Mountain reinforces this belief.

Brimstone Mountain stands alone in a vast are of dismal moors and tangled thickets. There is a small natural cave in the side of a hill about two miles from Brimstone Mountain named Dead Gnoll's Eyesocket. The cave is easily barricaded to keep out unintelligent wandering monsters. Brimstone Mountain is an almost perfect conical volcanic hill formed from an ancient slow lava leak. It is 1000 yards in diameter at the base and rises about 800 feet above the surrounding land. A continuous geyser that spouts from the very summit of the mountain 300 feet into the air gives the mountain its fame, and a strong sulfur odor gives the volcano its name. The spray collects in depression downslope and merges into a sizable stream. There are stream vents in various spots on the slopes of the mountain, but none of them are large enough to allow entry. The only possible entrance into the cone is a cave on the south slope known as the Wizard's Mouth. This cave actually seems to breathe, exhaling a large cloud of steam and then slowly inhaling, like a man breathing on a cold day. Each cycle takes about thirty seconds. The locals also tell of a whistling noise that can be heard in conjunction with the steam. If it were not for the geyser, this whistling could be heard from a great distance.

Several hundred years ago, the vampire Ctenmiir was searching for a suitable haven where he could indulge his eccentricities without fear of interference. He visited Brimstone Mountain and discovered the system of old lava tubes that riddle the cone and underlying strata. With a little alteration, he thought, these would be perfect for his purposes. So, taking a fanatically loyal company of gnomes with him, Ctenmiir disappeared below Brimstone Mountain and vanished from history.

Nine months ago, six gnomes came into Derthford demanding two young people from the village to be used as slaves. When the Elders refused, one of the gnomes disintegrated the village innkeeper (Kelton Waterstone) and his wife (Abagail), took their two sons (Jason and Marcus), and burnt the inn to the ground. The gnomes vowed to return in three months and claim another tribute to their master, Ctenmiir. Since then, the gnomes have appeared twice more. The first time to take mining supplies, food, and another young man and the second time they came for food, an elderly nanny, and her eight year old charge. The village is fearful of all strangers, since the gnomes are expected again shortly. 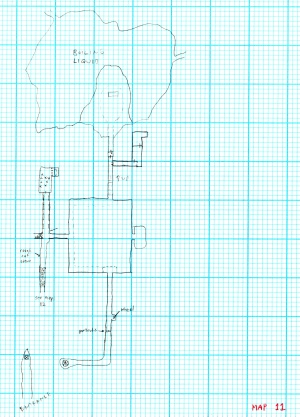 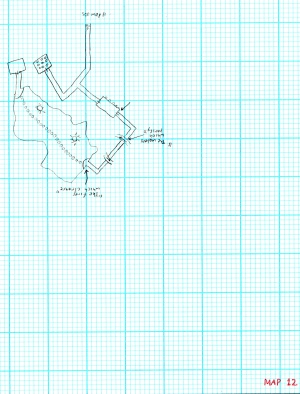 There is a fairly good layout of Brimstone Mountain on Maps 11 and 12, but there is no tale of the adventures that happened there. Briefly, here is what happened. The party stumbled out of the Cave of Strangers, and headed down a path which led down a narrow canyon. In the canyon, a group of robbers tried to steal their possessions. The robbers turned out to be members of the Merchant's Guild working for Mardon the Red. The party was able to sneak up on the cliff overlooking the ambush, and slay most of the merchants, including a leader (Penden) that wore a merchant's badge (which they later gave to the Dragon Lords). The party took what little loot they could find and wandered to the rim of the great pit. The first town that they encountered was Derthford. There, the party learned of the happenings at Brimstone Mountain. They went to investigate.

The dungeon was a maze of old lava tubes. See Map 11. After getting through the entrance to the tunnels, the party wandered along a slick flooded passageway until they encountered a large green naga behind a portcullis who asked the party a riddle (what else). "Round she is, yet flat as a board / Altar of the Lupine Lords / Jewel on black velvet, pearl in the sea / Unchanging but e'erchanging, eternally." The party guessed correctly: the moon. The party wandered north into the large room which contained a giant octopus and some sprites. After hacking their way through, the party gained some decent treasure in a hidden lair at the far side of the room.

The northern passage lead to two interesting areas. The first was the lair of the "fake Ctenmiir". The vampire legend was brought back to life by the evil wizard Tagard the Invisible who polymorphed several of his henchmen into gnomes and set them off to raid the village. The party invaded the lair. A magic mouth spouted out: "Beware, what lies beyond this tunnel is death, your death by the hands of Ctenmiir of the Dark Ways." After sliding through a spinning tunnel, the party came out to fight six "polymorphed" gnomes and Tagard. This was done and more treasure was gained. The second interesting area of the northern passage was a stone ledge that jutted out into a boiling lake (thus the steam). A thin membrane made a pocket of air for the party to travel through, but little could be seen of value here, so the party did not explore this avenue any further.

The western passage led to a fork with two passages. The northern passage contained some creatures in a prison which the party dispatched. The southern passage led down to another (unexplored) level of the dungeon. There were five sets of traps waiting any who would try to free Ctenmiir from his prison. The first was a series of glass globes suspended from the ceiling of a room. Several of the party members were stuck here for awhile. The party began shattering the globes looking for a key out. The globes contained: three shadow creatures, 300 lead coins, a potion (Green Dragon Control), an air elemental, an emerald necklace, a Ring of Flying, 11 glass gems, some grey ooze, a wand of paralyzation, six agate gems, a number of false keys, and a ring that promised many powers with the following stipulation: "I can't leave until I'm worn. However, once I am removed, my powers are lost." The party fared poorly in this trap. The second trap was five niches full of snakes and spiders. Each had a key hanging in it and a numeral above: "5, 7, 9, 11, 13". On the far wall was an inscription that read, "Beyond lies the vampire Ctenmiir / The one unlike all others / Entombed forever here within." U-Gene decided to take the key in the 9 niche because the number wasn't prime (how clever). Next, the party came to a column of water that ran through the wall suspended in air. An inscription read "The waters which purify". The party slipped under the column without disturbing the water. Next, the party came to a chasm where a series of 40 wooden disks were suspended by massive iron chains from the ceiling. The disks led a path over a boiling crevice of lava. Another inscription read "The fires which cleanse". The party avoided the disks and flew across the room. The final room bore the inscription, "Beyond this door lies Ctenmiir and his cursed belongings. Beware ye who enter here." The vampire was actually hiding above the door in gaseous form. When the party entered, he exited the room. The party found a ruby ring, a wand of darkness, a bag of 30 gold pieces, and the Helmet of Tien (made of dragon scales in the shape of a dragon's head). Later they destroyed the first three items (they were cursed) and gave the helmet to the Dragon Lords (big mistake). The party had a difficult time killing Ctenmiir (since several of them were still trapped in the globe room). Fuzzwort managed to disrupt the vampire in the end. Having finished their quest the party returned to Derthford.

The party made a very difficult trip from Derthford to Briar Forest (where they are now). Along the way, they met the rimsghouls (who almost killed them) and the Dragon Lords (who tricked them out of the Helmet of Tien and the Merchant's Badge). The party tried to follow the dragons to their home without success. It was learned that there is some sort of rivalry between various Dragon Lords for the possession of the Artifacts of Tien. 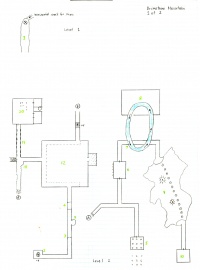 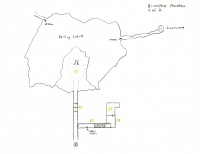 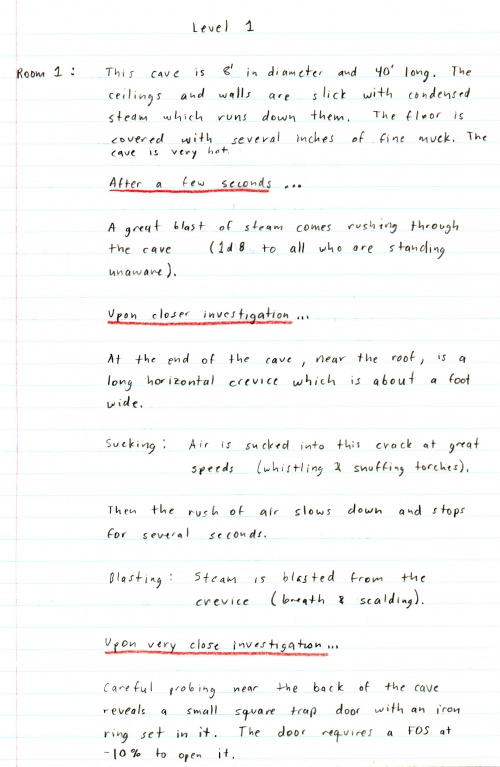 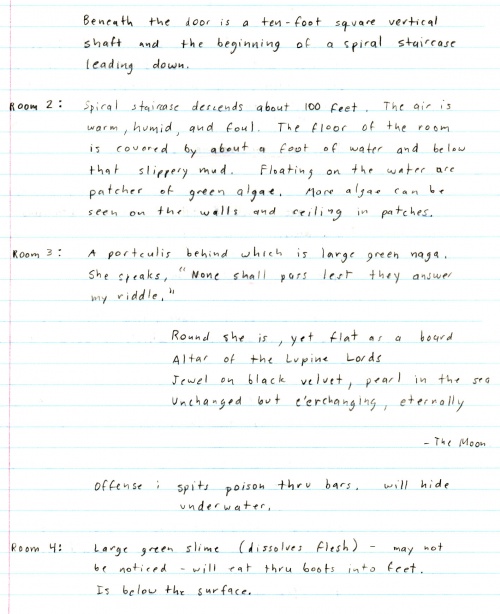 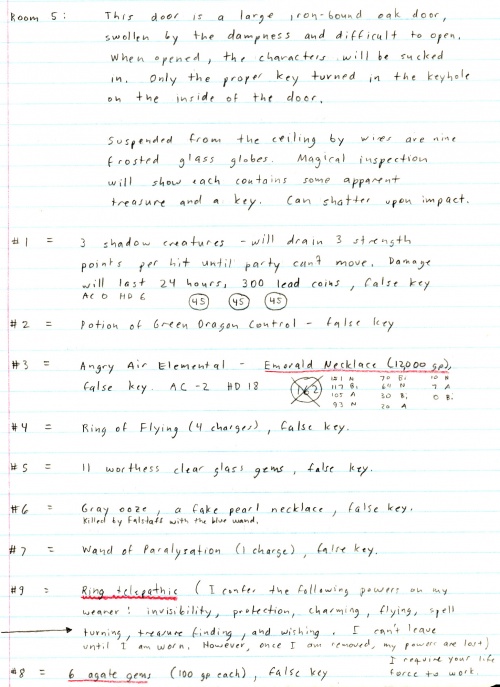 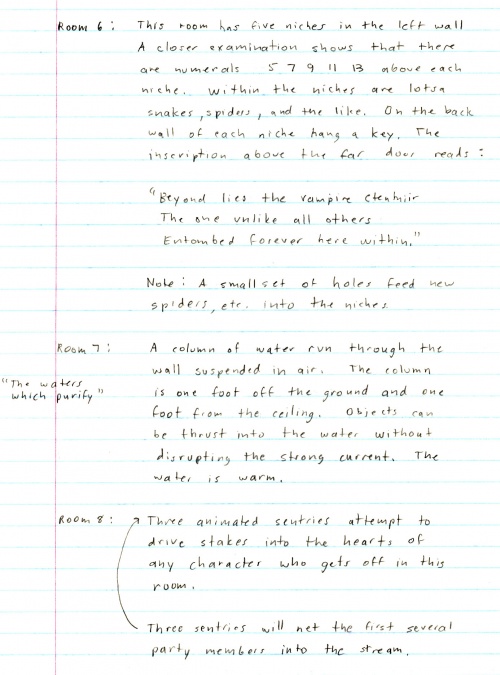 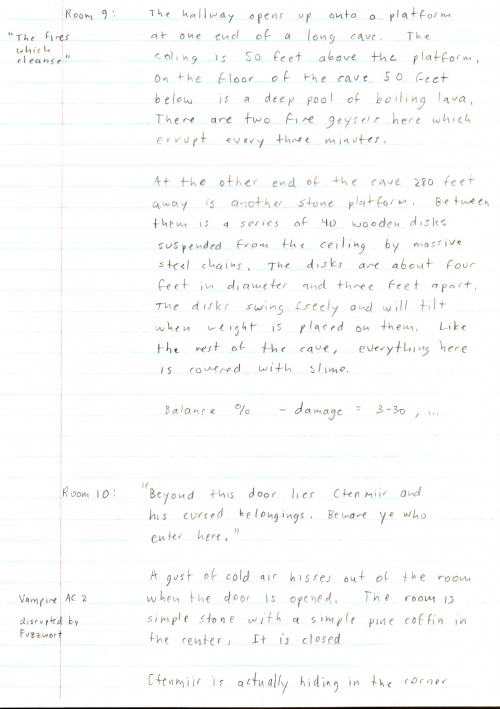 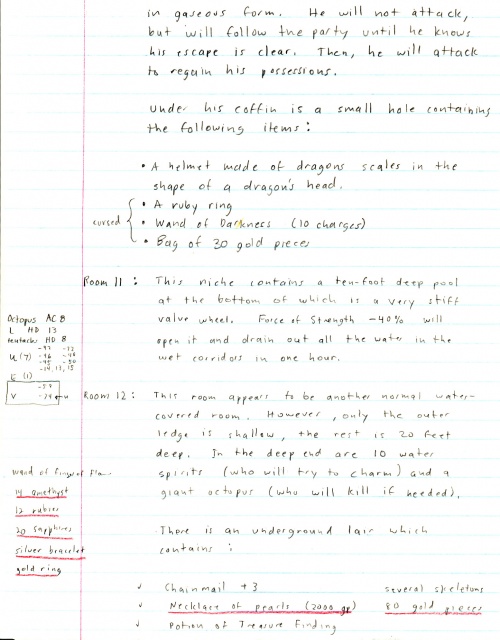 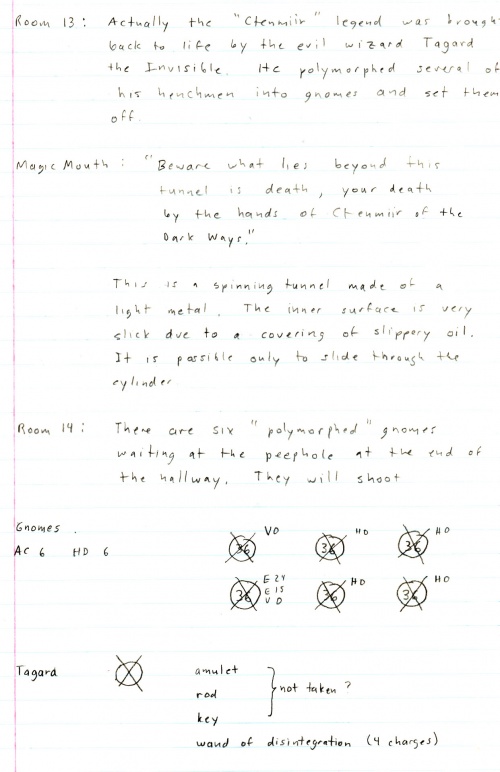 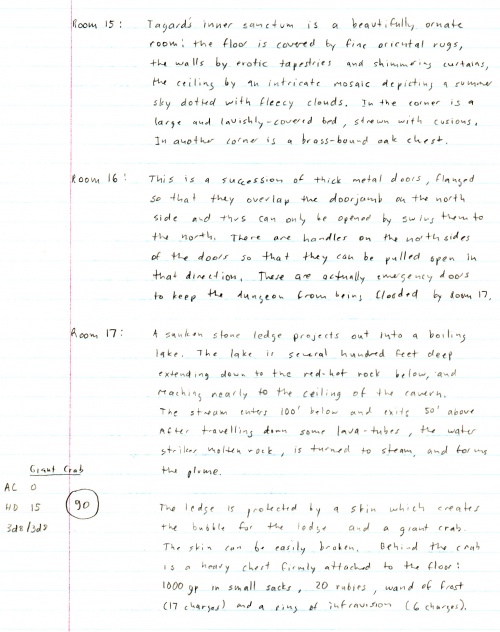