The tale begins, as it often does, during the long winter months when a message was intercepted. The message has a simple key: "We march on steadily to victory rolling over our foes."

Then, a page of dial-like figures spread across the page. 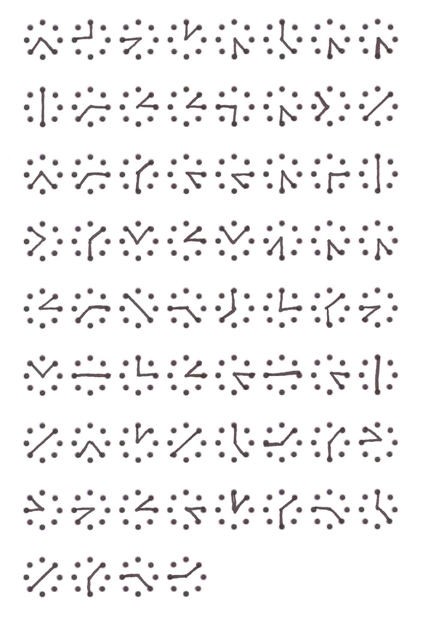 U-Gene pushed his massive wooden chair away from the table. The smoke from his pipe filled the air over the map table with a wonderful, pungent haze. Ernie smiled. It was a glorious plan. The dwarves, elves and humans of the Reaches would mobilize the most extensive army the north had ever seen. Following their glorious victories in the previous campaign seasons, the end of the Orc Nation was at hand. A war that had lasted centuries would finally be over. The orcs would be broken, their cities burned and their tribes scattered. The war would be expensive. 750,000 gold would be needed to pay the troops. Taxes would need to be raised. The stakes were high. Ernie frowned.

At the beginning, the plan moved along like clockwork. Scouts showed no activities in the South. The Tomb Kingdom was as quiet as, well, a tomb. The sands swirled around the pyramids deep in the desert, but no legions of skeletons surged towards the plains. In Sandal, Baron Valdemar was busy dealing with the recent rebellion. Taxes were suspended, and the knights were busy keeping civil order in the southern Reaches. No help for the Orcs would be coming.

It was early May when the first signs of the plague appeared. The dwarves had sieged Broken Wood, and the knights of the Reaches had sacked Dourmoor. The Grand Army of the Orcs was on the run, pinched between the Dwarven hosts from the east and the Elves in the west. The source of the plague was never determined. The sickness was first reported at Rivershaw Castle. From there, it spread south along the fertile plains hitting the heartland of the Western Reaches. While the human towns and villages were the hardest hit, the plague also moved north into the Orc Nation. There, it trailed the devastation of the army adding further destruction to the devastated orc villages and towns.

When the Loftwood Castle was sacked by humans, it seemed like even the plague couldn't slow down the progress of the Forces of Good. The orcs were seen heading south, crossing the River White at the end of June. All intelligence was that the Orcs were heading south to sack some of the castles along the coast of the Great Sea. Suddenly, the army turned west and headed straight for the City State of Teufeldorf. Dugald Axeworthy ordered all forces to converge on the city. The siege of the Orc Nation was complete. No major cities or castles were left standing. If they could catch the Siege army outside of the city walls, they could route the army once and for all.

It was a sweltering day, early in July. Some say that there was a betrayal from the inside that caused the gates to be opened. Others blamed the Elven host for the failure of the city's recently-rebuilt defenses. Whatever the reason, the Grand Army of the Orcs took the city of Teufeldorf swiftly and without mercy. As the Dwarves arrived in support of the local Elves, the Forces of Good mounted a counter siege. Meanwhile, the looting of Teufeldorf had begun. The streets were mayhem, and the people looked for their king in vain.

Three months have passed. It is now October of 889 TA. The skies have turned grey and leaden. The entire army of the Reaches has been camped for over three months around the city. The fires within the walls of Teufeldorf have been burning for over five weeks. Dugald Axeworthy spit, turning away from his vantage high on the bluffs overlooking the city. A miracle was needed. The reports were in. Over 3600 orc infantry,2000 orc cavalry, almost 2300 goblins, 700 trolls, 600 ogres, and 20 giants. All barricaded inside the walls of the City-State. Who could slay that much evil? Where were the three kings? And what of their sidekicks, the gnome, the bookworm and the Arch Druid? Dugald pulled on his mail and grabbed an axe. Another day was just beginning.

The puzzle was based on semphores with the added twist that each letter was rotated (rolled) forward one position. 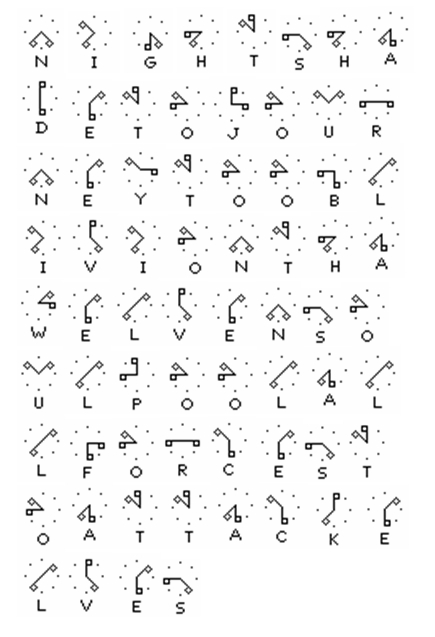