City-State of the Invincible Overlord 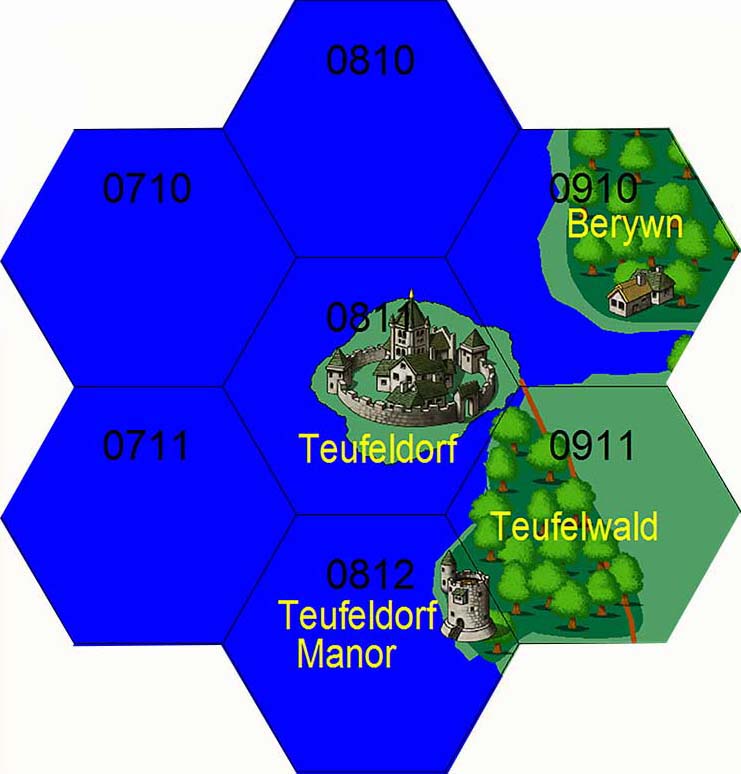 Adventures in the City-State of the Invincible Overlord

Some of the more interesting adventures and twists occurred within the cloistered walls of the City-State. It was here that Archie Bucheroni and Wilhelm Gregenhouzer bought the slave Hired Guy (H.G.). How many times was H.G. (also known as Hard Guy) shoved into a room and told to knock three times when the monsters were killed? How many times was the poor fellow tricked out of his ugly, dull gold pieces for the shiny, pretty copper ones?

But the non-player characters were not the only ones who were brutalized. The golden phrase, "He ran and he grabbed and then he got faced," could apply to one of the earliest recorded deaths in my world. It was Arnold Bucheroni that was killed (or so I'm told) trying to grab for some extra treasure.

This was also the time of great assassinations and backstabbing. There was some great stink about Art Bucheroni capturing a pegasus. As I remember, there was also some debate about the use (or lack of use) of a pseudo-dragon.

In any case, the conflicts were often bitter ones. This letter is from Art Bucheroni, and the other one is from Gomez the 23rd. Talk about intense. 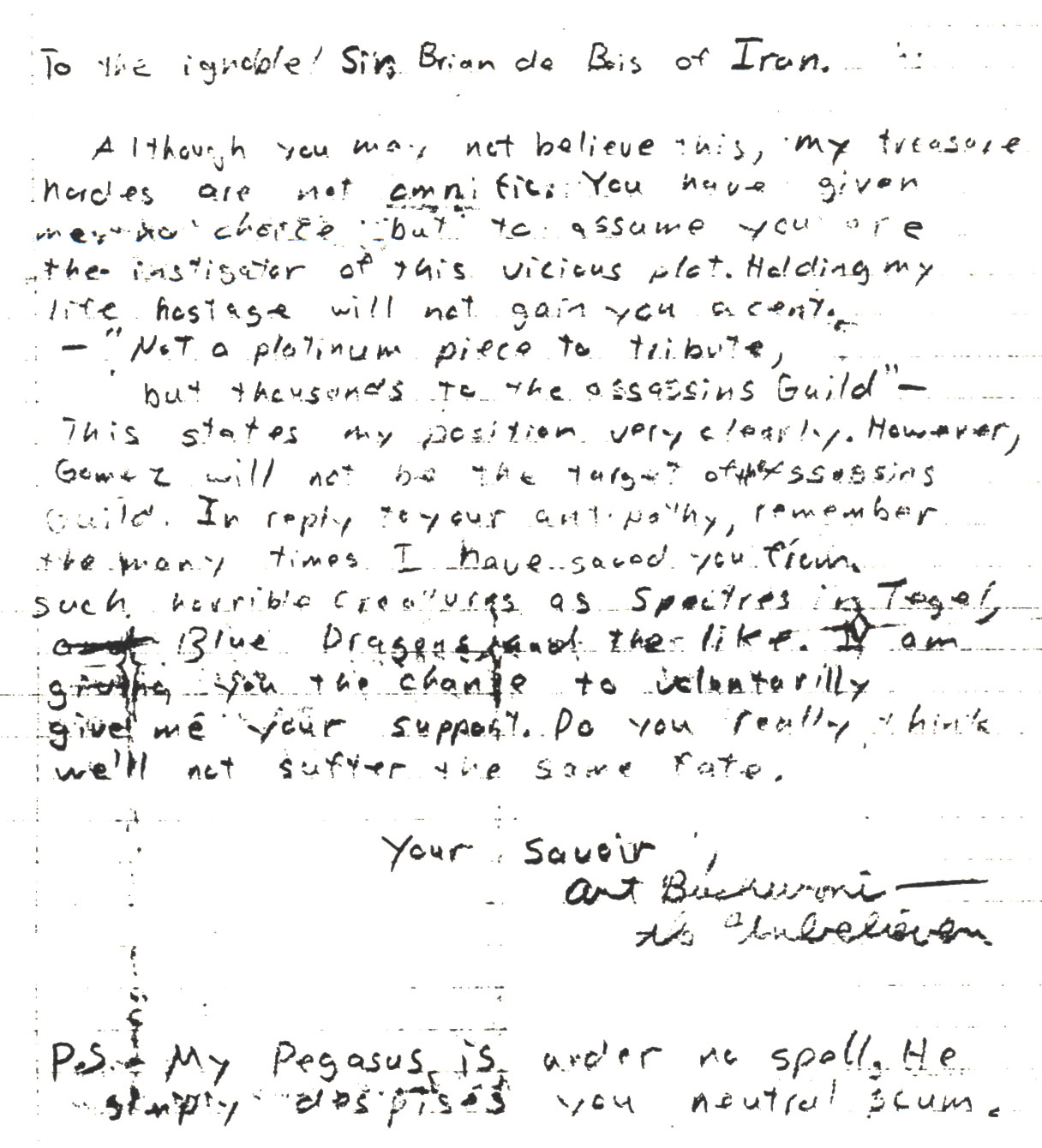 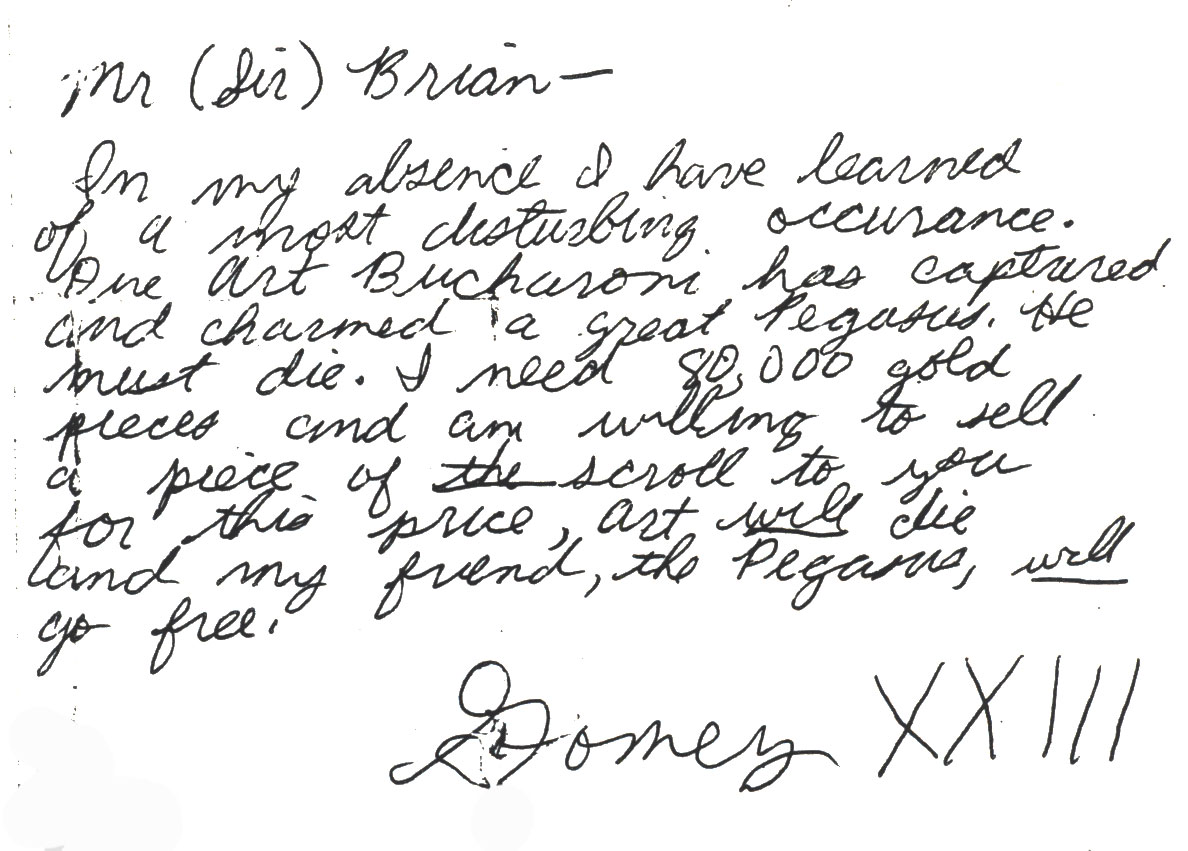 But the pinnacle of treachery came from the hands of one Mike Tapscott. Who can forget when Gollum (Mike's character) contracted to have Wilhelm (Neil's character) shot with a poisoned arrow and his body burnt with acid? I remember a rather long "private conference, Mat" afterwards. Such levels of backstabbing and general treachery have not been seen in the Realm before or since. Or have they?

There were, however, a number of other interesting town-type developments. It was a time when everybody rented their own residence (or rather shared a residence). Mike and Blake, Bill and Andy, and Alan and Neil (with shades of Star Web) shared a flat.

Many of the characters also owned a shop. Sir Brian du Bois was probably the most successful merchant (and they say D & D didn't affect our college careers). As I remember, somebody also tried to run a magic shop (without much profit), and the Bucheroni's had a sword shop near the swamps. 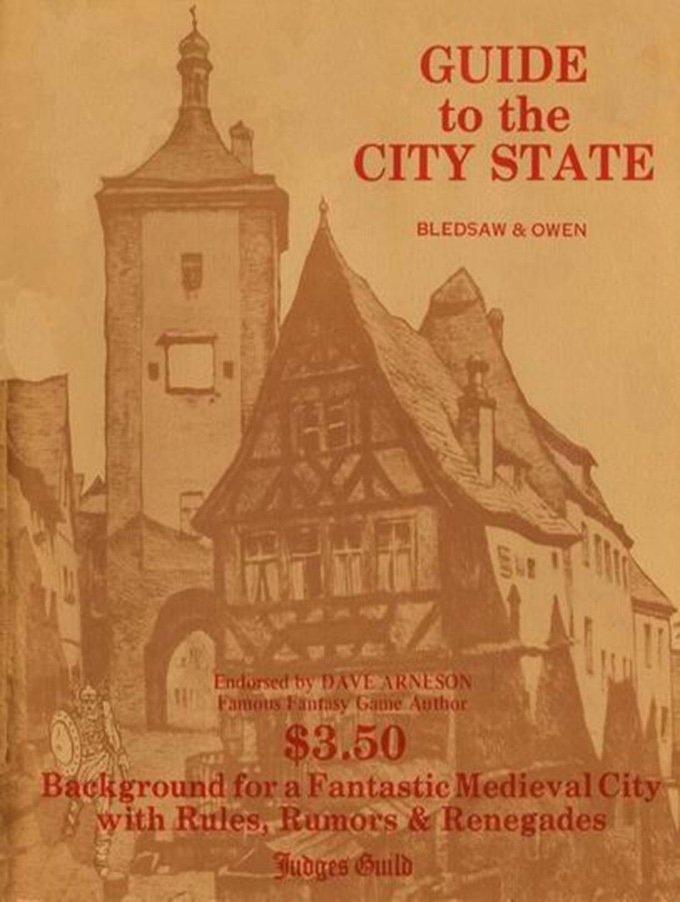