Devils of the Inferno Gate 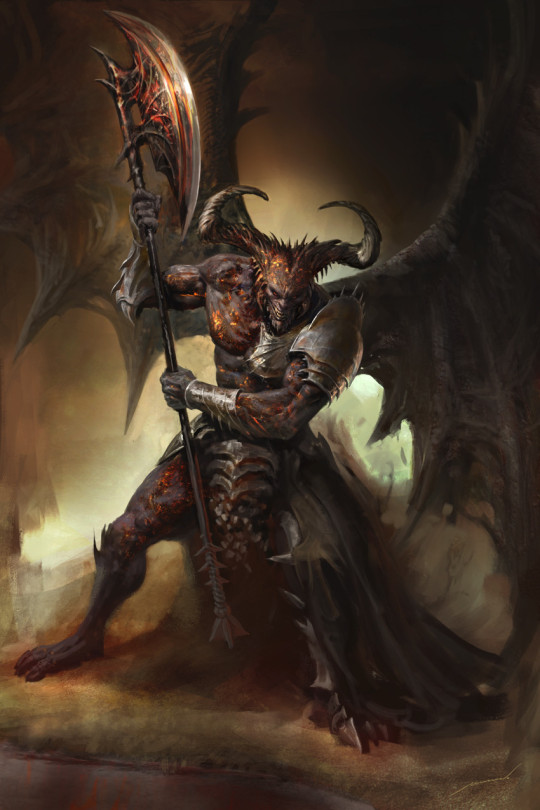 Devils and demons were oftentimes confused with each other during the First and Second Ages. It is now known that "devils" are distinct and separate race from demons, and their origins are from the hostile lands beyond the Inferno Gate. No known expeditions have been made through the Inferno Gate, so what little is known of the land has been gained second-hand. The most credible descriptions depict the Inferno as a land torn asunder in its past by a cataclysmic event. Left behind were islands interspersed with volcanic ranges around a vast, turbulent sea. These islands, rocky and forlorn, hold little support for life. The air is sulfuric smelling of brimstone, and the sun is but a dim red glow in the sky. The inhabitants of this land follow an archaic set of laws and rituals, passed down the generations. Each island is home to a castle, a walled fortress overseen by a dux (duke). The castles are called "holle" in Old Dwarven, meaning "to hide". This has given rise to the nickname "hell" to describe the land. The castles and islands of the Inferno are sparsely populated, and its denizens seek rich, verdant lands and abundance now long lost.

Unlike demons who attack with brute-force chaos, devils tend to use cunning and subterfuge. Always outnumbered, devils rely on alliances with local cultists. Most commonly found in the Realm are tiny devils and imps, usually in the employ of rulers and wizards. Lemure are the shock troops of any attack from the Inferno, usually followed by erinyes, bone and barbed devils. Pit fiends are the most powerful devils seen in the Realm, although rumors hold that other devil species exist - ice and horned devils, for instance. The Infernal dukes have never been reported traveling in the Realm, although several names have been gathered over the Ages: Asmodeus, Dispater, Baalzebub, and Geryon to name a few.