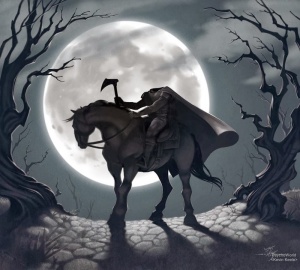 The Headless Horseman of Haggelthorn Hall

Well, there is one port that actually doesn’t want to kill us. Combine the successes at Haggelthorn with the fact that we now have opened the journals to the Wench, our prospects look much brighter. We now know that we must obtain the invisibility pennant, the wings, and the stormstaff to make the Wench whole again and to defeat the magical storm.

After our escape from Dragonsford, we made our way to the end of the peninsula, where we hoped Mr. Dourmoor was hiding. Although Java searched frantically for the vampire and his family, there was no sight of them. Cirark told me that he had left a message with his “contacts”, to take care of the vamps until we could return. With that resolved, we made our heading south, towards the city of Haggelthorn.

As we set sail, we turned our sights to the log books from the previous crew. We knew that the demon was too powerful for us to fight ourselves, and we were left with no choice but to call in a favor. Wrane took to the skies and called for his demoness that he set free back in Portsmith, and she was quick to answer. Once aboard the ship, we explained our predicament, and she told us that she could keep the demon busy, allowing us to unlock the magically sealed logs. We agreed to this, and so she went into battle with the watchdog while we went to work. After a tense bout of puzzle-solving, we were able to recover most of the logs. Missing was the last log book, and the second log book, destroyed in the attempt. These log books revealed to us so much, and we pored over them.

These logs showed to us the unfortunate events of the Wench, from her initial launch, to her losing her crew, her wings, her what we now know is an invisibility pennant, and her essence. We charted the path, and we saw that the best path was indeed through Haggelthorn. It seemed that the pennant was lost at the same time that a shipment of Lord Haggelthorn went missing, and that the lord might have a way of divining his missing chest.

We arrived in Haggelthorn at midnight of the 25th. We were met with a rather shady looking fellow by the name of Neal Goodbread, who was a dock hand and quite confused at our arrival. He told us of where we could rest until morning and we decided to stay at a place called the Druid’s Head Inn, which was mentioned in the logbooks. The Inn was owned by a Brundhall Butterbeer, whose aggravation at such late guests was only matched by our aggravation to his prices. We rented out rooms, and then inquired about a Father Robert, who the logs told us was the original owner of our cursed little mirror. He told us that the father was from a town to the SE called Blisworth, who as per usual was cursed and whose inhabitants hadn’t been heard of in months. Although we were tempted to chase after that lead, the fact that Stormcrow was just behind us made us decline any adventure inland.

The innkeep also told us of a local ghost that was haunting the region between town and Hagglethorn Hall, called the Headless Horseman. This ghost appeared only at sunrise and sunset, and we figured that we could help the town for a small price. We searched for the body of the ghost, guided by Cirark and Chironomous. We found him, Derek Brimbleweed, in an old abandoned cemetery, and we found his head shortly thereafter in an unmarked grave. We buried the head together with his body, and we talked to his spirit, where we learned his family had taken over the hall in the early 800's TA before the Haggelthorns came and reclaimed it. We promised to set him at peace, and we found the object that he had cursed, a key that was a part of Haggelthorn Hall. We blessed the key and buried it in the road that the Horseman frequented, and with this knowledge in place, we made our way to the manor.

At dawn, we approached Haggelthorn Hall, and were greeted by a rather old butler, who was not expecting visitors. When we told him we were the crew of the Wanton Wench, he told us to wait in the study while he retrieved his master. Elias Haggelthorn was shocked to see us, although when we told him our plight, and that we would return his lost chest to him, he told us that he would scrye it. He saw that it was located on Sorrowsong Island, an uncharted island somewhere to the North, and so we had our next destination.

We also asked Elias about his interest in arcane artifacts. He proceeded to show us an entire room devoted to profane items, demonic and arcane in nature. Knowing our clientele, we sold him all of Stormcrow’s possessions, in the hopes that it would get her off our trail. We netted quite the profit, and combined with a reward for cleansing the headless horseman, we decided to do some quick shopping before we headed out. We went to the stores, and grabbed 8 different magic items before heading out to sea.

We set sail around 10am and the day went uneventfully as we went north. We kept that heading until dusk, when a cry from the crow’s nest alerted us to a herd of narwhals out in the distance. The crew believed that to follow them was good luck, and so we changed course to follow them. We realized too late that it was a mistake. The ship was suddenly engulfed in a sea of kelp, and we were left motionless. This kelp was quickly followed by several hags, who attempted to take crew members and drag them down. We fought the hags off, and only lost one crew member in the process. With the hags killed or driven off, the kelp dissipated, and we continued our journey North, towards Sorrowsong Island.

With our sights set on restoring the ship back in plain view, I asked the crew to leave me until my work is complete below decks, as I am far behind on my alchemical studies. Once we get to Sorrowsong, maybe we can finally get this ship on track and restore it to its former glory.