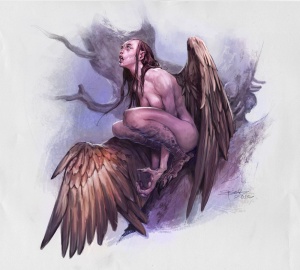 Who knew an invisible ship could cause such confusion! One minute you are the shore party, next minute the ship that you can no longer see is being attacked by an ancient harpy. Luckily, our brave crew is luckier than most, and we are one step closer to fighting the storm.

We had been dragging our loot from the ruined ranger keep to the dinghies in order to leave this cursed island, when we noticed that our ship was missing from view. The away party peered the horizon searching for our Wench, when suddenly the ship was in view, right where we left it. The invisibility pennant had been placed on board by Darksong in order to divide us from the ship, and the spell was only stopped when one of our intrepid “Siege Engineers” decided to fire one of our arbalests at the flock of harpies attacking the Wanton Wench. We made way to the embattled ship, although apparently we weren’t needed, as the harpies began dropping one by one to our expert crew members, and only Darksong remained. She attempted to flee by flying straight at the island, and straight at us. As she approached, she attempted to charm us into drowning ourselves overboard and without any recourse, I downed her for the second time this day with my adhesive spittle. She dropped into the sea, and unable to swim, plummeted down into the depths, only to have her body returned to us with Chironomous’s zombies. A couple of magic items later, and we decided to finish exploring the remains of the castle.

Knowing that there were few rooms left, we made haste to explore the first floor of the keep. First was the guard house, which held a starving orc prisoner. He told us that him and his party had landed here, only to be captured by the harpies, and being used as meals every few days. They had been reduced to five of their number, and the orc pleaded with us to save the lives of his comrades. We entered the dungeon, and freed the rest of the orcs, who were even more frightened of something behind a broken gate. When we examined the gate, a skeletal figure attacked us, and used its intestines as weapons to try and drag us to it. We barely made it out of there, but we did not leave empty handed, as the creature was guarding a lantern made of a skull, which seemed to house the souls of the recently deceased and could release that energy as a weapon.

Other than the dungeon, the rest of the castle was mostly uneventful, and gained us a good amount of coin. The only other area of note was the ranger training room. This room held a strange machine that would attack anything in the room. Luckily, we were able to disable the device without destroying it.

With the castle search completed, we talked to the pirates that we had taken on earlier about rebuilding this place. We figured this island could be a good staging ground for our adventures, and we wanted someone to look after it while we were away. With a little convincing and a lot of coin, they agreed to take care of the place for us, and we made preparations to leave.

This morning, as we were about to set sail, Finn received another message from Haggelthorn. This one was heavily encrypted, and when we finished deciphering, it told us that the previous messages had been intercepted and that Elias had found a key to the next piece of the puzzle. He requested our audience immediately, and so we set sail for Haggelthorn, with hopes that we may make our ship whole again soon.