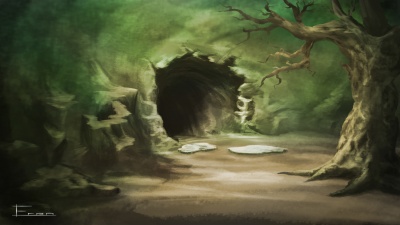 Cave of the Dancing Blades under Crow Hill, Portsmith


The open sea! Fresh air, strange companions, and stranger dealings are the new norm. Still, strangeness in freedom is better than the alternative. It has been a day since we set sail, and we already are facing new dangers and mysterious encounters.

Saturday afternoon we dragged the Wanton Wench to the docks. Said docks were bereft of the other military ships, who had already left before the impending storm. The sight of the Wench being raised brought around quite the crowd, and the shoreline filled with people to see her fixed, and to see the criminals who “might” be on board that have caused so much commotion in their town. The crowd was soon joined by a gaggle of Jana’s thugs. Their leader, some blonde woman with an equally blonde brother, started shouting a warrant for our arrest and demanded to board the ship. Lulu countered, declaring the ship a sanctuary of the Gyre and demanded an injunction by a court magistrate. The blonde goody-two-shoes were flustered by this, and left a small guard group behind while they went off to find someone to validate their claim.

While this was going on, a couple of people managed to get by the crowd and get on board. The first was a small girl, bringing letters to two of our number. One for Java, from the woman she saved in the manor, giving her thanks and offering a gift in thanks. The other was given to Wrane, but addressed to all of us from Lord Winsworth. He was to be hanged for his crimes, and asked that he be buried with his wife afterwards. It was quite touching, and Chironomous almost felt guilty about throwing the wife’s body back to the sea, before figuring that there was a little bit of her all over the ocean, and it wouldn’t be hard to find a final resting place for James. The second person of note was Slip, and with her was a man, whom she introduced as Finnegan Shadowwhisper. He wished to join our ship. Finnegan was a man skilled with the ways of the family, so we agreed.

We asked Slip for information about a number of things and the following is a brief on what she told us:

Considering how much Jana wanted all of us dead, we turned to our newest member Finn to escort Java to the Falconer. Unfortunately, it did not go as planned. There, under the watchful eyes of a giant falcon, Finn decided to make a bargain with the falconer, Willem Buckholder. He had lost one of his prized falcons inside a cave nearby, and that he would help free Java in exchange for us getting the falcon back for him. The man even freed Java from the clip beforehand, and yet the fools didn’t immediately come back to us, instead Java went to the cave to investigate herself, while Finn went to the Inn to find the engineers.

Finn returned a little while later, bringing with him the four “engineers”, which I immediately divined to be the doppleganger brothers, the Willowhispers. Even after confronting them with the truth, they tried to lie about their motives, and agreed to work for free for a month. The priest couldn’t pass up free help, and Chironomous said that the dopplegangers hadn’t had wronged us yet, so they let the four brothers come aboard. Java did not return to us, and after a long while, we decided to go by nightfall to the cave to try and rescue our pet.

When night fell, we got in our row boat, and sailed around the coast towards Crow Hill, where the cave entrance was. The guards on shore gave chase when they spotted us, but we were faster, and were able to get around the cape to the far side and make landfall out of sight. We headed towards the cave entrance, and when we entered, we were met with friends, namely a pair of owlbears. Though a hard fight, we managed to slay the pair of owlbears, but made quite the commotion. Some of our number were scared that the paladins were heading our way and so headed back towards the boat, but Wrane and I headed deeper into the cave complex, hoping to find the lair of the owlbears, which could hold quite the haul of all the poor souls who had ventured into the cave. The complex was deep, and although we only saw a fraction of it, we did find the owlbear lair, which had a preserved owlbear egg, ripe for the picking. We returned to the entrance, removed what pieces of the owlbears we could carry, and left for the boat. Only later, did Juju show us he had found a map of the complex, that showed it lead to a temple with great treasure at the end.

We returned to the ship, only to leave again, to sneak our way to the Dockmaster. Wrane, Java, and Chironomous kept watch outside while Finn, Juju, and I snuck inside the store. Inside was a large collection of nautical gear, a full plate of armor with a halberd that looked enchanted, and behind the counter, a safe. The safe was protected by a magical lock, which I solved with relative ease. Inside was a spyglass, sextant, and astrolabe, and we took them all. Unfortunately, there was also a secondary lock, and when we couldn’t disable it, the clockwork armor started to animate. We left in quite the hurry, and a couple of guards spotted us. Although Finn escaped, Juju, tried to double back through the store, and was cut down by the armor. I dragged him out, and while our crew mates provided a distraction, I safely got him back to the rowboat, and back aboard the Wench.

We set sail in the middle of the night, in order to evade what was going to be even more guards, but we put down anchor by the lighthouse, as our vampiric guest had yet to appear. Lord Dourmoor’s wife told us that he would come soon, and so we used the row boat to get to shore and wait for him. Unfortunately, when he came, he was not alone. He was chased by a dozen werewolves, and although we tried to help him, he was cut down, before getting to us. We fled the scene, and Java spotted a vampire bat, heading towards our ship. With the loss of Dourmoor, we set off North, hoping to follow the path of the Wanton Wench, and hopefully recover the pieces of the ship, to make her whole and appease her spirit.

During the night, we all had a strange dream of the storm, with a mountain, and rivers of lava, and imminent death upon us. We were awoken in the night by an even stranger sight, a second Wrane. At first I thought of our doppleganger crew members, but then my mind flashed to the mirror. That cursed mirror. While the two Wrane’s fought, I went to the mirror in the captain’s quarters, and found it empty. I brought the mirror with me two the fight, and although I pressed it against both of them, neither would go back into the mirror. The crew captured both of them, bound them, and interrogated them. The copy was good, as he is indistinguishable from the original. As dawn broke, and we could make no headway on the two Wranes, we arrived at our destination, a small uncharted island, volcanic.

So we are now with one more orc, one less “good” vampire, and a storm that for some reason seems to be chasing us. I hope that we can get some answers soon, as each new day brings nothing but questions. There is only so long until we are all driven insane by the strange happenings on the open seas.