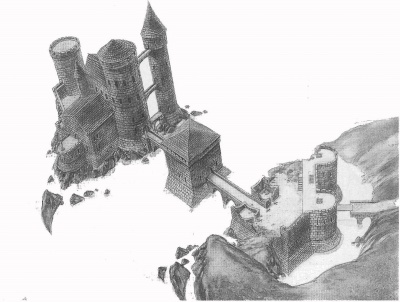 Well, no plan survives contact with the enemy, but so far, we always do: more or less. If the past day has taught me anything, it is that the members of the Wanton Wench are rather difficult to kill. Pirates, check. Telepathic monks, check. Unimaginable ancient horror that deals in non-Euclidian geometry, check?

After we opened the secret chamber in the temple, we made camp inside, as we did not want anyone else to know about the ability to harden masts until we could talk to the abbot and strike a deal. Chironomous went to the dining hall, where he was informed about the special properties of the blue flowers located on the island. They kept anyone who consumed them from dreaming, and the monks had made several recipes based on the flower. They had once been consumed by nightmares brought forth by the monster and only the flowers kept it at bay. We all agreed that nightmares that could drive a man insane were best left alone and so we imbibed of the monk’s special ale, and we rested for the night, closing up the secret chamber in the temple, lest anyone else discover the secret.

The night did not pass uneventfully, as multiple parties attempted to gain entrance to the temple. The first was one of the monks, making rounds, and we were able to “convince” them that we preferred the cold floor of the temple to that of the beds. After the monk left, we barred the doors with Zane (Zombie Wrane) and were more vigilant in keeping a lookout. The second group who tried to gain entry was the crew of the Cruel Doubloon. They tried the doors, and finding them barred, left in quite a hurry. After that, the night passed without dreams, and we awoke the next morning to strike a bargain.

The abbot though, was not the only new arrival to the monastery that day, as Captain Rooking had made his way up the island. All three parties (The abbot and the monks, Captain Rooking and crew, and ourselves) joined in the temple. Brother Kiril, the abbot, surmised that we had discovered the secret of the temple, and asked us to enlighten him and the monks. We countered with a trade deal. We would give up the secrets of the temple, giving them the ability to hold back the darkness, in exchange for our own mast. We also offered to find more telepaths to help with the protection of the Netted Gate in exchange for their excess barrels of beer, who Juju thought would fetch an excellent price, and the rest of us concurred. Though extremely reluctant, the abbot eventually consented to this deal, and he and his monks left to make preparations.

Once the monks left, Rooking revealed that he had plans of his own. He told us that he wanted us to join in a double-cross. That during the exchange for our mast, his crew would grab theirs, and we would both escape in the confusion. Despite our attempts to warn him about the power of the monks, and the danger behind the gate, he could not be dissuaded. We sent Java to warn the Wanton Wench about a possible attack by the Cruel Doubloon, and to have the ship move around to the other side of the island, where the gate was located.

The abbot returned, with four of his brethren, and after politely asking everyone but myself to leave the room, I showed him how to use the fount to gain access to the hidden chamber. Relieved, the abbot had the monks pull out the existing mast, hardened by the black ichor, and we made our way to the gate. As the throng of people marched to the gate’s entrance, we overheard Captain Rooking talk to the members of his ship using his magical ring, that the Cruel Doubloon was to follow the Wanton Wench and to prepare to attack.

When we arrived at the gate, the rest of the monks were already in position. We took places on either side of the gate, next to members of Rooking’s crew, and waited for the ritual to start. The monks all started chanting in unison, and the mast of the Wanton Wench started to move out of place, as the new mast was inserted. The creature, seemingly aware of the weakened state of the gate, redoubled its efforts to break free. Rooking decided that this was their time, and he and his crew made their way to the gate and attempted to move their own mast out of the way. We attempted to stop them, but the weakened gate could not hold. The gate was blown open, the monks were swept aside, and the last thing I remember before passing out was a throng of teeth, or beaks, or tentacles.

When I awoke, I saw the damage that had been done. The crew of the Cruel Doubloon were dead, except for two members, who after seeing a horror of ancient times, wished to join our ranks. Captain Rooking lay dead, and Chironomous looked at his body with just the smallest amount of glee. Chironomous and Finn were stranded on the wrong side of the gate, with an open chasm between us and them, and it took some amount of work to ensure that they did not fall to their doom. Brother Kiril looked at us in disgust, floating above the carnage, having escaped the worst of the attack. He closed the gate, shook his head, and retreated to his tower. The most important thing though was the mast. Our mast, reinforced with its strange magic, had survived the ordeal, and was undamaged.

With the monks now gone, we took this as a perfect time to take a few items from the monastery. We immediately started looting for anything of value, starting with the flower-enhanced beer, and the net launcher. Using the ring of Rooking, we used Java’s imitation skills to convince the Cruel Doubloon to stop chasing the Wanton Wench and to leave one of the ballistae from the ship on the shore line. Juju, whose name I may remember someday, took this time to sneak over to the abbot’s tower. He must have had some interesting conversation with the abbot, as suddenly, the items, we were taking, as well as our mast and the ballistae started floating to our ship. We returned to the Wanton Wench to confused faces, and simply told them that it was time to leave. They didn’t object to this idea, and with the mast back in place, we made good speed north, towards the next spot on the log book, Broken Teeth.

The Cruel Doubloon gave chase, and though we briefly thought about overtaking it, it was too heavily armed to attempt a boarding action. Luckily we had a mast and they didn’t, so we made left the Cruel Doubloon in our wake, and raced them to Broken Teeth, figuring we had several hours until they could catch up.

We arrived at Broken Teeth and came to the conclusion that this was a fortress. Built onto a tiny rock, the castle was a nightmare to gain entry. We could either go by land, over exposed bridges with dozens of guards, or attempt to go through the Traitor’s Gate dock, only big enough for one ship, and in the bowels of the fortress. And yet we must gain entry, as not only the previous log books, but the head of the Wanton Wench herself, and the magical ballistae for the ship were supposedly inside. We settled on assaulting the dock, using water walk to sneak in, and hope to overpower what few guards lay inside the castle proper.

Waiting until nightfall, we snuck into port, overpowering the two guards there with a minimum of noise. In the port was a large statue, which supposedly could detect lies, and which the pirates would use to determine the fate of traitors, hence the name of the place. There was also a single staircase path that led up. We followed this path for miles, as it went a long way down before resuming the climb up. On either side of the path were large sealed vases, which we assumed were burial remains of past pirates of importance. We only stopped once, at a large statue of a demon, which turned out to be a ruse for a blade trap on the other side. Finn disabled this quickly, and we kept going up until we arrived in a tomb of the first Sea Baron. Although his sarcophagi lay empty, the sarcophagi of his wife was not, and after checking that the extremely large necklace she wore was not protected by magic, we grabbed that and continued forth.

The path from the tomb continued up and led to an old storage room behind a secret door. In the room was a guard, and beyond the room we could hear the voices of ogres. We removed the guard quietly and removed his identification papers and a campaign medal from the Sea Barons. The storage room itself did not hold much value, and we continued to look in the hallway.

Down the hall, in an opening, there were five ogres huddled around a fire eating what only they could describe as dinner. Opposite their area, was a wine cellar, filled with the finest wines the barons had acquired over the years. We used the lack of intelligence of ogres, to trick them into thinking that Finn was the now “former” guard, and used some darkness to ferry the rest of us into the wine cellar. In there, there was a trap door up, and although Finn told us he disabled the alarm attached to it, when we attempted to go up, an alarm sounded. Quickly moving we found ourselves in a pantry. The door to the pantry opened and the cook stood in shock. We quickly subdued her, and then took a couple of minutes finding her assistants, subduing them, tying them up, gagging them, and locking them inside their chambers.

And that is where we stand. The castle must be on alert by now, and we are in the kitchen, about to assault what we believe to be the great hall. Stealth may no longer be an option. But if we can survive an ageless terror, we can surely survive a castle filled with people who want to kill us, and a sorceress that can turn us to a pillar of salt, right?