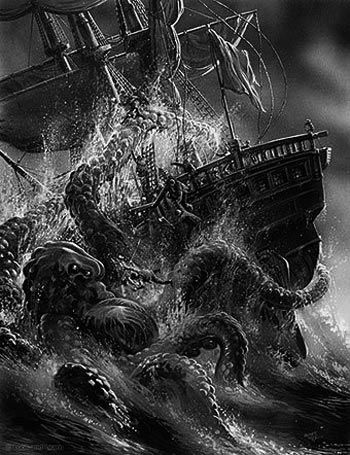 Well, that was exciting! Not everyone can survive assaulting and stealing from one of the most powerful armadas in the known world, but we are the Wanton Wench. The Sea Barons are a powerful enemy, but a rich enemy, and it is so much more fun taking from the rich. I hope the naïve letters placed by Juju, (who now wants to be known as Cirark or some such), can alleviate the pain of Roland Carver, Fifth Baron Mastway’s lighter pockets.

When we entered the great hall last night, we found the place empty, and immediately thrust Finn into the room to search for traps. There were three items of interest in the hall, and we managed to trigger the trap for each. The first was the throne of the Sea Barons, which held a secret compartment. Inside the compartment was a magical pair of spectacles, which when worn and the command phrase uttered, were able to see secret doors and detect magical traps and items. The second thing of note was an ornate sword on the mantle, and when we picked it up, it sprang to life and attacked us. A little alchemical spittle and a lot of brute force and it was ours, albeit in slightly less than mint condition. The final item was a great grandfather clock, that when opened revealed a small gremlin like creature inside. The creature ran away upstairs, and we were unable to catch it.

Shortly after the creature ran upstairs, we heard movement from above and then a woman’s voice, and a terrible burst of flame. I do not remember much of the battle that followed, something about a woman with such beauty and power has such a hold on me. I do remember that we forced the sorceress and the baron himself back into their chambers, where they escaped from us using a teleporting door in the back of their wardrobe. We had lost one of our own, the brave zombie Zooking was felled in the blast, and would have to be remade. With the castle on high alert now, we picked ourselves together and went higher into the castle, desperately searching for the missing pieces of the Wanton Wench.

Upstairs, we found the Baron’s bedroom, and the library of the Sea Barons, with a secret passage that connected the two. In the library we discovered behind one of the paintings, a hidden compartment that held both the original treaty of the Sea Barons, and the missing chapters of the log book! We immediately took both, and went into the secret passage, which contained a staircase further up, protected by a group of shades. We took them out quickly, with only a couple of us physically drained by the beasts and endeavored up.

A quick scan by Java showed that the most likely place that the masthead of the Wanton Wench would probably be inside what looked to be an artist studio. We went in there, and using the magical glasses, found there was a hidden room in the room. Inside, we found great amounts of treasure, the knowledge of the Sea Barons, and the masthead. The amount of goods we found was staggering, and we knew we would need a couple more hands to carry it, so we decided to go free whatever prisoners the Sea Barons had on the island. A quick search through their dungeons recovered three men from the original Wanton Wench crew, including both the first and second mates. We believed that these men could help us discover whatever other secrets the Wench held, and so we made sure their wounds were dealt with before we left.

With the prisoners and treasure in tow, we had Java go to the ship, and bring her back to us, so we could escape. We went out onto the rocky cliffs of the island and hid there from the patrols of the Barons, who were bringing in reinforcements from the mainland. We used the Oppenheimer to quietly slip away, and were gone before any of the Barons’ men spotted us.

With the mast-head returned to the Wench, the ghost of the ship showed itself to us. It was grateful to us and gave us one wish to answer any question. We asked about the storm, and why it was determined to chase us. We were told it originated in Wolfshaunt, a land of monsters, and was brought forth by the master of storms. It was draining energy from the world and was chasing us because the Wench, was a magical “flying” vessel, capable of stopping it. We discovered that in order to stop the storm, we must find the missing wings of the ship and find a magical staff called the Whitlock Stormstaff. With this knowledge in hand, we set off west for Dragonsford, in the hope of resupplying and finding information.

P.S. Mr. Dourmoor was brought back using the magical mirror, but that is a mystery for a new day.