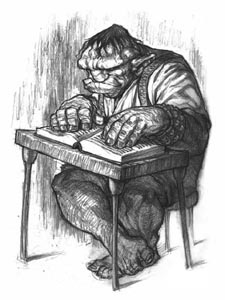 Well, another day, another port that has politely asked us to get the hell out. The town of Dragonsford has given us lovely memories of tense chases, zealous paladins, and a staff of unimaginable power, but we have overstayed our welcome. Hopefully the staff is worth burning even more contacts.

Yesterday, while waiting for Morgan’s meeting, we made a few discoveries. Java, while on patrol through the city, found that the Captain’s Doom was accompanied by two giants. One stayed at the ship while the other had set up shop outside of the castle. We also noticed that the crows that had come with the ship would now follow us wherever we went, acting as spies for Stormcrow. I returned to the small alchemist’s hut, and bought their old formulae books, and was told they could get another one in exchange for rare plants they could grow in their garden. The last thing was that Chironomous went on a scouting mission to find suitable new “recruits”, to join his throng of zombies.

When the time came, Morgan went down to the docks personally to bring us to the castle. He was accompanied by his pet Ogre Ruhks, who Java took an immediate interest in, and they talked constantly our walk to the castle. Inside the gates, we were taken to the wizard’s tower, on the outskirts of the area.

I have to say that the conversation with Morgan was not nearly fruitful as I would have hoped. Morgan only took a passing interest in the magical storm and seemed even less interested in our squabble with the Sea Barons. He took us inside his lab, where among a veritable horde of arcane artifacts was the Stormstaff. It and the other items were magically warded, and he told us that he would eventually get around to studying it. We told him about our ship and its special properties, and he told us that he wished to meet at noon today.

During this time, Ruhks had told Java that he had been studying caverns that spanned underneath the city, and that had ruins of the ancient Bluestone Dwarves. He wished to show us his excavation, and seeing his map, which showed that the caverns led directly beneath the wizard’s tower, we agreed to meet him at one of the entrances to the caverns after our lunch with Morgan.

After our meeting, we headed back to the ship to discuss our options, but Ciram was noticeably absent for a while. When he did make his way back, Cirark told us that he had met with an old friend of his: a gypsy who was a part of a travelling circus or some such. He told us that he was quite keen on being here for the festival they were preparing although he was cagey when pressed for answers.

While we were discussing our next move, we heard screams and shouts from the village. We learned that the stowaway vampire had taken another life, and it wasn’t long until we saw his gaseous form head towards our ship. He flew past us, and although we tried to light him up for passersby, the town watch, led by a man with magic spectacles, believed he was on our ship. Java set off after the vampire to find its lair.

Randall soon arrived with a throng of men and stormed the ship. He didn’t care that he had no jurisdiction there, he moved to have me arrested and had more men sent below decks to find the vampire and any others with “tainted” blood. The guards attacked me, and I did not raise a hand to them, although their deaths would have been no great loss. It was Finn who broke the stalemate, as he charmed the watchmen with the fancy spectacles to push Randall overboard. Without their leader, the rest of the guards were hesitant to attack, and retreated off the boat and went to shore to find their beloved bigot. Wrane and I took a more direct approach and dove into the water to make sure that the captain would be “lost at sea”.

We found Randall struggling to get to shore, and with a combination of brute force and magic, were able to pin him under, holding him until he struggled no more. When the deed was done, Chironomous’s zombies dragged the body away under the waters. We returned to the ship, knowing that Wrane’s parents had been avenged, and waited for the inevitable visit from Morgan. He quickly came and told us that there would be an investigation, and that we would be interrogated in the morning.

Java returned, and told us that the vampire was in league with multiple other shadowy figures, and wished to kill Mr. Dourmoor, and frame him for the Dragonsford murders. We told the Dourmoors and Mr. Dourmoor told us that it must be a vampire by the name of Mr. Sly, who ran the bank in the Wolfshaunt, and whom Mr. Dourmoor used to work for. We told our guests that ship was not safe, and told them to flee, and wait until the coast was clear to return. They agreed and went into hiding.

The next morning, the interrogations started and ended with me. After a fair bit torture and by some magical means, Morgan was able to divine the true fate of Randall. He did not seem enraged though that had killed the man and shared his distaste for the late captain. He did tell us though that the man was related to royalty and that the power to adjudicate the crime was beyond his control. He gave us two options. The first was to surrender ourselves to the city and wait for the king to return to make judgement. The other choice was to flee by midnight and he assured us a head start over the Captain’s Doom and the Sea Barons who wished us dead. I was not keen on becoming prisoner yet again, so I agreed that the Wanton Wench would leave.

The ship had still not been fully repaired, and so I set to work to quicken the process, only pausing to have one of the girls go to exchange some of the seeds of our blue flower for the third formulae book. The others decided that we could not leave without the Stormstaff, and endeavored to use the caverns to infiltrate the wizard’s tower. With Java distracting Ruhks, the others made their way underneath the tower, climbed to an old, discarded entrance, and made their way to the lab full of artifacts. I’m not sure of the specifics, but by the alarms that rang throughout the city and the fact that the party returned with the staff, I would say it was about par for the course.

With the staff in hand, and the ship repaired, we set off, away from another city that wants nothing to do with us. With the staff, we are a step closer to being able to challenge the storm. With the ship repaired, we received another visit from our friend ghost. We asked her how to uncover the logs, and she told us that the best way to deal with a demon is with another demon, namely using the favor Wrane had sustained all the way back in Portsmith. With this knowledge, we can find the next destination of our journey, hopefully somewhere that won’t hate us after our visit.