The Hastur Rebellions ended in the Summer of 885 TA with the successful siege of Teufeldorf by the Army of the Reaches under the command of Dugald Axeworthy. The remnants of the Undead Hordes, their leader Grim now turned to dust, were seen heading south along the Greater Farthing Road towards the Sands of Time. At their head was the Liche Priest Nightshade, the new commander of the Army of the Tomb Kingdom.

With the yoke of Hastur lifted, the leaders of the six kingdoms considered their options. For the first time in almost fifty years, the fear of the Stone God's retribution was gone. In the dark nights of the Winter of 885-886 TA, plans were formed.

Using their oft-intercepted coded messages, the forces of evil planned two offensives. The first, called the Feint on Dragonsford, was meant to draw the attention of the Three Kings away from the South. The orcish general Truk was to raise a small force east of the Shadowyarn Mountains. Four fists of goblins from Dreadwood, two fists of orc warriors from the Pass of Lar, two fists of black orcs from the Ashen Forest, and two tribes of giants from the Demon's Pocket were to converge at the River White just north of Dragonsford. There, they were to sweep down into the Eastern Reaches, hopefully pulling knights and dwarves from the West.

The second offensive, the Attack on Freeport, under the command of Nightshade and two liche priests were to muster four companies of skeleton warriors, four companies of skeleton bowmen, and a terrifying band of bone giants. These were to join four units of heavy Sandal cavalry moving from the South. The meeting place was Crossgate Castle, although the ultimate objective was the bustling port city of Freeport. Sacking the city would throw the Southern Reaches into chaos.

Several weeks ago, Dwarven watchers intercepted a small orcish warband in the northern mountains. The orcs fought recklessly to their death, and a magicked scroll case was intercepted. It was surmised that the tube contains the master warplans of the forces of evil in the Reaches. The outside of the scroll was ensorcelled with the following verse.

Housed in a crumbling temple, unseen by the eye,
Eternal and breathless, never to die,
It's said that I'm lost if your life's goal is greed,
Treasure's you've stored up that I'll never need.


Inside, the vellum scroll had the following message scrawled on it: 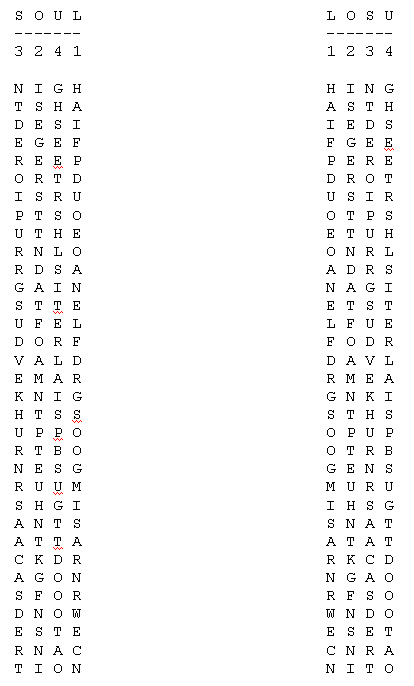 Armed with this advanced intelligence, the Three Kings planned their offensive. The dwarves mobilized first, early in March 886 TA.

The first battle of the season took place in April. Just south of the Wilds on the windswept northwestern Plains of the Beast, two fists of orcs from the Pass of Lar were ambushed by a vastly superior force of dwarven warriors and quickly dispatched.

As the warming sun of May reached into the frigid north, it was clear that a major dwarven offensive, now called Dwarven Thunder, was underway. In the West, the newly-crowned Ranger King Fleetwood mobilized his infantry, sending fully sixteen companies of archers, men-at-arms and peasants to aid the Southern Reaches. Later that month, the dwarves were able to quickly siege the Pass of Lar. Unprepared for the dwarven offensive, the orcish leaders were quickly routed and fled down the pass to the west.

Sweeping down the Pass of Lar, the Dwarven Army of Dugald Axeworthy moved quickly west sacking the orcish hold at Broken Wood. While warned of the impending arrival of the dwarves, the orcish commander at Broken Wood was unable to muster enough local militia to hold his castle.

It was the heat of the Summer and the stench of the Dourmoor was overwhelming. Yet Dugald Axeworthy set up a siege of the orcish capital. With both roads through the swamp under control, the orcs were unable to bring in support for their city. It is rumored that Gruumsh disappeared into the swamp during the dark of the moon on the midsummer solstice. While far away to the south in the clear atmosphere of the Whispering Hills, the giant eagles came to the aid of the Elven Lords.

It was during these long, hot days, that the combined forces from the Tomb Kingdom and Sandal combined to march along the northern border of the Endless Forest, following the road to the coast with their final objective to overtake the city of Freeport. East of the forbidding walls of Crossgate Castle, the Army of the Reaches traveling from the north met the forces of evil. It was a bloody exchange with massive casualties on both sides. In the end, the defenders were victorious. The ragtag remnants of the forces of evil fled homeward.

As Summer came to a close and the dog days of August were waning, the Orcish forces of General Truk, unaware of the plight of their capital city, began a sack of the keep at the Eastern Reaches town of Middlefield. It was at the end of that month that two great battles took place. First, the orcish capital fell to the siege. It was looted, burned and its garrison was put to the axe by Dugald and his men. Meanwhile, the Knights of the West made a surprise attack into Sandal, beginning a siege of Whitehall Castle.

September found success in both the north and south for the Armies of the Reaches. By mid-month, the castle at Whitehall was taken. In addition, the dwarven army, returning from its victorious rout of the orcs, sacked the orcish stronghold at Stonefist. Only an emergency mustering of Undead carrion and Sandal marauders kept the South from suffering additional damage.

As the campaign season wound to a close, early snows were beginning to fall in the north. The dwarves sacked the orcish village of Tanglewood, further impoverishing the already beleaguered north. The orcs successfully completed their siege of Middlefield, although their pillage was short-lived as the arrival of a host of elves brought the battle to the field. The successful Dwarven Thunder campaign of 886 TA ended with the elves, under the leadership of Baron William of Markinghamshire, his home guard far to the south in Sandal. The elves, aided by their ancient pact with the Giant Eagles, routed the exhausted orcs in the Battle of Middlefield. What survivors there were fled north as the snows began to fall in earnest.