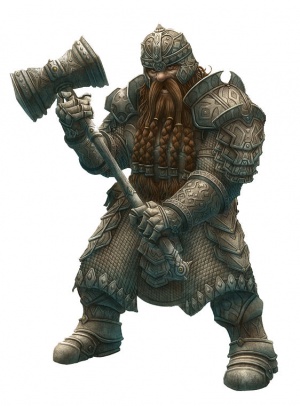 Dwarves and elves are the elder races in the Realm with origins lost in the myths of the early days of the First Age.

Dwarves are a short and stocky race, and stand about a foot shorter than most humans, with wide, compact bodies that account for their burly appearance. Male and female dwarves pride themselves on the length of their hair, and men often decorate their beards with a variety of clasps and intricate braids. Dwarves typically have two or three offspring during their long lives. Dwarves are driven by honor and tradition, and while they are often satirized as standoffish, they have a strong sense of friendship and justice, and those who win their trust understand that, while they work hard, they play even harder—especially when good ale is involved. Dwarves often leave the confines of their redoubts to seek glory for their clans or to find wealth with which to enrich the fortress-homes of their birth.

Dwarves are a stoic but stern race, ensconced in cities carved from the hearts of mountains and fiercely determined to repel the depredations of savage races like orcs and goblins. More than any other race, the dwarves have acquired a reputation as dour and humorless craftsmen of the earth. It could be said that dwarven history shapes the dark disposition of many dwarves, for they reside in high mountains and dangerous realms below the earth, constantly at war with giants, goblins, and other such horrors. A long line of descendants can trace their roots back to the four sons, and the Dwarven Kings uphold the proud traditions of craftsmenship in gold, gems, stone and metal. During the Second and Third Ages, the four dwarven Houses lost touch with their brethern. The dwarves today remain isolated, by their own choice, from the affairs of men and elves. Although dwarves can be found throughout the Realm, they are still numerous only in their mountain sanctuaries and deep within their mines.

Adventuring dwarves may be found in any profession - even clerics to human deities. That said, all dwarves honor their fallen heroes who await the living in the halls of Hammerheim.

The dwarven race has existed since the early days of the First Age. It is said that Moradin created the race of dwarves from iron and mithral, forging them in the fires at the center of the world. The dwarves souls entered their bodies when Moradin blew on his creations to cool them. Moradin then sent the dwarves into the Realm to build the mountains and valleys long before the other races set foot upon the land. For how can one have a forest without the earth underneath being first formed and shaped? Later, their work done, the dwarves retreated into the great mountains to build halls of stone, mine the rich gold and gems of the earth, and feast to celebrate their accomplishments. Only then did the elves arrive to spread life in the form of trees and grasses on the dwarven work.

Scholars believe the dwarven race began deep in the Frostbrand Mountains. Carved stones from the First Age bear testimony to the earliest days of the race. The stones tell that Moradin had four sons, each of which would one day lead a great House of the dwarves.

The eldest was Thorin who founded the vast underground Hurlstone and the empire of Thorinshold deep in the Frostbrand Mountains. Hurlstone is the most ancient and revered city in all dwarfdom, and many dwarves during the Second and Third Ages pilgrimage to Hurlstone to marvel at its construction and to read the ancient stones. Thorin, also known as the Goldsmith, founded the great house of dwarves who mine for gold, silver and other precious metals. With these resources, the Dwarves of the Frostbrand Mountains have established a great trading empire and have become skilled at wroughting items of magical power and great beauty from the metals they mine.

It was during the middle of the First Age that the first migration of dwarves (now known as the Jeweled Migration) from the Frostbrand Mountains occurred. Moradin's second son, Durin, led a party of explorers across the Great Sea to the Shadowyarn Mountains. There, he sought rare and precious gems deep in the mines below those ancient peaks. Durin, also known as the Gemsmith, discovered great wealth in the caves and warrens beneath the mountains: rubies, emeralds, sapphires, and diamonds were mined, and gemsmiths of the Shadowyarn Mountains became legendary for their skills. Durin established a stronghold at Dwarrowdelf, along the natural pass through the mountains. There, he traded with merchants who sold the stones throughout the Realm.

In the centuries that followed, the House of Thorin and the House of Durin both flourished. While isolated by thousands of miles, contact between the sons was friendly and frequent. In the late First Age, Moradin's third son, Balin, announced his intention to also form a migration (later to be called the Stone Path). This migration led the dwarves west along the frigid northern coast of Perem Major to the vast stretch of the Houndstooth Mountains. Balin, the Stonecarver, did not find great veins of ore nor were the gemstones particularly numerous. What drew Balin to this isolated corner of the Realm were the great deposits of marble, alabaster, and granite. Every color stone could be found in the Houndstooth Mountains, and the great arches of Balin's stronghold are considered among the great wonders of the world. The House of Balin trades today with the Reaches across the Inner Sea and along land routes to the Elves and the men of the Wilderlands.

As the First Age was drawing to a close, the last of Moradin's sons undertook his migration. But, where his brothers had founded noble houses and proud lineages, Calin the Blacksmith rose up in rebellion at his father and brothers. His dark and brooding nature attracted those dwarves disenchanted with their fate in life. As a youth, Calin was known for his excesses in drink and gambling. While he was an expert blacksmith, working miraculous creations in mithril and steel, his dark ways led him to create powerful weapons of destruction. When at last he left Thorinshold, his following of dark brothers were gladly departed. Settling in the Dragonstooth Mountains near the Hellfurnaces, the House of the Blacksmith remains isolated from the other dwarven nations. The work of Calin's people, however, is still highly sought after in the Western Empire and the Realm.