Expedition into the Old Temple of Ice 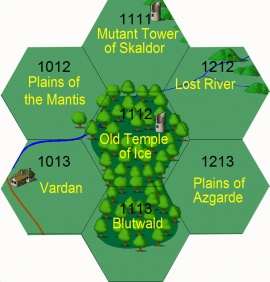 Legend: Curse of the Ice Temple

Located in the Blutwald in the Barony of Huntingdon, the Old Temple of Ice has long been a source of rumor in Teufeldorf. While the tales vary, a poem describing the temple and its treasure, has long been a favorite of bards in the pubs and inns of the Teufeldorf.

Curse of the Ice Temple

Far over the misty mountains cold,
To dungeons deep and caverns old,
Ice creatures here were called and told,
To seek the pale enchanted gold.

For ancient king and elvish lord,
To here they brought their fighting horde,
And tried to take this with the sword,
But all did hear the cursed ice ward.

The mountain froze beneath the moon,
The kings, they heard the trap of doom,
They fled these halls with fatal gloom,
The cursed ice ward has sung its tune.

Far over the misty mountains grim,
To dungeons deep and caverns dim,
The ice curse takes both life and limb,
Beware all gods and mortal men. 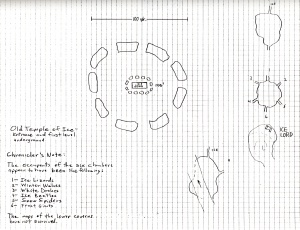 While staying at Teufeldorf Manor, The Party explored much of the surrounding countryside. One of their expeditions took them to the cold forest, Blutwald. There, they discovered the remains of the Old Temple of Ice and the caverns beneath it.

The temple itself consisted of an outer circle of huge stone monoliths and an inner circle of smaller stones. Within the smaller circle was a pit down. They descended into an ice cavern with six passages radiating outwards. Most were occupied, and the party had to kill many ice creatures, including ice lizards, white drakes, ice beetles, winter wolves, snow spiders, and frost giants.

One of the six caverns led to the lower portions of the Ice Temple. The first chamber entered contained thirteen coffins and a throne. Upon the throne was seated a skeletal figure clutching a staff. The party claimed the staff, but they roused the mummies from their coffins, and a battle ensued. The party was victorious, and an inspection of the staff indicated that it could detect traps. "Let this staff on Rabbin's lap see me through this dreadful trap," was the phrase that triggered its function. The mention of traps brought to mind the curse that lay upon the temple. Perhaps this staff could led them through traps of the Ice Ward.

The party continued to explore the temple, and they slew many creatures of ice. Mighty snow lions fell below their swords, as did a snow serpent cunningly disguised as a tree. The caverns were inhabited by the natives of Kos, and the party was forced to slay almost all of the warriors in the tribe. The real tests, however, were the traps. The three traps of the Ice Ward had a theme, "See no evil, Hear no evil, Speak no evil." The Party survived all, but not without difficulty. The first trap was a medusa. The sight of the gruesome snake woman had to be avoided. The second involved the wail of a banshee maiden. The terrible sound was a great threat to all. The final trap, which required that the party make no sound, proved quite dangerous, but quite rewarding. Noise would have aroused the deadly Snakes of the Ringlets which lived in a hanging curtain of chainmail. The Party survived and Ickin Namffoh claimed a rune sword, Cometstail.