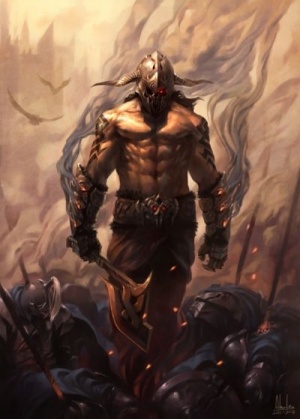 In the middle of the seventh century of the Second Age, shamanism was in its crudest beginnings in the Orc Nation. The origin of this practice within the orcish culture is unclear, although the first recorded use of magic coincided with the expansion of the Orc Nation over the Shadowyarn Mountains and into the Eastern Reaches. Some have speculated that the orcs found a magical device left over from some ancient race. Other scholars believe that the subjugation of the Shadowyarn goblins introduced magical practices into orcish society. Some historians have also argued that the orcs had nothing to do with arrival of the demons.

While the cause is still debated, it is known that in 663 SA, a portal was created between the Realm and some other world. This passageway allowed thirteen armies of demons to be loosed upon the Reaches near the northern end of the Shadowyarn Mountains. These armies were devastating in their ruthless passion for violence and bloodshed. Each army was led by a giant raver, a massive creature of immense destructive capabilities. Each giant raver was accompanied by a lore master, a misshapen creature, weak in physical strength, but unbelievably strong in magical abilities. Lore masters wielded iron staves of great power, doing the bidding of their giant raver masters. The armies each numbered six hundred sixty-six minions including barrow wights and cave wights.

As the demons poured westward out of the Shadowyarn Mountains from the Pass of Lar, both orcs and humans were driven back by their relentless aggression. The war went poorly for the Reaches, with all organized battles being won by the demons. Finally, a temporary pact between the Orc Nation and the Reaches was made. Unable to face their aggressors in traditional combat, a guerrilla-style war was waged. Still, the demons pressed forward towards Teufeldorf.

In 665 SA, a ship from the Old Kingdom arrived with a wizard from the Collegium Magicium named Benedict. With Benedict came a battery of battle mages. With one battle mage assigned to each fighting unit, the humans were able to slow down the advance of the demon forces. In early 666 SA, Benedict set off westward towards Mount Thunder, an active volcano which shook the ground with frequent eruptions and tremors. Benedict took with him a number of relics brought from the Old Kingdom including thirteen magical golden boxes and a gnarled wooden staff.

The events that followed are conjecture at best. In was late in October 666 SA, when the Armies of the Reaches reported that the demons suddenly began fleeing towards Mount Thunder. Battles were stopped in progress, hard-won fortifications were abandoned, and prisoners were left unguarded. Whether the demons moved of their own accord or were drawn to the mountain is not known. The only known witness was the druid acolyte Todd Treelover who later told of countless hordes of evil creatures going into the smoking lava tubes of Mount Thunder.

It is known that Benedict, now known as the Demonbinder, magically trapped the thirteen armies into thirteen covenants using the Staff of Justice. His story will never fully be known for Todd collapsed the mountain with a series of earthquake spells, killing Benedict and sealing him in a flaming grave. Over the next several weeks, the remaining thirteen battle mages gathered outside of Mount Thunder, now known as Mount Todd. Once assembled, they magically explored the ruins of the lava tubes eventually finding the thirteen magical golden boxes. Each mage took one covenant to hide in the most inaccessible corner of the Realm. These mages were never seen again, and many believe that they ritually destroyed themselves to protect the secrets of their covenant's location. The remains of Benedict Demonbinder and his magical staff were never found. Although tales have surfaced over the centuries of a man in tattered clothes carrying a gnarled wooden staff wandering through the Sands of Time, south of Mount Todd, mumbling about demons and magical spells.

So, in 666 SA the demons were bound and the First Demon War came to an end. Within a few months, the pact between the orcs and humans was broken. Within a few years, the tales of the heroics of the First Demon War were stories told to frighten children. In the years between the two Demon Wars, a handful of barrow wights and cave wights were encountered. It is assumed that these were either hidden underground shielded by stone, too far away from Benedict to respond, or in some way unable to join their brethren. In any case, time had not aged these creatures or taken away their thoroughly nasty disposition.