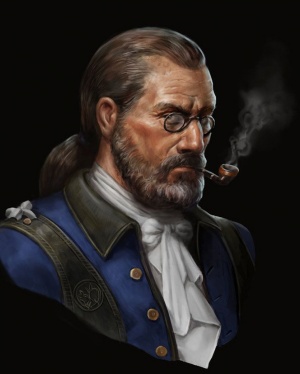 Martin Wickham, the Seventh Baron of Wickham, was a bull-necked fighter focused on defending his barony with the sword and bow. Martin was an authoritarian given to gestures of grandeur and ultimatums. In his wake, his son Geoffrey followed Martin around the barony restoring the peace by skillful negotiation and a well-placed bribe. When his father died suddenly in 890 TA of unknown causes, Geoffrey continued his diplomatic approach to managing Wickham.

Geoffrey Wickham, the Eighth Baron of Wickham, is now a middle-aged man with long graying hair, short cropped beard and a thoughtful countenance. More than any other Western Reaches noble, he has established excellent relationships with Wickham's bordering neighbors including the hobbits of the Elderberry Downs, the elves of Welkwood, and the eagles of the Whispering Hills. It is rumored that Wickham has even negotiated lumber rights to the Endless Forest with the Druids. It was upon Wickham's insistence that the gnome homeland in the Eidolon Moors was formalized - carving a new kingdom from the barony.

Wickham established a school at Wickham Hall in Teufeldorf for the children of the lands surrounding the barony - including hobbit, elven and gnomish children. Human children also attend, and the focus of the school is learning cultural differences so that the region can remain united. He has even invited children from Freeport, political rivals, to attend. Six children from Freeport attend, chaperoned by Juliette Young, the eldest daughter of the current Governor of Freeport. It is rumored that Geoffrey Wickham and Juliette Young are engaged, despite an age difference of thirty years. If true, the marriage would significantly advance Wickham's agenda in Freeport.

Geoffrey is a powerful merchant who splits his time between Wickham Hall and Freeport. His connections in the city are extensive, and he conducts business in the coffee houses of the city. Geoffrey is almost always smoking a pipe filled with fine hobbit tobacco.