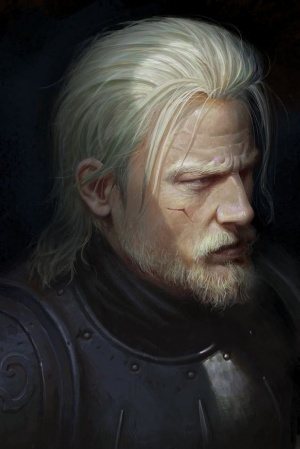 Greyson Rockingham, Sixteenth Baron of Rockingham, is a rugged man in his mid-thirties with a pale complexion and blond hair. He is described as serious and intense with a single-minded focus on protecting his tenants and fiefs. Greyson succeeded his grandfather, Arthur Rockingham, as the Baron in 903 TA at age fourteen. His father, Maxwell, died the previous year in a carriage accident that also claimed Greyson's mother.

Greyson was born into the opulent luxury of Wyrmslayer Estate, the family home in Teufeldorf gifted to the Rockinghams by King Hubert Wyrmslayer in the late 7th century TA. As a youth and contrary to his parent's and grandparent's desires, Greyson preferred hanging around the Military District learning the art of war to a more traditional education in the finer arts of the court.

Upon assuming the Barony, Greyson finished his education under a series of tutors while traveling extensively around his lands - an activity rarely undertaken by his father and grandfather. He quickly gained favor with the tenants of the Barony as a thoughtful and dedicated leader. Considered a competent commander, Greyson makes up for any shortcomings in training and experience with an overabundance of enthusiasm.

Greyson was a staunch defender of King Fleetwood during the dark days of the Second War of the Reaches. In 906 TA, at age seventeen, the Baron of Rockingham made an impassioned speech supporting the Crown at a meeting of lords in Teufeldorf. The speech is credited for keeping the war effort going and inspiring the invasion of the Old Kingdom in 907 TA which ended the conflict.