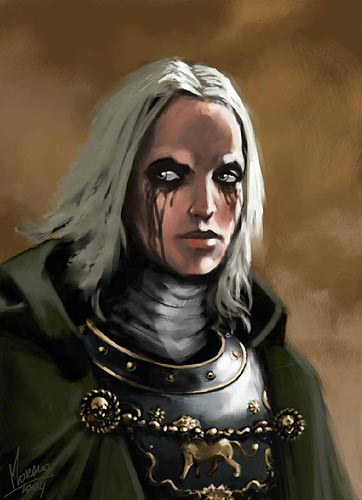 Hookhill and its surrounding environs were once the stronghold of the more organized of the local orc tribes. Around 850 TA, control of Hookhill castle and town was wrested from the orcs by a small group of evil humans led by Walford Woebringer. Little is known of Woebringer's background, although it is generally thought that he and his cabal were disaffected thugs from the Bandit Kingdoms exiled for their dangerous dealings in demonology.

From recovered logbooks which described the early Society, Walford Woebringer, Guildmaster of Horned Society, typically dressed in ornate green and gold armor with a long green cape. Woebringer had grey-white hair and strange red streaks below his eyes – thought to be the result of a demonic experiment gone wrong. The Guildmaster of the Horned Society was known for ruthlessness, although he was even-tempered and thoughtful in his decisions to murder and torture those that oppose him. It is rumored that Woebringer was immune to pain, although this theory was never confirmed. A shrewd businessman, the fortunes of the Horned Society grew significantly under Woebringer's leadership.

In 889-890 TA, the Horned Society was joined by a rogue druid named Bentbrood. Bentbrood sought to expand the Society's reach through necromantic sorcery. His experiments ended in ruin. The Lord March of Wirksworth had recently been granted annexation of the entire area by King Fleetwood. The sinister happenings at Hookhill led the Lord March to order a successful raid on the castle with both Woebringer and Bentbrood being killed.

The Horned Society is now under the leadership of Borik "The Nightblade" - an assassin who has several aliases in the region. It is rumored that Borik operates out of Shadebarrow, although Hookhill is not yet under the control of the Crown. It is also rumored that the Society is putting together an expedition to the Bloodlent seeking the source of Bentbrood’s corruption. Also rumored is the summoning of a horned demon to aid Nightblade’s cause. Already several druids friendly to the cause of the Reaches have gone into the Bloodlent and failed to return.

Although their power has been diminished, the land between the Cairn Hills and the Forest of Bloodlent is still exceedingly dangerous and under the influence of the Horned Society.

Deep in the dark woods of The Bloodlent, a man is slowly going crazy. Once a druid of renown, he now calls himself Bentbrood. And, what Bentbrood desires most is control over men and orcs – as their destruction, made even worse during the recent Orcish Rebellion – has finally driven him insane.

During a great storm, Bentbrood attempted to lay down a curse on all the races of the Realm - to cancel the souls of the living with the souls of the dead – emptying the Realm of all the sentient races. The dead on the nearby battlefields would prove fuel enough for the mad druid.

Knowing that their forestral had gone mad, the ents of the Bloodlent interceded during the final ceremony under a foul storm called forth by the druid. Just as Bentbrood raised his hands, the ents rushed him – taking the brunt of the curse. A final flash of rare purple lightning sealed the pact as the limb of the ent leader was splintered into Bentbrood’s staff and his eye was petrified into the glowing purple gem that controls his people. While mankind was saved, the ents were turned into the slaves of Bentbrood.

Fed by his new-found ability to control his subjects and undaunted in his desire to destroy humankind, Bentbrood decided he needed to go to the humans, summoning the storm at their castle, using the bodies of their dead to power its malevolent force.

Bentbrood has formed a pact with Walford Woebringer, the Guildmaster of Horned Society. His first encounter with the Society castle is recorded below:

His control over the storms has increased. Using the body of Ronak, he has created the ability to cause rage. Myrrha will give him the power of transformation, if he can take her remains from her tower. Golgothol, the spider queen, will provide poison. The Lord March will provide command.

Right now, the storms come up suddenly but last for only a few hours. The rain that is produced right now stuns or creates an overwhelming feeling of rage. As new powers are gained, the storms will become worse. Bentbrood will soon run out of victims in Hookhill and start using the Cairns to power his storms.

The storms always approach from the northwest – the direction of Hookhill. The weather is perpetually overcast over the Misty Woods, although the general plains are not affected – nor is The Bloodlent.

The forest of The Bloodlent is home to a large number of bandits from the Horned Society. The trees of this small wood include the beautiful sugar maple whose sweet, red sap is sought throughout the Reaches. Of late, shipments of red syrup have been very scarce. Historians believe that The Bloodlent was once part of the Misty Forest.

During the most recent military activity, the Orcs of the Evil Eye avoided Bloodlent, refusing to spend even one night under it boughs.

At the far western edge of the Misty Mountains, lies a large barren field which becomes a swamp in the mid-summer from the runoff of the Cairn Hills. Several small rivers and large streams lead into the areas which are littered with rock piles from a previous age. Several expeditions to the Cairns failed to return, after which the Lord March declared the area off limits. Rumors hold that this swampy morass is infested by the souls of dead warriors slain by the Orcs of the Evil Eye, while others claim that a mad wizard has taken up residence, building a tower from the stones of the Cairns. In either case, it is generally agreed that the Cairns are a place of ancient evil.

This lone hill at the northern end of the Misty Woods east of the Cairn Hills is the home of the Horned Society. The hill itself has sheer sides making it easy to defend. Tunnels are said to lead from the stronghold at the hill's summit into the forest below.

Jutting out of the earth in an unnatural way is a solid column of grey stone known as Hookhill. A large ledge protrudes from the southern edge of the hill just at the column’s summit. Several long formations of stone hang down from this ledge, giving the hill a vaguely hook-shaped outline when viewed from the east or west. While the terrain at the base of Hookhill is dense forest, a dark canopy of trees, the summit is bare of any vegetation.

On the summit, a castle stands, built on the ruins of earlier structures from the First and Second Ages. The current castle is surrounded by a high stone wall with a single path winding up to the gatehouse on the southern tip of the formation. A narrow wooden bridge connects the gatehouse to the main keep, which is comprised of four towers and a number of ancillary buildings.

The village below is entered via a single path leading from the south. An overgrown graveyard is the first site that visitors encounter, as the path runs between it and a small pond, providing access to the town. The graves run right up to the base of the hill. Hookhill village is a collection of a dozen buildings, mostly providing merchant services for the Horned Society.

Running west out of the Shadowyarn Mountains, the Rabid River is so named for its treacherous rapids and swift-flowing currents. The headwaters of this river is the reported home of a benevolent river spirit who can predict the future.