Difference between revisions of "Hrasnkel" 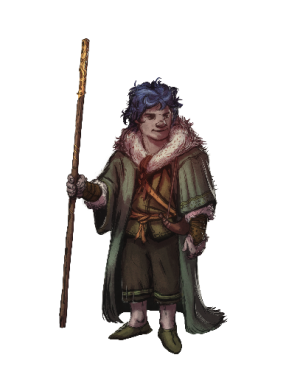 Hrasnkel was born in the northwestern edges of the Eidolon Moors where the south fork of the Dark River dumps into the vast swampy lands of the gnomes. Suffering in an unhappy childhood, Hrasnkel was a loner with significant anger issues. Oftentimes, he would fight with other children both at home and school. Unlike most of his peers, Hrasnkel showed no aptitude or interest in traditional gnomish crafts - tinkering, magic and the like. Instead, he could be missing for days roaming the wilderness - adventuring in the hobbit hills of the Elderberry Downs or exploring the dark mires of his homeland. But, it was the forest of Welkwood that caught the young gnome's attention. The tangled woods, the elves and fey. It was here that Hrasnkel felt at home. It was here that he had his first dreams. It was of a mansion sitting atop a hill - ancient but well-kept - an odd vision for a woodsman.

One day while sitting at breakfast with his family, he announced that he would be departing Eidolon Moors for a life of adventure, a self-imposed exile from the moors. Some believed him. Some did not. But, it is understood that most were happy to see the irascible gnome leave. Having left home, Hrasnkel wandered north through the Welkwood, the Grimore Jungle, the Blutwald and the Teufelwald. Always heading north, drawn by some unknown power - his dreams increasing with each mile he traveled. Along the way, Hrasnkel gained skills with animals, hunting, tracking, and the ways of the woods. He always kept to the trees - his distaste for other men and women lying just beneath the surface and ready to erupt at the slightest provocation.

Finally, Hrasnkel arrived in the Bryn Mawr. He traveled to the walls of the great city of Teufeldorf. Inside the city, he found acceptance of his odd ways and hot temper. He could seemingly disappear into the crowded streets without a single glance from others. It was here that his dreams had drawn him. Climbing the walls of the Royal Quarter, Hrasnkel found the house of his dreams. How long he stood outside Wickham Hall, he can't remember. He does remember Geoffrey Wickham coming out and standing in front of him, surveying him - seemingly peering into Hrasnkel's soul. They nodded to each other, and Hrasnkel entered his new home.

Now, Hrasnkel is still angry and decidedly un-gnomish. Woe to the passerby that points that out to the barbarian. He arguments aren't verbal, they are always physical. And while he has leaned some social graces, Hrasnkel is still quick to anger and surly at the best of times. He does retreat back into the Bryn Mawr on occasion to reconnect with the forest, but his life at Wickham Manor is interesting and his dreams have taken on a new fascination for him.