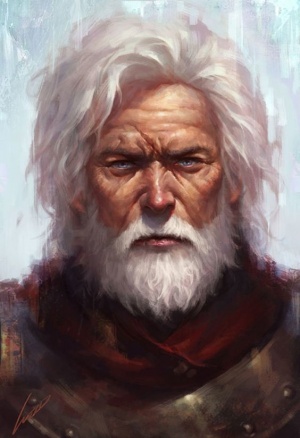 Hugo Middlewich, Ninth Baron of Middlewich, is in his mid-seventies with thick white hair and a full white beard. Unlike most men his age, Hugo's appearance is that of chiseled hardness with little sign of aging beyond the wrinkles in his skin. He is a stubborn man who is accustomed to obedient servants and responsive soldiers. Hugo's one weakness is for his wife, Lillian, and his nine daughters over whom he dotes apologetically.

Hugo likes to be a big fish in a small pond and has made his home in the town of Middledale his entire life. His estate in the village is on a hill overlooking the town with the tangled trees of the Ironwood in the distance.

Born in 847 TA, Hugo's life has been defined by two events. The first happened when he was a young man, 25 years old, and freshly crowned the Ninth Baron. Hugo hosted a feast for the Middle Reaches Barons including the Lord March Richard Moonstoke who was a few years older than Hugo and also recently crowned. At the feast, Moonstoke's wife Jillian, beautiful and smart by all accounts, was poisoned mysteriously. Accusations flew and the two men headed towards a duel. Finally separated by the other guests, Hugo and Moonstoke have been bitter enemies ever since. This rivalry is now called the Old Men's Feud. The mystery of Jillian's death has never been solved.

While Moonstoke fathered four more children by a second wife, Hugo turned forty without an heir. Many blamed a curse laid on Hugo at the feast by the Lord March. In desperation, Hugo travelled to Teufeldorf to seek magical help in fathering children. What transpired there is not known, but Hugo returned a month later and his wife, Daria, became pregnant with the first of what would be nine daughters. Like their mother, each child was gifted in the art of music. Daria and the girls soon moved to Teufeldorf and took residence in family mansion - taking advantage of the musical training afforded the city. Now ranging in age from 20 to 34, several of the sisters have married and their children - again all daughters - show the same proclivity. While Hugo remains at the family home in Middledale, visits by his wife, daughter and granddaughters are the highlight of his existence.