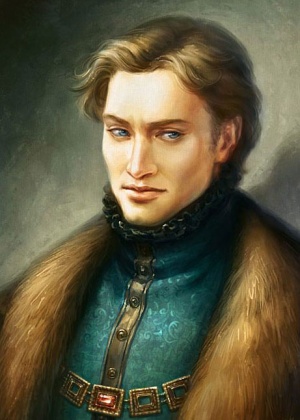 Jenson Tenbury, the Sixth Baron of Tenbury, is a young man of many talents. Growing up in Tenbury, young Jenson took an obsessive fascination with the vineyards along the Loudwater as it tumbled down from the peaks of Eagle Mountain towards the forest of Bearwood. He happily assisted the vignerons and vintners in all aspects of the winemaking process. By age eight, Jenson could distinguish different vintage years and correctly predict how different grapes should be blended.

His family life was dominated by his mother, Beatrix (now Dowager Baronness Tenbury), who raised Jenson and his twin sister Jennifer strictly and with constant supervision. She accompanied the children to Teufeldorf when they went there for school. Jenson's education at Blackfriar College was a happy one, and he excelled at academic pursuits with a particular eye for the running the family's vineyards and orchards. Unlike Jenson, his sister Jen was a bright, popular, and a charismatic leader. She excelled at military studies and swordsmanship.

When his father, Haider Tenbury, 5th Baron of Tenbury died in 907 TA while serving the Crown in the Second War of the Reaches, Beatrix made an unusual decision. She and Jen returned to the family castle at Lechlade Keep where Lady Jen took control of the garrison and the administration of the barony. Jenson remained in Teufeldorf to run the family's wine business, a task which he reclusively carries out from the confines of Tenbury House, a sprawling mansion in the Royal Quarter. Through his agents, Jenson controls much of the merchant wine activity in the city.

Jenson's social circle is very limited, just a few close business associates. He is unmarried and has never shown interest in marriage. It is rumored that he communicates with his mother daily via a magic mirror at the estate.