It is said that in the days of the Dragon Wars nearly three hundred and fifty years ago, that there lived a tinker named Kayler in the small village of Ardenwood in the northern hills of Ariandor. This young man lived a sparse and solitary life in his small shop above Merchant's Street. While his lifestyle was a simple one, his creations were complex and fascinating. Kayler blended the mechanical and magical in ways that were very nearly perfect. In time, his reputation spread to many of the outlying towns and villages around the rim. The demand for the tinker's work was so high that the business soon consumed the young man. One day, when Kayler was nearly fifty, a letter arrived with special courier from Bertran the Bold informing Kayler that he had been choosen to be the Master of Woodbury. The courier waited as Kayler closed his shop, and the two set out for the spire where the great university was being constructed. Upon the way, Kayler and his guide happened upon an ancient fortune teller. The withered lady told Kayler that the message had been a ruse to trap him, and soon after that, the two men narrowly escaped a rock slide. Kayler was berserk with rage as he raced back to Ardenwood. There he found his shop destroyed and his belongings stolen. That day, it is said, Kayler's mind snapped. Afterwards, he left the village and settled in a small uninhabited valley in the northwest part of the rim. His distrust of humans was immense, and he allowed only the gentle dragon folk to visit. (The dragon folk being the caretakers of the dragon's eggs - a race now thought to be extinct). Kayler began constructing an army of magical mechanical titans to wage war on the humans that he so bitterly despised. These titans were rumored to build the castle Jumbleweed in Kayler's valley. Outside, the walls the dragon folk tended to the needs of the baby dragons and kept a watchful eye for intruders.

Every decade or so, Kayler would mount an attack against a nearby castle or garrison. Each time, his mechanical beasts would fail and Kayler would go slightly more insane. Finally, the now-mad tinker blamed the dragon folk for his failings. In a blind rage, he stole the Sword of Tien and the Cube of the Armageddon from a visiting dragon lord, cut off the creature's head, and ordered his army of titans to annihilate the dragon folk. And thus, Kayler (now known simply as the Mad God) was seen for the last time. Standing high on the walls of his castle, foam bubbling from his lips, screaming curses at dragons and men alike.

In the last forty years, no news had issued from the Mad God's Castle. It is said that the tinker is now in alliance with the rimsghouls working on his most powerful army. Most recently, it has been rumored that the dragon lord Tienwerbaktur has started a siege of the castle in order to regain the stolen sword and cube.

Using the random teleport pyramid, the party teleported to Jumbleweed, the Mad God's Sanctuary. Again, this adventure is outlined on Maps 16 and 17. The party didn't explore much of this twisted dungeon, but they did manage to find the Cube of Armageddon in the reconstructed village of Kayler the Tinker. Kayler was subdued, and the party was led through a maze of hallways only to emerge in an old cathedral. The cathedral was filled with strange robed creatures who were caretakers of the nestlings (strange lizard creatures - akin to rimsghouls?). Passing quietly through the cathedral, the party entered into a workshop area where Kayler showed them the Sword of Tien (which the party took). The party exited Jumbleweed through a series of underground caverns. In one of these rooms, the great black dragon, Balidundruk, was being held prisoner by several red dragons. Falstaff slept the dragons, and the party set Balidundruk free. She promised to return with news of what was happening in her realm.

There was a small side adventure at this point. Falstaff discovered somebody had been rumaging through his belongings. The party tracked down a servant who had done the actual deed. She was tortured into revealing that some Guildsmen had hired her. The party tracked the Guildsmen to a cave near the town. The party wailed on the Guildsmen and gained a confession that a gnome (matching Hylax's description) hired them to gather information concerning the Cave of the Elder Gods.

The party used a teleport pad in the cave to transport themselves to the Castle of Mardon the Red. There, they gained some treasure in a structure that can be found on Map 18. Two magical staves were gained. They seem to allow for special communication and spell multiplication. However, they are also thought to be a way for the Guild to track the party. Fuzzwort was killed by some priests of Mardon the Red, but he was resurrected at great cost. The party returned to Briar Forest. 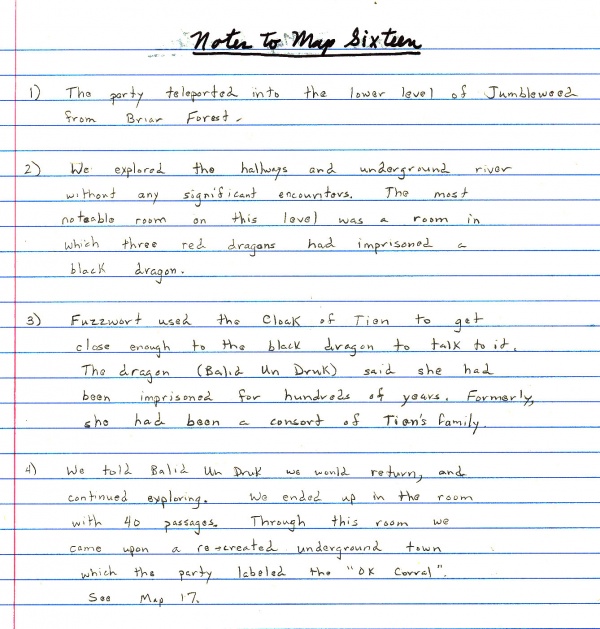 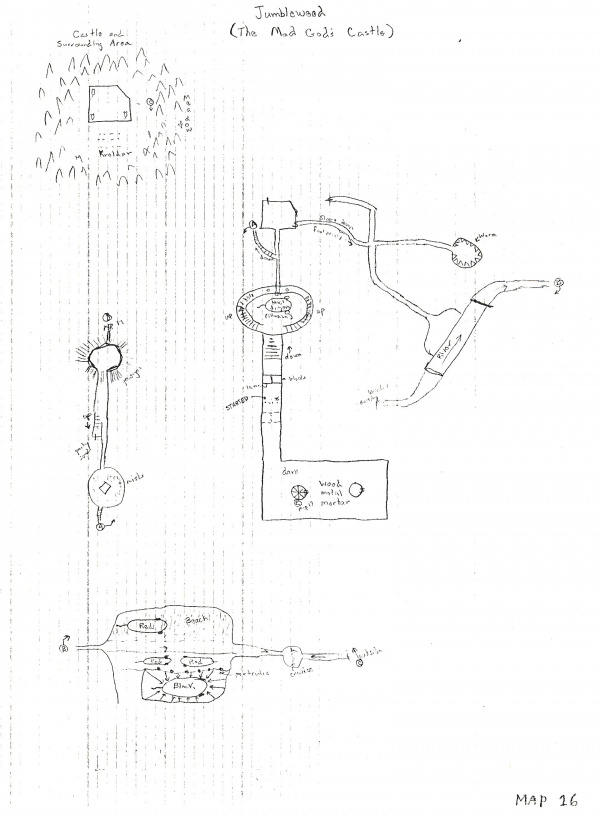 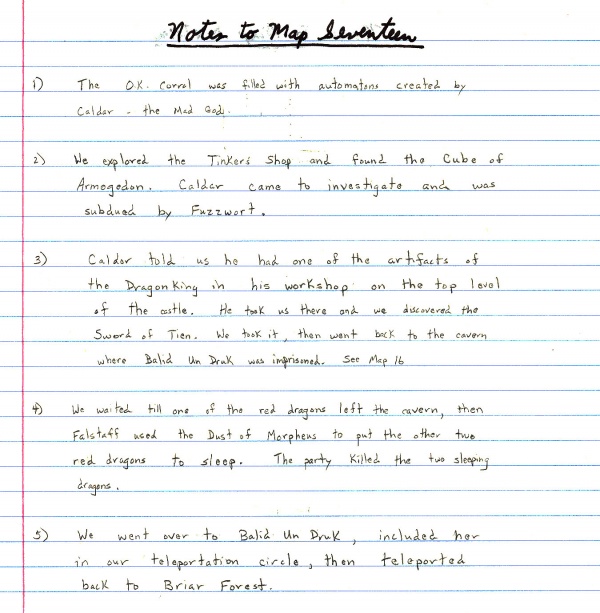 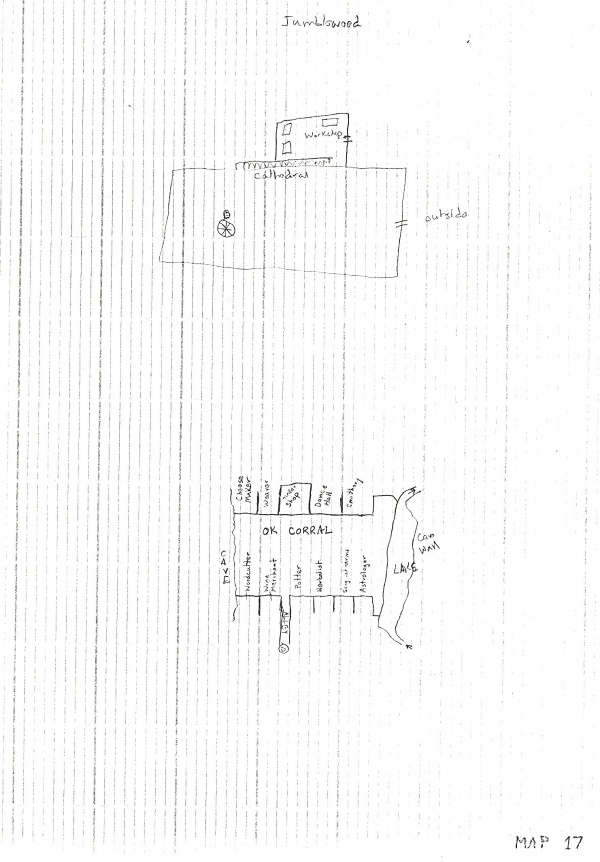 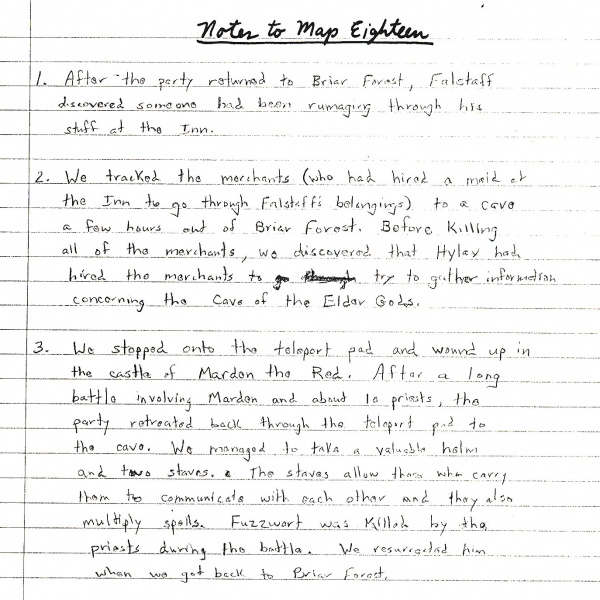 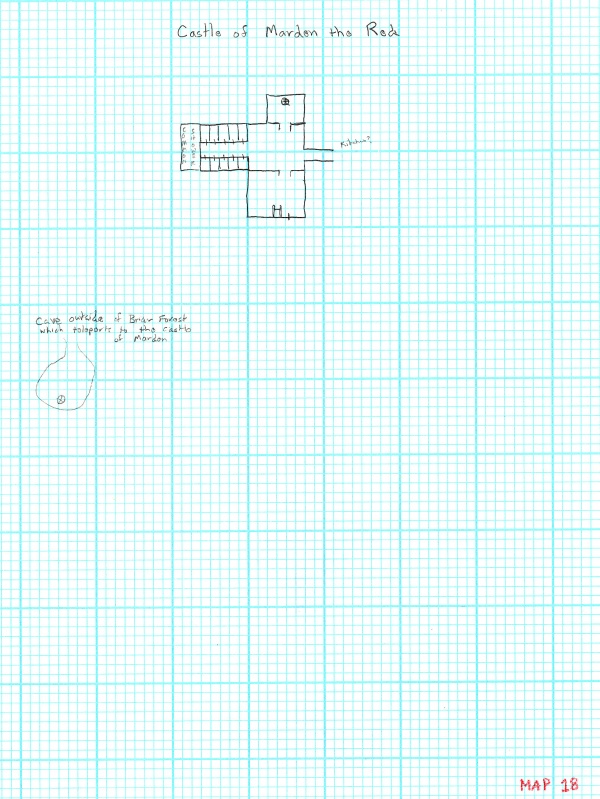 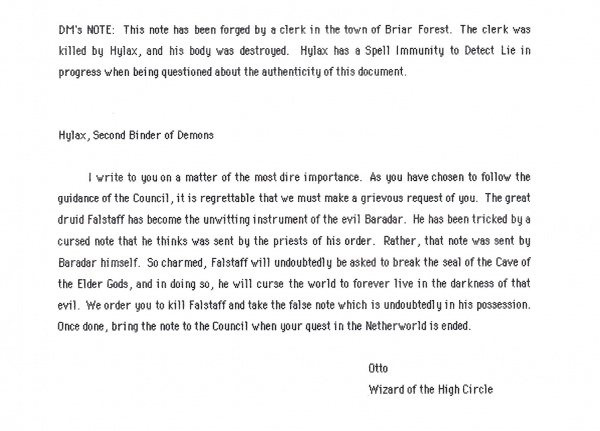 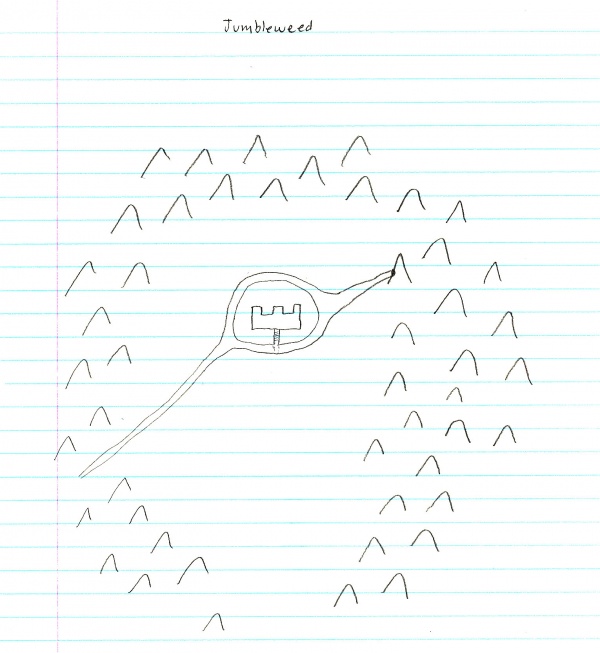 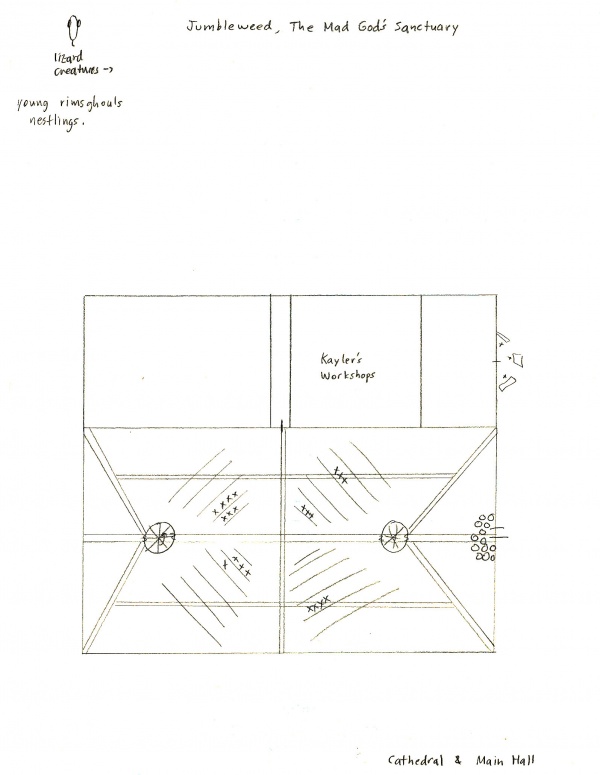 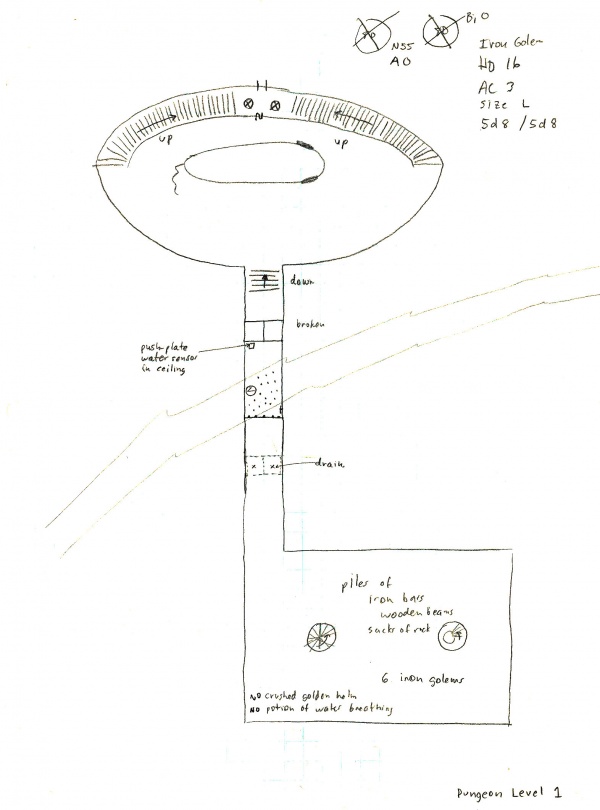 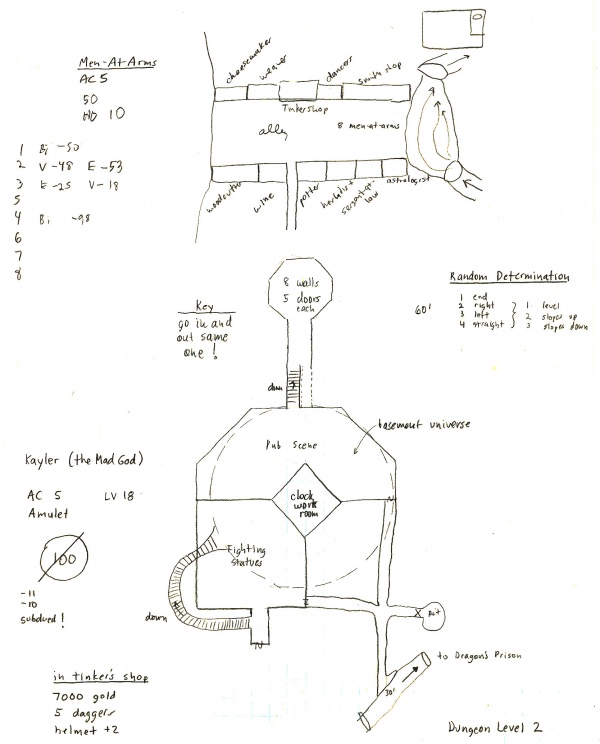 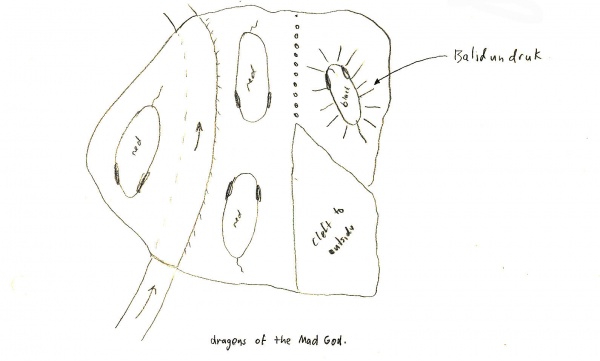 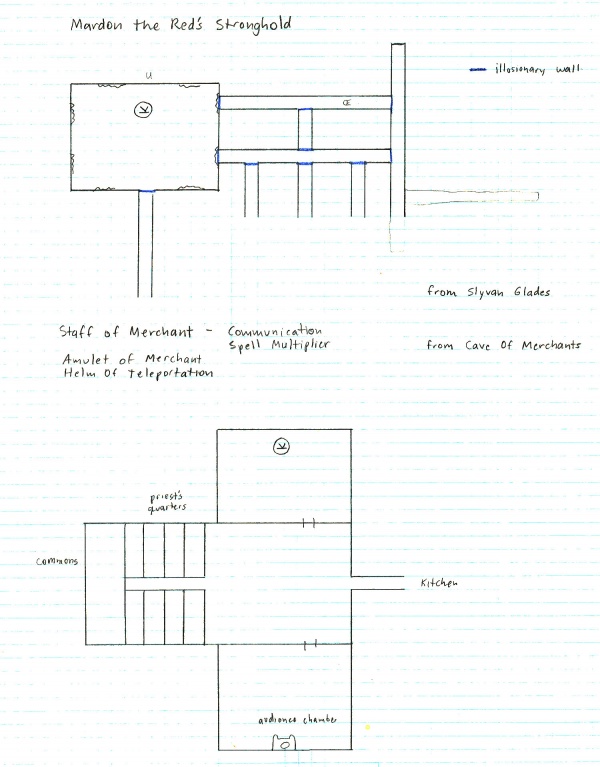