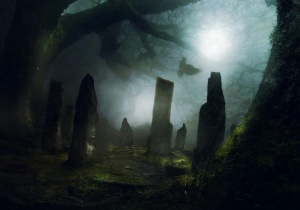 The Grovewalkers by Miranda Clear 879 TA

Legends tell that, in time, the early elven druids also discovered the grovewalkers. Soon after that discovery, as tales spread, the dwarves and humans of the Realm sought grovewalkers out to understand and control their teleportation powers. Aggressive and unrelenting, a number of grovewalkers were slain by treasure-seekers. In order to protect the stone fey, the druids built large stone circles - with dozens of stones resembling the grovewalkers - in which the solitary creatures could hide. Over time, these standing stones became sacred places for the druids - both in protecting the grovewalkers and providing transportation across the vastness of the Evenwild and forests of the Realm. It is said that today only the highest order druids communicate directly with the grovewalkers.