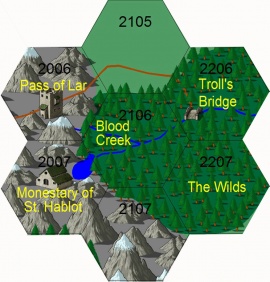 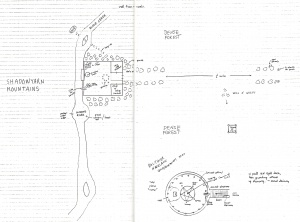 Rumors of a meeting between the mysterious power behind the storm which drove King Gregory from power and the leaders of the Orc Nation are rampant at Rivershaw Castle. It is widely believed that a meeting is going to take place within the month at a small shack near Blood Creek. It is thought that several of the major orc tribe leaders will be in attendance. There is talk of several ultra-powerful evil types showing up to plan for the next few years of trouble. The party decided that even if the rumor was just that (a rumor), it was still worth investigating. And, off the party went.

Adventures at the Meeting on Blood Creek

They traveled south after exiting the Pass of Lar until they came to a trail marked with two skulls on posts. Along the way, there were a number of scouting parties to be skirted. After avoiding several orcish traps, a tempting Will-O-The-Wisp, and the Temple of Spirits, the party was journeying along the path towards Blood Creek.

A small mill was the only building near the river. Exploring carefully, the party stumbled on a group of gambling orcs. They were busy playing a game called "three card guts," but only one of them really knew what was going on. After quietly checking out two offices, the party searched around the river for clues. A set of footprints led to a cave which turned out to be yet another trap. Seeing the trap for what it was, it was left unsprung. However, searching south of the mill proved fruitful. It was there that a glowing spot in the river was found. Somehow getting around a giant electric eel-like beast, the party entered into a strange circular hallway.

Using a glassee spell, Hylax found a secret hollow chamber in which the expected meeting was taking place. Breaking through the walls, the party decided to do a frontal assault. The shadowy area of cold (the party's first meeting with Baradar, the Dark Man) proved to be impenetrable. Only when the battle fared poorly did the Dark Man teleport away. The flame guards proved to be very tough (but U-Gene smiled as he snicker-snacked through them), as did the demon, human, orc, and ogre representatives around the magic circle.

The flame guards were destroyed, but reinforcement demons and flame guards forced the party to flee before the job was completed. However, the purpose of the foray was successful. The Meeting on Blood Creek was disrupted and the treaty between the Dark Man and the Orc Nation would be several more months in the forming. It is very possible that this adventure saved the Eastern Reaches for at least another season. 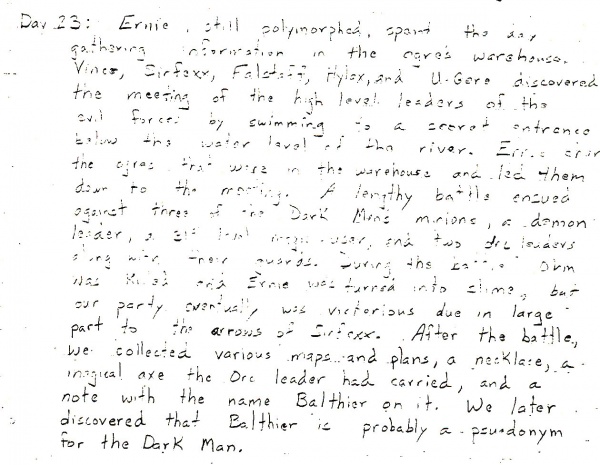