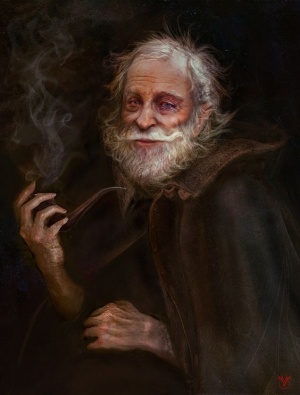 Captain Obed Marsh, Harbor Master of Teufeldorf, is a strange fellow and a favorite subject of the city rumor-mongers. Nothing is known of Marsh's early life. Even his race is not known - as he either ages very slowly or has some elven blood in his lineage. His claim to being the son of a mermaid is, most likely, untrue.

What is known is that Marsh arrived in Teufeldorf around 820 TA as the captain of a merchant ship, The Cygnet. He presented the Crown with a land grant in the Royal Quarter that had been awarded to Silver Southwark when he was named Baron. Marsh purported that he had won the land in a game of cards. He also reported that he had found an underwater city filled with gold doubloons - which made him, at the time, the wealthiest patron in Teufeldorf.

Within a year, construction began on the Captain's Cabin, the fanciful name of the sprawling Marsh Estate. The estate, wildly controversial at the time, was the only residence in the Royal Quarter not owned by a baronial family.

In 885 TA, Marsh applied to be the Harbor Master of Teufeldorf. His encyclopedic knowledge of every ship he had ever seen and a master's understanding of maritime laws and customs won him the job, although no one understood why a fabulously wealthy noble would want the demanding position.

His boundless energy is another source of wonderment. Marsh can be seen gambling almost every night in a pub or tavern somewhere in Teufeldorf. Drawn to big cash games, the Captain is a fair player - losing and winning with reckless abandon. He drinks heavily and can often be found in the brothels after games. Then, each morning at sunrise, he is in his office at the docks carrying out his job as the city's Harbor Master. He works tirelessly through the day, retiring at sunset - just to be seen an hour or so later heading for the gaming tables.

A shrewd and perceptive administrator, little happens at the docks without Captain Obed Marsh's knowledge.