Oblivion and the Land of the Dead

In the Loftwood, on the shores of the Great Sea, lies the small village of Duskwillow. At the center of town lies an odd stone sculpture which is a Keystone to Oblivion. The sculpture has been in the center of town longer than any of the locals can remember. It is the statue of an old man, gnarled and bent, leaning heavily on his walking stick. He points up, but he looks down. The statue sits on a pedestal of polished marble. The marble is traced with a pattern but otherwise looks pristine. Solving the riddle of the Keystone while holding a Dead Man's Coin will transport an adventurer to Oblivion. 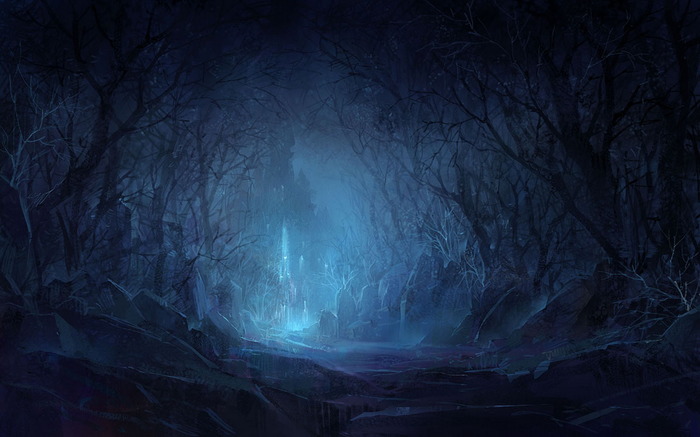 In the dusky twilight of a foggy autumn night, you may see the visage of a lost brother or mother at the edges of the forest. A brief glimpse of familiar movement, a long unseen but not forgotten face just as darkness envelopes the land. Many believe that what you are seeing is a shade - a projection of your loved one into the land of the living. As if they wander the land in turmoil. What few know is two other worlds lie on top of the world of sunshine and life. The same mountains and rivers run through these other lands - they are merely washed out views of the same landscape. Muted in greys and browns, perpetual twilight engulfs them. In this oblivion, the souls of the dead wander - some unknowing that they are no longer a part of the living world. And, when the moon is dark and wind howls in the trees, sometimes they can emerge into the land of the living - although those moments are rare and fleeting. For the most part, these souls look down - hoping one day to sink below their grey world into a black world. A world without life, the land of the dead.

Philosophers call this grey land Oblivion, the Land of Shades. The black land is the Land of the Dead. While the latter is locked away from contact with the living, sometimes the fabric of the world lets the shades walk.

According to adventurers who have traveled in Oblivion, the land is primarily populated by shades. The moans of the dead can be heard as a great caterwaul against the silence of the land. Other denizens include small non-corporeal, flying creatures called Nigglers. They are reported to be attracted to magic and magic items. Appearing from the ground or nearby dungeon walls, Nigglers emit a high-pitched, stunning scream which allows them to "kiss" magic items, draining them of power.

The Dock of Eternity

From the logbook of the Sojourn to Oblivion adventure, one path from Oblivion to the Land of the Dead is via the Dock of Eternity.

A single path winds along a desolate finger of land. The countryside is barren, bereft of trees and vegetation. The sides of the path are lined with white stones, that appear from the periphery of our vision to be skulls. The wind is constant here, howling in from the sea. The feel of this place is that of ancient power. At the end of the path, a set of stairs leads down to a dock. Pulled up at the dock is a strange boat, made of the blackest wood. In the boat, a skeletal man stands watching. He sways gently as the boat rocks back and forth.

"I am March, one of the twelve keepers of the gates to the Land of the Dead. As your souls are not yet prepared for this journey, a Dead Man's Coin is required for passage."

The skeletal figure reaches out a hand, awaiting payment. Once the coins had been given, the boat plunges into the icy cold water. Without warning, the boat sinks into the inky black sea. Breath is lost, and lungs fill with water. Consciousness is lost. We awoke on the shore. Next to us is the same dock. However, it is now rotted and collapsing. There is no sign of March or his boat. The sky overhead is now pitch black. Light sources are dim by comparison to normal. There is a cold chill to the air, and we feel an oppressive weight and sense of helplessness. A light mist seems to be falling, as our clothes are damp.

Land of the Dead

The Land of the Dead is a grim place. It smells with the faint sweetness of decay. The sky is leaden as if the sun has just set on an overcast, gloomy autumn afternoon. There is no breeze, and there are no discernible clouds, just an unending streak of grey. The temperature is warm and the air is heavy with moisture. It is not uncomfortable, just muggy and oppressive. A sense of despair is ever-present.

The land appears to be empty, with no natural denizens.