It would have been a major scientific upheaval in the twentieth century on Earth had it not happened several billion years later in the constellation of Perseus several hundred light years away. A small orange-yellow star burned in space where once the § Perseus binary system frantically transferred its mass in a vain attempt to placate the hardened laws of physics. For those brief years in the twentieth century, § Perseus was called Algol and represented the classic model for the evolution of semidetached binary star systems. In the earlier reaches of Earth astronomy, Algol had been called "the Demon Star" by the Arabs. A fitting name for such a strange astronomical anomaly. It is true that for years the large main-sequence star slowly accreted its matter onto the small subgiant. Smug astronomers sat in their high offices and collected their grants secure in their knowledge about the demon Algol. Little did they know that the small subgiant was receiving mass faster than it could adjust its state of equilibrium. Both stars expanded, and their Roche lobes contacted. The two stars became one, and a cataclysmic explosion sent four solar masses of material screaming into space. But some of this matter remained under the influence of § Perseus. Enough mass to make five modest planets and ten small moons. Millions of years passed, the planets cooled, and atmospheres formed. 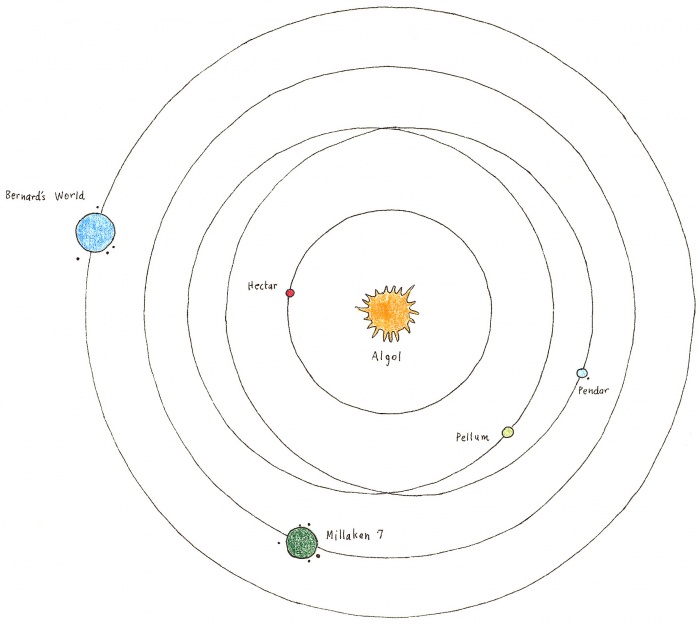 Of these five worlds, the closest to the sun is a small fiery world called Hectar. Hectar is a rocky piece of iron with no atmosphere and surface temperatures hundreds of degrees too high to support life. The two worlds farthest from the sun are simply great gaseous spheres with streaming clouds, layers of hydrogen gas, liquid hydrogen, and exotic metallic hydrogen fused together by rains of liquid ammonia and ice crystals. Millaken 7 and Bernard's World are not places for life to flourish.

Somewhere in the middle of this infant solar system lay two small worlds, Pellum and Pendar. These twin worlds circle Algol in intertwined orbits that cross paths every 3,600 years. It is a strange twist of fate that these twin worlds should be so different. Both planets developed life in due time for they were comprised of seas of amino acids with dynamic atmospheres and great storms of lightning and thunder. And so it happened that one successful protocellular line spontaneously generated living things from non-living matter. It is said that life on Pellum developed from a common L-amino acid base. On Pendar, it was the D-amino acids that formed the origin of life. And so today we see the effects of those first few moments of history. Almost three million years have passed, and the fates of Pellum and Pendar are still intertwined.

Pellum is a world highly developed in its technology. For the past fifteen thousand years, humankind has been the dominant species on the planet. First humans dominated the lands, then the sea and air, and finally the space between the worlds. Yet for all its technological advances, life on Pellum is still marked by wars, hunger, and greed.

Pendar is a world dominated by magic and fantastic beasts. Great dragons circle the skies, elves live deep in primeval forests, their dwarven cousins digging mines into the bowels of the earth. Mankind is the upstart on this world - prolific and dominant, but there are other more ancient forces that haunt the nightmares and folktales its inhabitants.

The First Journey to Pendar

In the early years of mastering space travel, a four-year scientific mission was conceived to explore Pellum's closest neighbor, Pendar - primarily to observe and gather specimens for later analysis.

Each leg of the trip between worlds was expected to take less than a year when the planets reached their recurring 3,600-year perigee. The mission would have slightly more than two years on Pendar to achieve their objectives before needing to launch for the return voyage.

The mission launched and arrived at Pendar in 12053 PC (Pellum Calendar).

The initial explorations proved that Pendar was indeed habitable - and already richly populated by a variety of creatures beyond any imagination of the scientists back on Pellum. A number of sentient races were discovered. Minerals, plants and other resources were abundant. It was, however, the existence of "magic" that most fascinated the crew. The elves and dwarves showed proficiency in harnessing its power. There was also something less tangible in the darkest valleys of Pendar - an ancient brooding presence - intelligent and powerful beyond all reckoning - but almost dormant, just an undercurrent in a fantastical world of wonders.

Departing Pendar in 12056 PC, the scientists took back thousands of specimens and samples which were cataloged and studied, bred and cross-bred, poked and prodded. Many secrets were discovered, but most of Pendar's secrets remained elusive and unanswered.

The Second Journey to Pendar: Excaliber

In 15653 PC, a second scientific vessel was sent from Pellum to Pendar. Unlike the earlier mission, a great ship, Excaliber, arrived for long-term study of the planet.