Being judged worthy of the copper squad during his tests, the party entered into the army of Parknor T. Travellor. Ironically, the copper warriors were led by Justin, Runebrother of Hylax. Once the sixty-six warriors were gathered together in Teufeldorf, Parknor revealed the plan to his men.

In the great hall of the Castle of Demogorgon, a festival was taking place. A festival celebrating the virtues of evil brought in many of the most powerful figures in the Realm. However, this party was to be a bloodbath that the demons would not appreciate. The six squadrons of adventurers were to be teleported just outside of the Great Hall. Then upon a command signal, each would enter one of the six balconies overlooking the hall. Quickly dispatching the occupants of each balcony, the six squadrons were to make for the floor and Demogorgon.

Parknor T. Travellor (leading the platinum warriors) held the most difficult position, while the party held a position near Demogorgon. Although the specifics of the raid were never revealed publicly, a single drawing of the event was found many years later in the archives of the Crown. 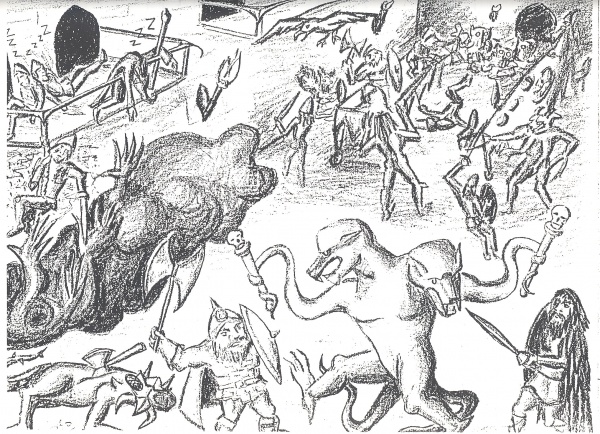 In the painting, U-Gene and Vince are attacking Demogorgon. A dwarven axe protruding from an Ice Devil. Near the party's balcony, a black cloud creature is reaching for a very dirty Ernest Goodfellow. On the balcony, Hylax and Sirfexx can be seen sleeping after casting a few runes. Finally, a crow can be circling the foray (concentrating no doubt). And so it was. The battle raged on for sixty-six minutes. Many were slain on both sides (including Justin, Rune Brother of Hylax), but in the end most of the major demons escaped, including Demogorgon (who vowed revenge on U-Gene). Only forty of the original sixty-six returned to Teufeldorf after the battle. Shortly thereafter, Parknor T. Travellor disappeared, never to be heard from again.