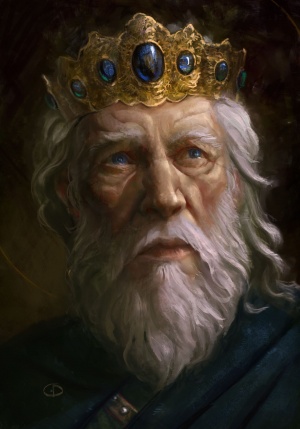 Richard Moonstoke is the Lord March of Wirkswirth. Born in 843 TA, Moonstoke is now in his late seventies. He is a handsome man, by all accounts, and still active in governing the March.

Moonstoke was active in the First War of the Reaches, and his soldiers were critical to subduing the Orc Nation and bringing stability to the region. Innovative in recruiting new soldiers, Moonstoke long ago set up the tradition of accepting any man or woman willing to denounce their family ties and fight orcs for his kingdom. While Wirkswirth has become home to a significant population of criminals and the disenfranchised, it remains the most powerful military force in the Middle Reaches. During the war, a long-standing feud with his southern neighbor led to withholding troops and the subsequent sack of Middlefield in 886 TA. In 887 TA, Moonstoke held Rivershaw Castle against all odds, forcing the orc and goblin armies to retreat to the Dourwood. Moonstoke was heralded a hero at the end of the war.

The Moonstoke family has long made their home at Rivershaw Castle - one of the few barons not to have a mansion in Teufeldorf. Rumors persist that the Wirkswirth lands within the Royal Quarter of the City-State were sold to the Blackburns, a merchant family, in exchange for much-needed gold to support the military efforts of the barony. The Crown denies this transaction.

The Lord March has had two wives. The first, Jillian, was mother to the first four Moonstoke children (Harold, Connor, Tolbert and Lightfoot). Harold is currently in Teufeldorf leading the Wirkswirth knights in service to King Fleetwood. Connor was killed in battle, but Tolbert is serving as a cleric in Teufeldorf and Lightfoot is undertaking a secret mission for the Lord March. Jillian was killed by poison during a feast at Middledale – a source of Richard’s hatred for his southern neighbor, Hugo, Baron of Middlewich.

The younger four children are the offspring of Richard’s current wife Bridget. Audrey, Rae, and Milo are in training as either knights or diplomats at Rivershaw Castle. Among the children, only Octavious has been given duty at the Black Owl Garrison – much to the dismay of his mother.