Rise of the Old Kingdom 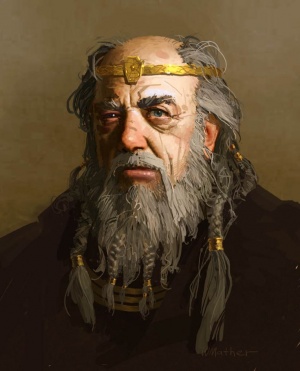 By the beginning of the fifth century, almost twenty thousand humans lived in Rembia. By the end of that century, those numbers increased to fifty thousand strong and their race outnumbered the combined elven and dwarven populations. Although they had very short life spans, humans reproduced at a prolific rate constantly expanding their territory, depleting local resources, and taxing the environment.

It was during this great expansion in the fifth century, that records of the first organized rulership outside of the traditional family clans were made. Although territorial and social disputes were nothing new, no organized permanent military force was thought to exist during these times. In the early 470's FA, a clan ruler by the name of Tilwald Kingson became embroiled in a bitter dispute with a neighboring clan. The nature of the dispute is unknown as are most of the details of the conflict. It is known that Tilwald raised an army to defeat his enemy with the help of the elven wizard Elros (who according to the Elven Histories of Kurak was driven mad by the magical research he was conducting). Most notable about Tilwald's victory was that upon the surrender of his rival, he did not disband his army. Beheading his enemy, in a breach of social protocol for the times, Tilwald then claimed his rival's territory and people as his own, established a standing army, and became the first of the human "kings".

As Tilwald's army continued to conquer his neighbors, the clan system of Rembia quickly disintegrated. When Tilwald Kingson died, his eldest son, Alfric, claimed the hereditary rights to his father's lands - marking the formal end of the clan system in the Old Kingdom. Unable to directly govern a growing number of now-leaderless clans, Alfric established the tradition of granting the title "king" or "lord" to the most powerful kinsmen who would proclaim fealty to his rule. As long as fealty remained, each clan - now called a kingdom - could choose their leaders according to their local customs and traditions.

In order to distinguish his rule from those of his vassal kings and lords, Alfric adopted the title "Overlord". In 496 FA, Alfric dropped his kin-name of Kingson and became Overlord Alfric I of Rembia. While considered the first ruler of Rembia by court tradition, historians typically grant that honor to his father. Alfric I ruled until old age - providing stability to the burgeoning dynasty. Upon his death in 541 FA, his son, Alfric II assumed the mantle of Overlord of Rembia.