The winter of 889-890 TA was one of the longest on record for the citizens of Teufeldorf. For those who did not flee before the city was sacked by the orcs were subject to massive starvation, slavery and depredation. The snows fell heavily as the orcs replaced the wooden barricades that had held out against the siege with stone walls, taking particular delight in destroying the old architecture of the city.

The arrival of the floating castle of Baron Valdemar that winter was the lowest point for the city. Two large, circular areas of the city were raised, first by fire and then by slaves, taking the rubble away to be used in the building of orcish fortifications. Soon these two circles became known as "the pens", for they were used to round up any who resisted orcish rule. Each week, the occupants of the pens were magically destroyed, and in their place several hundred knights from Sandal would appear. The bodies of the deceased would be animated by the priests of the Tomb Kingdom, and the army of evil grow more devastating.

Late in the winter, the townsfolk saw the first ray of sunshine. A flaming pillar appeared under the castle, crashing it into the city. Having lost the source of their magic, the pens were abandoned and no new enemy troops entered the city. A resistance movement in Teufeldorf spread rumors that King Vince had returned (using intelligence from his travels to Oblivion - see below), and it was his handiwork that destroyed the castle.

However, the siege of Teufeldorf would take another seven months to be successful. Led by the irascible Dugald Axeworthy, the forces of good successfully sealed off the city until reinforcements from the dwarves, elves, gnomes and Eastern Reaches arrived after the spring plantings in March. However, the forces of evil included 3600 infantry, 2000 cavalry, 2300 goblins, 700 trolls, 600 ogres, and 20 giants. It was, in short, the largest single concentration of evil ever to be assembled on the field of battle. For four months, the siege went on, each offensive was repelled by the orcs, knights and undead. Using the citizens of Teufeldorf as shields and showing no regard for their own lives, the enemy proved to be formidable.

Far to the south, a large contingency of knights, mustered by crippling wartime taxes, headed north from Sandal. In March, they attempted to siege Crossgate Castle, which had been cleverly reinforced by King Vince. The siege failed, and the attackers moved on northward. An April siege of Admunford also failed and was quickly abandoned. The target of the knights, first thought to be diversionary, was recognized as an attempt to break the siege and bring destruction to those outside the gates of Teufeldorf city.

Once discovered, the kings of the Reaches mustered more troops and moved quickly to intercept.

In July, just one short month before the knights from Sandal would reach Teufeldorf, the siege was broken. It is said that U-Gene himself stood outside the gates and challenged the entire orc nation to battle. But others claim that the mysterious cleric Fuzzwort called upon some divine source of luck to weaken the gates and bring about the end of the battle. Whatever the source, the siege of Teufeldorf ended in mid-July 890 with the complete routing of the orcish army and their supporters. The party was given a hero's welcome to the city.

In August, the remaining knights were encircled by armies of the Reaches using the gnomish tactic of "swamp" fighting, spreading thin concentric rings of troops to contain the army's supply trains and reserves. The final battle, known to history as the Battle of Middlewich Fields (hex 1814) was a victory for the forces of good. With the armies contained, a number of small battles finished the evil off with very few survivors. This date marked the emergence of the gnomes as a military power in the region.

In late August, a massive sandstorm swept through the Sands of Time. Lasting almost a month, scouts reported that the temples of the Tomb Kingdom were again buried. There have been no sightings of undead in the area for quite awhile now.

Completely decimated by a war that had run for five years, the orc nation collapsed. The warbosses of the nine great orcish warbands bowed before the three kings of the Reaches and promised fealty, although past history has never shown them to be entirely trustworthy. The orc general Gruumsh was reported to be slain, although his body was not found. Later rumors hold that his ghost now haunts the warbosses and makes appearances at tribal meetings chiding his kinfolk for weakness.

To the south, the Sandalese people rejoiced in the streets at the destruction of Baron Valedemar's castle and the end to his tyrannical rule. The coastal cities of Sandal have formed a loose independent federation, again with fealty sworn to King Vince. However, the interior of the country, especially the dark eastern forest of the Tangles and the swamps and hills of Ogre Fen remain hostile. Rumors hold that the Baron still lives and is rebuilding his castle deep within the forests. However, any forces hidden there are small for now and certainly no threat to the three kings.

And so the War of the Reaches (886-890 TA) has come to an end. While casualties were high on both sides of the war, the forces of good were victorious. Dugald Axeworthy, William Markinghamshire, and Lady Laura joined the party in a great celebration at Dwarrowdelf in the late fall of 890. It was an affair to remember. Many toasts were made to victory and long-lasting peace. Only Hylax the Barker sat quietly in the corner smoking his pipe. With age had come wisdom, and with wisdom was the knowledge that another challenge lay just ahead. 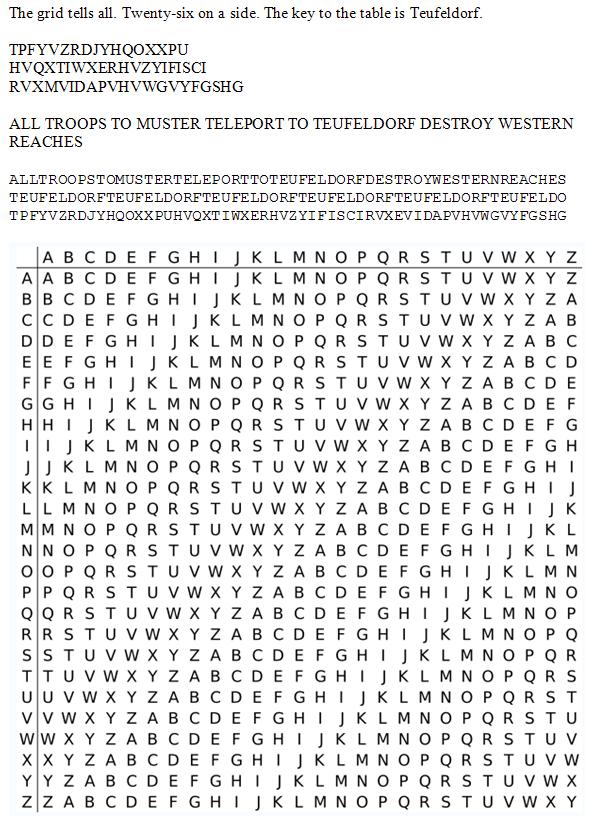