Silencing of the Watchman

On the banks of the River Phelegethon which runs into the Lake of Hell where Satan's Castle is built lies a small dwelling. A dwelling which belongs to a pit fiend known locally as the Watchman. Several months ago in an attempt to breach the Aether and escape the Reaches, the arch-devil Asmodeus sent the Watchman to research the answer to the riddle posed by the great guarding Hound at the Gates of Hell, the most direct route between the two places. The secret of the riddle was guarded by Sir Perry, the most trusted knight of St. Gilbert. A short time ago, Sir Perry was found dead from wounds caused by the jagged-toothed club of the Watchman. If the Watchman is not killed, burnt, and exercised before he returns to his master, all hell could break loose, literally. It is known that travel through the Aether would cause the Watchman to require much rest upon his return to Hell. Little time remains before the Watchman regains his full strength and makes his secret know throughout Hell.

This adventure actually takes place on the prison level of the Netherworld. This is an escape attempt facilitated by a Morgai-infected Navigator. The party will teleport through the Aether to the Netherworld. There they will either stop the escape or a new horror will be released upon Realm. 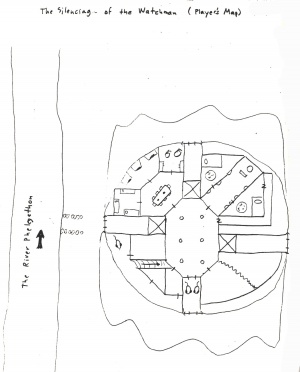 Hylax the Barker and Sir Zachary again took the newly initiated Sirfexx and Zephaniah under their protection. The knights of St. Gilbert had a quest of the most urgent nature. It would be the first of several trips to the Netherworld taken by Zephaniah the Good (tour guide to Hell). Only the legend and a player's map survive to tell the tale of the silencing of the Watchman. We do know that the four heroes intercepted the Watchman before he regained his powers, and the secret of Sir Perry was kept from the other denizens of Hell.

The only other notes about the Silencing of the Watchman adventure concern several magical items that the party took with them (thanks to the Knights of St. Gilbert). The items were used and returned to their unknown resting place.

Sir Rowland carried with him: