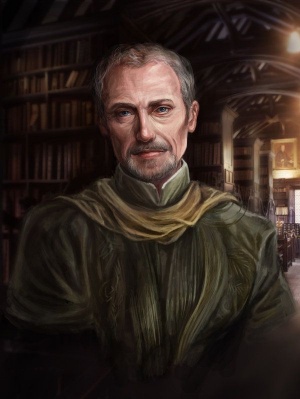 Tam Blackburn, Head of the Merchant's Guild and Master of Merchants

The Blackburn family is arguably the oldest and most powerful family in the Western Reaches with merchant ties to the City-State dating back to the fourth century TA. Ties to the merchant roots of the Old Kingdom go back even further.

Tam Blackburn is the family patriarch. He is a middle-age man with piercing grey eyes and an inscrutable countenance. Blackburn is the head of the Merchant's Guild and Master of Merchants within the Assembly. The most powerful member of the Assembly, the elder Blackburn is well-liked for his penchant for listening to both sides of an argument and making a fair judgment. He is also obsessed with understanding new fads and trends among the people - a habit that a lifetime of commerce has honed to an uncanny edge. The firm of Blackburn & Sons is the oldest continuously-operating business in the City-State.

The Blackburn family is subject to many rumors - but never a scandal. A fanatic for loyalty, few dare cross the Blackburns in business or personal affairs. For two centuries, the Blackburn sons have always chosen a single wife - without a single occurrence of divorce, bastards, or betrayal. And, each marriage has produced only sons - typically two or three. The Blackburn wives throw lavish parties while the sons are almost always engaged in business dealings.

Tam is an avid collector of many beautiful things - paintings, books, and sculptures. The Blackburn Estate in the Royal Quarter is lavish and stylish. The family avoids trading in magic and artifacts, preferring the stability of ships filled with coffee, cocoa and sugar.