The Crypt of Mind and Matter 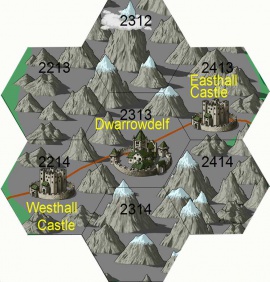 The next three portals are three keys,
Your fate is sealed, you cannot flee.

Within the bubble ancient most,
Float three tests that proudly boast,
No man nor beast nor god nor mortal,
Has passed by us and through the portal.

To where the sword is always kept,
And where the beast has always slept,
The door is closed, the keys are gone,
The way is barred, the path is long.

The swirling orb of red and white,
Boasts of magic and of might,
Defeat them both, survive the test,
Or slowly starve and then find death.

You find yourselves floating somewhat disconcertedly in a swirling black mist. There is an overwhelming sense of isolation here. Both Falstaff and Fuzzwort feel disconnected with their deities. Although most spells seem to work normally here, there is a feeling that teleportation might not be possible from such an isolated environment.

After a few moments, your eyes start to adjust to your new surroundings. From all appearances, you are trapped inside a massive soap bubble. To the outside, you can see a wall of shimmering darkness, powerful and forbidding. Facing towards the center of the bubble, you see three large orbs moving slowly around a central orb. Their motion seems to be random, although the three orbs never touch each other, and they are always the same distance from the central orb. The first orb swirls with red and white, the second orb is jet black, the third is ..... The center orb seems to be clear with some sort of a stone structure hovering in the middle of it.

As you approach the central orb, one of the circling orbs moves to intercept you. 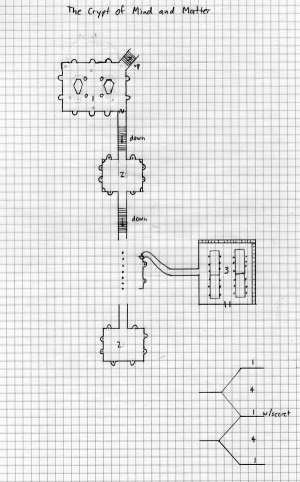 This large room is 80 feet by 60 feet with a low vaulted ceiling and a number of niches in all four walls. Four large squat stone pillars support the massive stone arches. A stone sarcophagus sits in the eastern portion of the room. On it rests the effigy of a man dressed in robes, his face worn smooth from time. The western portion of the room also boasts a sarcophagus. This time, the stone figure reclining on top is that of a man dressed in chain mail with a large shield. Set of stairs up from the northeast.

Careful inspection reveals that each of the coffin lids can be moved, revealing treasure underneath.

Almost immediately, the party will be attacked by rats from above and spirits from below. These will always target the character with the most number of hit points and spell points respectively. They will attack creatures blocking their way to their primary target, if needed.

Very careful examination shows a secret door in the southeast corner of this room.

[On the single room levels:] "A small set of stone stairs lead down into a 40 foot by 50 foot room. Pillars in the four corners of this room support a low arched ceiling. There are two niches on each wall. These contain 8 figures, covered with dust from an age long gone. Stairways leading down can be found on all four walls. The floors and walls of this room are plain stone.

[On the four room levels:] "A small set of stone stairs lead down into a 40 foot by 50 foot room. Pillars in the four corners of this room support a low arched ceiling. There are two niches on each wall. These contain 8 figures, covered with dust from an age long gone. A stairway leading down can be found on the same wall with the stairway leading up. The floors and walls of this room are plain stone.

In the niches are:

A secret door behind the pillar in the northeast corner of the room leads to a small curving passageway that opens into a large dark room. This corridor has a musty scent like that of very old books

This large room is dominated by four large tables which are pushed into two long study benches. Around the wooden tables are more than twenty large chairs of plain craftsmanship. Along the northern and eastern walls of this room are shelves lined with hundreds of large books, bound in leathers of all different hues. The musty scent is strong here. A set of double doors in the south wall are closed, the iron locks and hinges rusted shut with disuse. A faint flickering of blue and red electricity can be seen around the edges of the door.

If the door is approached, a magic mouth will appear and utter the following riddle:

Close to the words of life stay I,
But I wither, wane, and grow dry.

This is where the spellbooks and research of the twenty-five mages can be found. In addition, there is one holy book in the library. Inside is a pressed rose. The party must take the rose and put it against the door to unlock it. Otherwise, they find themselves back in Room 1. While they are searching, creatures will be coming through the door. 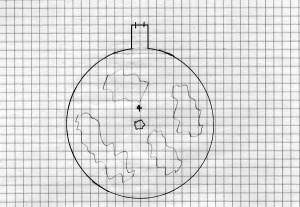 A short hallway connects this room with the library. The council chamber is a large spherical room unnaturally perfect in its dimensions. Several rows of benches encircle the room overlooking the bowl shaped bottom.

This creature appears as a translucent mage, identical to the one on the sarcophagus above. The wail of this creature is deafening to all that hear. It floats suspended in the center of a large room. 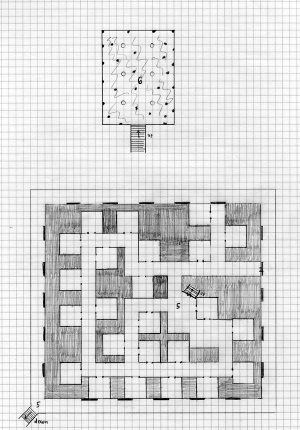 Room 5: The Corridor of Rath

A long hallway extends both north and east. On one side of the hallway are a number of shields decorated with angular designs of lines of different colors. At the top of the stairs, the following verse has been inscribed.

Careful examination shows that each shield has a different number of lines in its design.

You must replace both the first and last letter in each word with the letter following it in the alphabet. The proverb is, Touch nine before ten fear others.. By the way, the party is getting attacked by rats throughout this process.

A hallway leads into this maze of rooms, each made of plain stone and unadorned. The rooms have geometric patterns painted in the center, but are otherwise unfurnished.

These are the training rooms of the Fighters en-Kor. They will attack the party without fear. They have, through their years of training, the ability to re-direct damage inflicted on them to others of their order. All damage will be directed to one individual each round (or until he is dead). They fight as 18th level fighters. 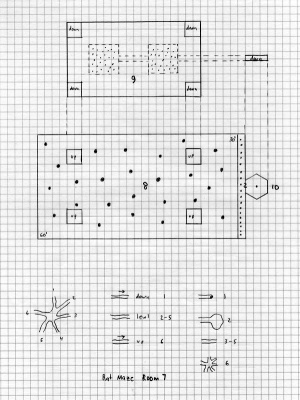 The Rat Maze is a jumble of small tubes and large burrows where the Rats of Rath live. They will shift extradimensionally as rats are killed and new ones conjured, so this will be a difficult maze to get through.

This large room has a number of interesting features. First, there are a number of patterns painted on the floor, worn smooth by the passing of countless feet. The patterns seems to be similar to those in the rooms below. The edges of the room are lined with a number of rat tunnel openings. Midway up the wall, a small ledge extends along the eastern wall. On the ledge are a number of bats. The ceiling of room is dominated by two large open areas. These areas are unnaturally dark, although some movement can be seen within.

These large chambers are connected by a large tunnel which extends to the east, ending in a tunnel that drops down into another chamber. The smell of guano is strong here, although there does not seem to be any signs of droppings. The ledges are filled with bats, with new ones appearing from down the tunnel when conjured.

This small hexagonal shaped room has an oddly domed roof with a large shaft protruding upward. The floor of the room is also cut at odd angles. Floating in the center of the room is a man dressed in chain mail and carrying two long swords, one in each hand.

Rath. AC -4. Immune to mind attacks and the like. Two attacks. 16d8 per hit. Rath gains hit points as he fights and damages opponents. He can cast two spells: Summon Rats of Rath (3) and Summon Bats of Rath (3).

Spirits of the Night: These creatures appear as the translucent mages, their flowing robes covering bodies decayed mostly to the bone. They seek to touch their victim, their mouths always open as if wailing." AC -8. Cannot be hit by any corporeal weapons. Two attacks. They suck 2d8 spell points per hit. There are an endless supply of these, assuming that Volrath has enough spell points to cast them. Each costs three spell points to cast. Volrath starts with 72 spell points. Other than Spirits of the Night, he can cast spells only when the party is in his room.

Volrath: This creature appears as a translucent mage, identical to the one on the sarcophagus above. The wail of this creature is deafening to all that hear. It floats suspended in the center of a large room." AC -8. Cannot be hit by any corporeal weapons. Two attacks. They suck 16d8 spell points per hit. Volrath cannot be killed except by depleting his spell points to zero. He favors the following spells: Conjure Spirits of the Night (3), Acidball (4), Firestorm (7), and Ice Storm (7).

Rats of Rath: These are very large rats with very sharp teeth. AC 0. Can blink like blink dogs, appearing 20 feet from their current position, at will. Two attacks. They do 3d8 per hit. There are an endless supply of these, assuming that Rath has enough hit points to conjure them. Each costs three hit points to conjure. Rath starts with 144 hit points. Other than Rats of Rath, he can summon Bats of Rath.

Bats of Rath: These are very large bats with very sharp teeth. AC 0. Can emit a sonic blast which stuns their opponent for 1d4 rounds (save at 18th secular for no effect). Two attacks. They do 3d8 per hit. There are an endless supply of these, assuming that Rath has enough hit points to conjure them. Each costs three hit points to conjure. Rath starts with 144 hit points. Other than Bats of Rath, he can summon Rats of Rath.