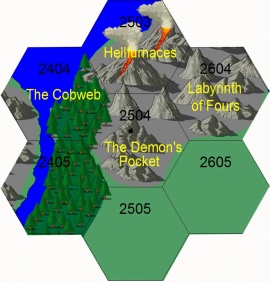 Recently, it has been said that yet another covenant of demons has been found. It is said to be a doorway straight to Hell. Not surprisingly the chest was found in the Demon's Pocket. The Pocket is a foul smelling sink hole from which poisonous gasses sometimes leaks.

Rumor also has it that the demon's covenants can be opened only on time of the full moon. It is said that an army of orcs have been preparing a religious ceremony in order to control the demons when they come out.

Adventure to The Demon's Pocket

Finally, our heroes journeyed to the Demon's Pocket in order to stop the plans of the orcs to open the Covenant. It was a mission of utmost importance to the defense of the Eastern Reaches. Again, the party decided that a stealthy entrance would be most effective. For the second time, U-Gene was held back from wading into the army of orcs and shaman that waited along the rim of the cleft. Trusting that the Covenant could only be opened on the night of the full moon, the party decided to check out the cave at the bottom of the cleft. The map of this dungeon was lost somehow, but what follows is what can be remembered of the campaign.

Those who could polymorph did so, those who could not flew on the magical flying carpet recently found in the Ether by Fuzzwort. Confident (but forgetting one thing), the party flew to the entrance of the cave. There, they met with an invisible wall of dispelling magic. The carpet was ruined, and its passengers tumbled to the floor of the cave. The polymorphed characters were returned to their natural form. Thinking quickly, they raced down the cave until they found what they were looking for. The party quickly dispatched the guardians of the covenant and sealed the the accursed coffer forever (or so they hoped).