The Dungeons Below Teufeldorf Manor 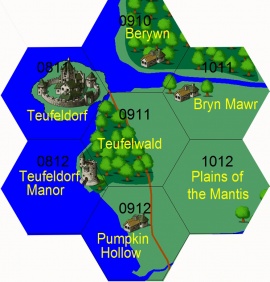 No maps and few legends remain regarding the crypts and passageways below Teufeldorf Manor. This expedition is still one of the more memorable ones, for it was here that the the party suffered its single greatest defeat to date. Five of the heroes set out to explore the labyrinth below Teufeldorf Manor, but none returned. Lord Treadway, Count Demoney III, Condor the Cleric, Father Guido Sarducci, and Ickin Namffoh perished here. All maps and documents as well as the fateful story itself disappeared with the adventurers, but their surviving companions, Sir Zachary and Hylax the Barker were able to learn a few details by means of certain spells.

Apparently, the group was set upon in a small room by a group of several carrion crawlers. The eight tentacled beasts first reached Ickin. His last words before being paralyzed and devoured were a cryptic curse upon someone named "Matney" who supposedly sucked. Father Guido took his death differently. The gloomy cleric cheered up at the last, and he charged one of the beasts, apparently trying to embrace its deadly tentacles. "Free at last" were his final words. Condor and Lord Treadway fought bravely, and together they slew most of the vermin. Condor eventually went down, as Treadway turned to attack the last of the crawlers.

Meanwhile, Count Demoney III, rune sword in hand, rushed out of the room back into the hallway. There he stood, wondering if he should try to go up into the manor to get help, or if he should risk going back into the room to see if Treadway had succeeded (or if he could reclaim the bodies). He finally choose the latter course. The Count climbed the wall and crept towards the arched entrance of the room. Unfortunately, he forgot that carrion crawlers can climb walls too. As he peered through the doorway, the last crawler struck him from above (no one knows why it crawled up there when its prey was on the floor). As he fell to the stone below, the Count saw Lord Treadway slumped over a wooden chest. His final thought was, "Who will care for Zachary and poor Hylax?"