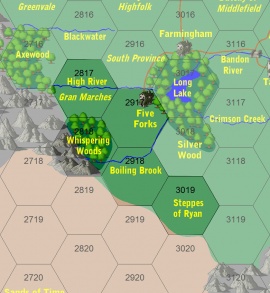 Known derisively as the Lesser March of Greenvale, the Gran March lies directly south of its more prosperous northern neighbor with its capital at Five Forks. The Gran March is primarily agrarian with large shipments of grain being delivered from Five Forks to the trading posts at Greenvale. With a hotter, drier climate and sandier soil, the numerous farms of the Gran March must also contend with raids from wild nomads from the Steppes of Ryan.

History of the Gran March

Fighting under the unified banner of the Southern Marches during the Second Demon War of 821-828 TA, the peoples of the Gran March were granted a Barony from the Crown in 831 TA under the leadership of Tomas Brownstone. The elderly Baron Brownstone is the only lord still in power from the war. In addition, Baron Brownstone has a fondness for breeding griffon mounts at several small ranches in the foothills north of the Whispering Woods. These griffons bring a small amount of revenue and large dose of pride to the Gran March.

Whispering Woods
Long ago a mighty wizard secluded himself in the lush valley at the headwaters of the Boiling Brook amidst the Shadowyarn Mountains. His servants posted the approaches to the area, warning all alike that entrance to the domain thus established was forbidden except by express invitation from its laird. What has transpired since the valley was claimed many decades ago is simply a matter of conjecture, for no one goes there.

There are, of course, tales of bold adventurers returning loaded with gold and gems which are said to litter the stream beds as pebbles do elsewhere, but even these stories are insufficient to cause much interest, as the area is positively known to be inhabited by horrible monsters. What is known for certain is that bodies of troops are sometimes seen near the verges of the Whispering Woods, and that mysterious groups sometimes journey in the direction of this place.

Boiling Brook
The Boiling Brook is so named for it swift current which rushes through a riverbed strewn with large boulders. It is famous for gemstones that are often pulled from its rushing waters. More importantly, though, the Boiling Brook is the most southerly tributary providing precious water for the farmers of the Gran Marches.

High River
The High River flows easterly out of the Shadowyarn Mountains, providing water for the fertile fields of the Eastern Reaches. The river has long been the territorial boundary of the Gran Marches in the south and the more wealthy dukedoms to the north. While often a source of minor skirmishes, especially in times of drought, the river is generally a peaceful, well-settled place as it meanders into the Long Lake.

Steppes of Ryan
The Steppes of Ryan (commonly known as "The Steppes") is a vast level (treeless) grassland that extends from the Sands of Time in the south to grasslands of the Eastern Reaches. This arid plain is about 200 miles east to west and up to 100 miles north to south. Although one of the largest features of the Eastern Reaches, it is virtually unpopulated. The heat and poor (sandy) soil coupled with its unfavorable defensive position make the Steppes an unlikely environment for human life. The steppes do teem, however, with a myriad of wildlife. Most notable are the lions, boars, and giant snakes for which the region is famous. The Steppes also suffer from massive fires during the hottest part of the summer.

In the past, nomad raiders coming north from the Sands of Time in the summer sometimes clash with the southern kingdoms in the area. These horse nomads are poorly armored but very mobile and fierce warriors. In recent times, sightings of the nomads has become less frequent.