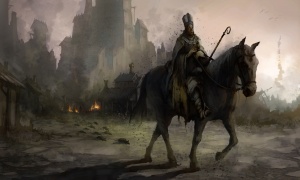 The origins of the Great Plague are unknown. The most well-respected researchers believe that the first cases were reported in the far western kingdoms of Rembia near the southern terminus of the Frostbrand Mountains. The most widely accepted date for the Great Plague is 1353 FA.

Early plague symptoms included a high fever, delirium and a blackening of the skin. The final stages were always the same - a bloating of the victim followed by an explosion of the body into a fine, black, oily mist. Most humans would move from first signs of illness to explosion in less than a day. Elves and dwarves sometime lasted up to three days. However, no survivors of any race were ever reported. Some rumors that the black mists sometimes moved against the wind and with apparent intelligence is unconfirmed. Nothing like the Great Plague had ever been seen, and medical and magical treatments were completely ineffective.

In late 1353 FA, a ship of Rembia was seen drifting towards the coast of Teufeldorf. Excited for news from their homeland, the ship was brought into port. What was found on the ship, however, was not welcome news. No living soul remained. Blackened bodies exploded as doctors and officials came to investigate. Quickly, the Great Plague moved into the Reaches with the same devastating effect as in Rembia. By the end of the year, the disease could be found throughout the Realm.

As quickly as it started, the Great Plague slowed and disappeared. Like a fast-burning forest fire, the fuel for the Great Plague was spent. In its wake, the remnants of civilization began to emerge. It would take twenty years for the fears of a relapse to disappear - children with black eyes would be sacrificed, the sick would sometimes be burned without any real symptoms of the disease. It would be a century before trade between nations resumed and life returned to its former vitality.

Historians have marked 1353 FA as the end of the First Age. The next year has been recorded as 1 SA - the beginning of the Second Age.